The release notes are short, but the change is big so keep reading for all of the details…

The update is being done on the back-end so you won’t need to update the app on your Smart TV or update your Tablo, but you should start seeing some performance improvements the next time you use the app.

This update significantly changes the way that the LG webOS app communicates with your Tablo. (For those of you who like the nerdy details, we have moved the majority of back & forth communication from Web Sockets to our REST API.)

This should make for a much more useful and enjoyable in-app experience, especially for those who have larger channel lineups.

However, because we’re using the new communication method, the app will no longer provide the following filters & features:

We are hoping to add these filters/features to the REST API so we can bring them back at a future date.

And BTW - the Tablo app is fully compatible with the latest LG webOS firmware – LG webOS 3.5!

We hope you like this update. If you have any questions or comments, let us know. 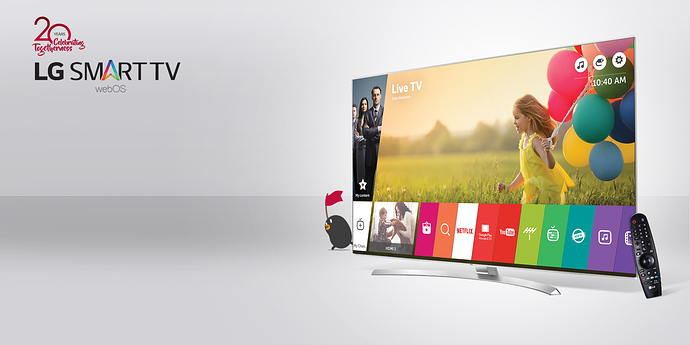 The app seems to work OK with one exception. I cannot seem to find a way to enable closed captions.

I cannot seem to find a way to enable closed captions.

The LG app unfortunately does not support closed captioning.

There is an improvement with overall speed, especially on first load. Very cool. The issue that I see is that trying to open the recording tabs first, I am unable to play a recording that I select. I select a program like CBS Evening Fake News and it stays on the top part of the screen without letting me access the recordings. I tried to play a live channel and that played a lot quicker than before. I then went back to play the recording and was able to successfully play it.

Still have work to do, but night an day difference. This is more like the awesome experience of the AppleTV rather than the FireTV. Keep up the good work DEV team!

I have an OLED WebOS 2.0 television.

I will soon be buying a new TV. Would you recommend an OLED vs a straight LED? Price notwithstanding, what would be the biggest difference in your opinion viewing-wise?

Would you recommend an OLED vs a straight LED?

OLED picture blows away non-OLED.
Each individual OLED pixel can turn off or on.
LED backlit screens have LEDs lighting up a range of pixels.
OLED black pixels are truely black.
Color range is also greater with OLED.

Best thing to do is compare OLED to non-OLED side by side.

They had them side by side at Costco last week and he is right - it will BLOW you away. (So will the price) OLED will be great, but I will have to wait until the price comes down.

I probably have the same TV. We’ll worth it. Huge contrast means it doesn’t have to overdo the bright spots like the Samsung’s, etc

OLED hands down. No edge bleeding and pure blacks. The image just pops. I have the curved version.

There aren’t the apps on Web OS that you’ll find on Samsung’s Tizen OS, but I use AppleTV and FireTV for most apps with the exception of the 4K Netflix and Amazon apps.

@TableSupport @TabloEngineering I’m still running 2.2.10 but I think the LG app on my LG 55" WebOS 2.0 TV did update. We started seeing some differences in how it we working (not filling in all the guide boxes is the biggest issue).

Is this due to not being at the current firmware on my Tablo box?

Is this due to not being at the current firmware on my Tablo box?

The guide boxes is definitely a current firmware issue. We recommend that everyone updates to 2.2.16 to avoid this.

I updated to 2.2.16 and the LG app is working much better, especially with live TV. I still notice some issues that may or may not be app related.

Any chance this app will also be added to the older LG smart tvs? My LG tv model didn’t make the cut for WebOS 2.0 upgrade, seems only the 4K tvs from my year got the upgrade

Any chance this app will also be added to the older LG smart tvs? My LG tv model didn’t make the cut for WebOS 2.0 upgrade, seems only the 4K tvs from my year got the upgrade

Sorry but that’s not likely

I’m betting that the lower end models didn’t have the horsepower required to run the 2.0 version apps, which is why they were left out of the upgrade.

Easy solution is to buy a Roku or an Amazon Fire TV and connect it up. It’s likely to be a better, faster, smoother experience.

Any future updates to LG Apps coming? Here are 2 features that I believe are in other apps that are needed in LG apps:

Another feature needed is not being able to view Latest shows recorded. The Preview App does a really nice job of this. Will LG App get the same interface as Preview? When?

1 Like
Watching recording start live instead of at beginning when recording not completed
ben1 October 2, 2018, 7:19pm #16

Almost 2 years since reporting these issues. Any fixes on the horizon?

The integration with webOS is way better than Chromecast. The only thing missing is Most recent recordings. Got an LG because Samsung’s “Tizen” does not support Tablo in Canada.

Any chance to get “most recent recordings” fixed in webOS and Firefox?

Yep, I like using the WebOS app for picture clarity on my LG - if only it had all the other options the Roku one has.