@CWallace my Tablo did the same thing. The first time I brought up the web interface after updating to 2.2.30 it showed no storage. Then as I was wondering what my next step would be, it automagically found the hard drive. All good after that.

I did have an interesting issue updating to 2.2.30. when I brought up the web interface in Chrome, it asked me if I wanted the update. At the time there was a recording in progress, so I clicked upgrade later.

A few hours later I went back into the web interface and I was greeted with the screen that said update in progress, but I had never clicked okay to perform the update. I let it sit at that screen for 30 seconds, decided it wasn’t doing anything and clicked the x. When I closed the web app and reopened then I was greeted with the standard firmware update dialog, showing the fixes and enhancements. 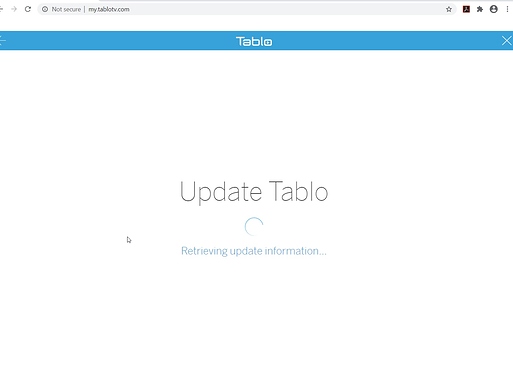 You never said if the recording got chopped due to the upgrade.

Maybe they have added some new AI software that decided this update would really be good for you. Or maybe later now means after the recordings has completed.

No problems with the recording! First time I’ve ever seen that message/behavior when updating the firmware. I will add an image of the message when I get back to my PC.

I began restarting my modem, router, Ooma Telo, and Tablo4/HD a few years ago because of some long forgotten issues with my Table and my problems were solved. I use an inline power timer that shuts down the system daily for five minutes in the wee hours of the morning and everything seems to work better.

and my problems were solved

well, not really - what is/was the problem(s)? it’s either stable or something is flubbed up and you power cycle the entire system…

The 2.2.30 release has been made available to all Tablo units now.

If you’re still not seeing the prompt to update by this afternoon, go to the web app at my.tablotv.com and look for this section in SETTINGS: 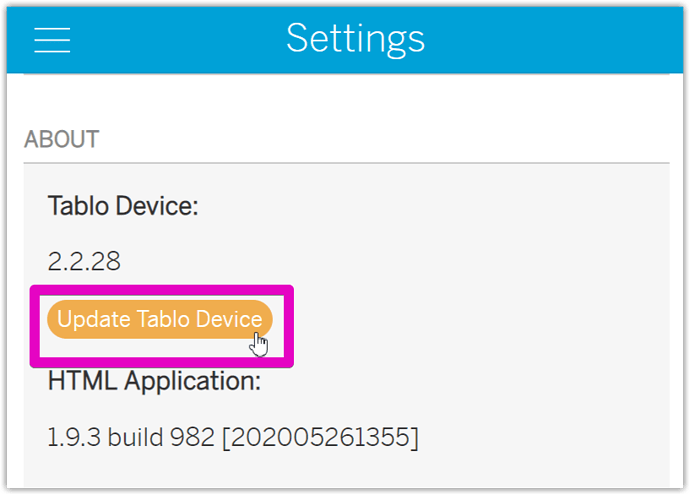 I was prompted to do the update yesterday. I’ve noticed a faster live channel loading time and It’s the first time that I’m getting 22.x channels (ABC, Quest, etc.). I’m located in Longueuil (Southshore of Montreal). I’m using a Fire tv stick with ethernet connexion and the app also got updated.
The only problem I see with my Fire TV stick is that the app is usually slow when loading new schedule data or when starting up. This is weird because on my Roku, the app is blazing fast.
I used to watch live TV with my HD Homerun but since this firmware update I’m starting to use my Tablo for live TV because of faster live TV loading times.
Thanks for this update! Keep up the good work!

The commercial skip feature has failed for every show since 2:00 AM (EDT) July 3, which is approximately the time I updated my Tablo Quad 4 to 2.2.30.

This is unrelated to the update and has now been resolved.

FYI for anyone else seeing this:

The 2.2.30 release has been made available to all Tablo units now.

tablo1 had been updated to 2.2.28 and now has the option for 2.2.28. Previous post question incremental updates, or update to most current -

As of July 6th, the release is now available for all Tablo units.

Do I have to wait until the end of the day…

Do I have to wait until the end of the day…

When it is powered on, your Tablo checks every 4 12 hours to see if an update is available.

If you want to check ASAP, just hit the blue reset button once quickly. During the reboot process, your Tablo will do a version check and should display the update afterwards.

Thank you for investigating and addressing the commercial skip issue that I was having. Everything seems to be performing well. All of you at Tablo customer service are the best!

But it’s not like over the last two weeks, you couldn’t have been pro-active and taken 5 minutes and upgraded to 2.2.28. Thus eliminating any potential double upgrade issues.

In my experience when there is any major issue going from an old prior firmware to the newest, Nuvyyo has things it up so that your unit upgrades in stages, from that Tablo’s installed firmware X to interim firmware Y (not necessarily the one immediately following X but the right incremental step in their coders’ views) and then to current firmware Z. I don’t think this needs to be worried about.

The only issue in an arcane way that I can think of might be that since you can “rollback” only to the last installed firmware, if you are on, say, 2.2.26 and the Tablo does choose to first install 2.2.28 before 2.2.30 (rather than jumping straight to 2.2.30 if the coders have determined that will work fine), any rollback would be to 2.2.28 rather than the long-experienced 2.2.26.

Someone must think it’s a problem since the double upgrade didn’t occur before the end of the 2.2.30 staged rollout.

And it’s a wasted of resources if tablo wastes any time working on it.

But it’s not like over the last two weeks, you couldn’t have been pro-active and taken 5 minutes and upgraded to 2.2.28.

Someone must think it’s a problem since the double upgrade didn’t occur before the end of the 2.2.30 staged rollout.

apparently it hadn’t ended, it’s just the beginning of the end, “day of the week”, isn’t the “time of day” when the rollout is complete… so if/when someone wants to upgrade, it can be a single rolled-up, upgrade.

Tablo does choose to first install 2.2.28 before 2.2.30 (rather than jumping straight to 2.2.30 if the coders have determined that will work fine)

It does say 2.2.30 is ready, but in the release notes, along with noting the versions, it goes to show the reversion of each as well:

It’s odd that’s all, when there’s just the one, it never tells you the reversion. I had seen in the backup DB is keeps a record of which versions and revisions had been installed - just say’n.

When it is powered on, your Tablo checks every 4 hours to see if an update is available.

When it is powered on, your Tablo checks every 12 hours to see if an update is available.

Is this “new in 2.2.30” - • Other reliability and performance enhancements

Can @TabloSupport confirm which contradiction is correct.

Can @TabloSupport confirm which contradiction is correct.

It is 12 hours. Apologies for sharing the incorrect information previously.

It’s good to know that after 54+ years tablo is using what was called patch level has morphed into the sanitized and politically correct name - Release Candidate.

Of course we would all love to know if tablo is using Agile software Development and building RC’s on every code checkin. Maybe some modified version of waterfall development.

But alas I have one of my tablo units have turned off. I need to turn it on, and perform my 5 minute upgrade. I wouldn’t want to get caught in the double upgrade trap.