For those of you rocking the Amazon Fire TV 4K dongle, the Tablo app (v. 1.3.4) has been updated to support your newest toy! 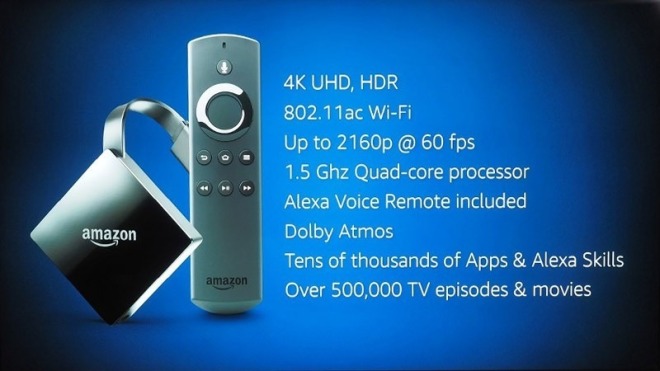 If you see any further compatibility or playback issues, please let us know!

Same goes for me. Device is 2.2.16 and fire tv app is 1.3.4 build 8000117. I don’t notice any improvement on the studder compared to the prior version. It may not be an obvious studder if watching a fast moving action scene but it’s more obvious if you are watching a consistent slow scene with a car driving down the road. It’s also not noticeable if the picture is still. Annoying enough where I haven’t ditched my dish yet.

What recording quality are you guys using? We’ll take a closer look at this today.

Can you try reducing your recording quality to 720? There have been anecdotal reports from other apps of the device having trouble delivering 1080 streams.

NOTE - changing your recording quality will affect live TV immediately, but will only affect NEW recordings.

It still stutters at 720

I am also using HD 1080 (best resolution). Before the fix, I also tried 720 and saw the issue. Today, I even tried the SD 480 which is barely noticeable but there’s still something wrong with the picture even at that res. I easily see the issue at 720 (3 Mbps) and higher. I have watched YouTube HD and Amazon 4K without seeing any issues. Only Tablo seems to be an issue.

For what it’s worth, I have 3 new Fire devices on different TV’s (Vizio and LG) and they all have the same problem.

Got the recent update several days ago – still same problem. Tried to watch the NFL game last night on NBC, but had to switch to Prime Amazon in order to not have all the jumpy video’s. Off course Prime Amazon decided to go down about the same time and I had to turn to the NFL App on my phone to find out the score. Can’t we get another update? Thanks.

I just hooked up a new Fire TV and am having the same stutter on the Tablo app. All the other apps work fine. Tried it on multiple TVs and had the stutter every time.

Like others in this thread, getting a momentary stutter every couple of seconds w/the newest FireTV - particularly noticeable watching sports. I am disappointed to see others experiencing this problem, but am somewhat relieved as I thought I may be having an issue w/a brand new home theater receiver setup.

Any updates/fixes appreciated, TabloTV. For the record, I also have a previous gen FireTV connected to Tablo on a separate smart tv w/no issue.

I am seeing the stutter as well with the new FireTV. Like mentioned above, it is very noticeable watching football (happening once every few seconds). It have tried it set at 720 and 1080. I have a 2nd gen Fire Stick that works perfectly on all resolutions…

Something else that I noticed is that it seems the syncing enhancement that was made several weeks ago (saw it on LG TV) must not be applied to this new Amazon fire build or wasn’t it applied to Amazon fire at all? I saw the Syncing header above the menu and then I opened a recording to see missing episodes that didn’t appear until after the syncing menu header disappeared.

Just tried Tablo Preview on the new version and I can confirm it has the same studdering issue. I have it capture on video. Here’s a link: https://youtu.be/YeToTPrS4MQ

Just wanted to chime in to let you know what we know so far:

Unfortunately, we don’t currently have an ETA on a fix as our team is focused on completing other updates that will benefit the entire user base.

Can you provide names of a couple of those other streaming video services? The 2 that I checked (YouTube & Amazon Video) do not have this same issue.

Regarding an ETA, are you thinking days, weeks, or months to get a fix?