@JDW We’ve seen anecdotal reports of this same issue on PLEX and other apps that stream OTA TV. The file formats and styles YouTube and Amazon are sending are much different.

Unfortunately I don’t have a specific ETA to share since we haven’t fully wrapped our head around the problem.

Definitely just the new 4K Fire TV device, I swapped it out for my old 2nd gen. fire stick and it’s working fine, no stutter.

That’s good to know. Hopefully a fix is found soon. I just love my Tablo Setup too much to switch to something else.

Any updates on the ETA for the fix?

Any updates on the ETA for the fix?

We’ve got something in mind that MIGHT fix the issue but haven’t had a chance to test it out yet. Wish I had better news!

Trying to stay tuned but it keeps stuttering…

Thanks. I thought I was losing my mind but that youtube video is exactly what I see with a new firetv dongle. I’m brand new to tablo and was immediately discouraged by this. I thought it might be because I’m watching an older TV. I went to another room, and fired up tablo thru a roku stick and it was perfect. The wife is used to the firetv interface, doesn’t like the roku. Firetv is clearly more user friendly than the roku for tablo. This might be a deal breaker for the tablo here. Hope a solution is close.

Do you have any older Fire TV’s? The problem is only with the new Fire TV pendants.

unfortunately no. After 15 years, I just called Direct TV and told them to turn it off. Bought a tablo and couple new firetv boxes. I was surprised when the dongles [pendants] showed up. I was expecting the boxes. I had a couple old roku devices I still use for less used tv’s, garage, basement.

Funny, I’m waiting to tell Dish the same thing. I have 3 new amazon fire devices and 1 old version. I can’t switch until the studder if fixed.

You’re smarter than I am, or more controlled. I might’ve snapped a little. Now I’m developing a twitch. I keep thinking I’ll just adapt and not notice stutter. I need to evolve quicker

I believe you can find some 2nd Gen Fire TV’s on ebay, but it wouldn’t make much sense to spend the money on them if you can get by with the old Roku’s until the problem is resolved with the new Fire TV’s.

Any update? I’m getting close to taking this thing back because we watch a lot of tv on tablo. I really like the fire tv EXCEPT for this issue

Search the other topic I just added for YouTube being dropped on Amazon Fire TV. Maybe that will make you want to return it.

Any update? I’m getting close to taking this thing back because we watch a lot of tv on tablo. I really like the fire tv EXCEPT for this issue

Sorry, but no update here yet.

We believe the problem is deep down in the guts of how this new device processes video. It’s going to take some significant tinkering on our end to tapdance around this problem. We’re keeping an eye out for an update on the Amazon side as well.

will this thing work properly with tablo? 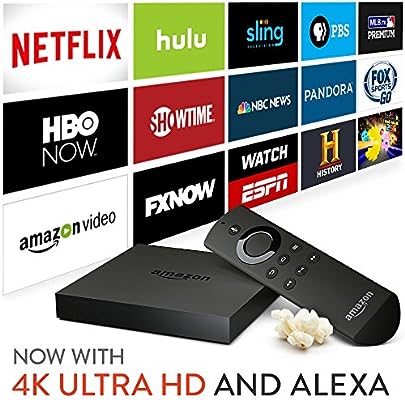 With tens of thousands of channels, apps, and Alexa skills, Amazon Fire TV offers all your favorite subscriptions and streaming services. Fire TV delivers the content you love in up to 4K Ultra HD res ...

Yep - it’s just the newest version that has the weird video issue. I use the FireTV stick at home, we’ve got several boxes here in the office, and I have an Element Fire TV television at my desk. All ticking along just fine…

After being the person that started this topic, I can now say that I solved the problem…just not as you might expect. Read the other post “YouTube being dropped on Amazon Fire TV.”. I returned my new amazon fire devices and bought the mibox at Walmart with Android TV. It’s working great for everything, including not having this studdering issue. It’s also less expensive at Walmart than the amazon fire tv. So glad that I can now drop Dish Network and move on with life.

@JDW - Glad you were able to get this sorted out, but sorry you ran into this studder issue in the first place.

The Mi Box is underappreciated so I think you’ll enjoy it.