Yea, it’s not that straight forward -

my.tablotv.com no longer loads with DuckDuckGo Privacy Essentials enabled via Chrome browser extension. At DuckDuckGo, we believe the Internet shouldn’t feel so creepy, and getting the privacy you deserve online should be as simple as closing the blinds. It wants to block cdn.amplitude.com and at times api.amplitude.com however when I open my.tablotv.com in Firefox with it’s own tracking protection enabled, blocking cdn.amplitude.com, it loads alright. :shrug: (Yes, Privacy Essentials in Fir…


Tells a bit what I did. Even blocking the sites DDG Privacy wants to block by other means - it still loads.

I had even enabled ad blocking on my router and added those 2 sites with the same results. DDG Privacy wouldn’t load just knowing, disabling it works. Even with both blocked it works with other browsers.

Me, I concluded it was an error with DDG Privacy because nothing changed with Nuvyyo’s my.tablotv.com web app 1.7.1 build 913 while DDG Privacy was update 9/12.

I haven’t don’t any further problem solving or investigating since, this is just my own results.

Not all versions of Chrome and FireFox are supported. Older versions may not be.

And this wouldn’t be the first time an update on the cloud could affect functionality. We are approaching 6 months since the last firmware update. There could be an update in a little while and they often update the cloud app before a firmware update. I use to be able to tell if there was an update by the HTML time stamp on the settings page.

But after they knocked my browsers down with the April update I stick with Roku. I only used the browsers for management and now Roku has all the functionality I need.

I don’t believe anyone should seriously expected old versions to be truly supported, if their vendor no longer supports them, nobody will.

Other than management, I have little to no reason to access tablo’s UI. I would get tired of changing the foil wrap on a Roku with it’s data collection and analytical mining business.

That is fine with me. Where does www.tablotv.com indicate what browser versions it supports. If it doesn’t then it supports all of them.

Or is it also an OS version issue.

I suspect it is a mac os problem since I just installed macosupd 10.14.6 supplemental update 2 last week

As I posted prior in this topic, it doesn’t exclude any, just not fully support all. Look here https://www.tablotv.com/apps-compatible-devices/.

Generally, the web/internet isn’t platform dependent. Excluding Microsoft, many browsers work across a variety of OSs, not all. But you already know all this …and then some.

You could have an older android tablet that has an HTML5 compliant browser and it might have totally stopped working, for tablo only, after the April HTML update.

It could not play recordings since it predated android 4.1 which was the first release of h.264. But it could do everything else.

Yea, because android devices, with their own apps never came along with the topic of access my.tablotv.com.

Are you bored, still waiting or your foil order or get your meds mixed up - or just never want to start your own topic so you’ll see which one will go your way?

I’m sure that’s why my Windows browsers stopped working.

But I’m only providing the information that some users might want to check, when things get funky, to see if in the settings page the HTML version has changed.

+1 for the DuckDuckGo Privacy Essentials. I’m with the other poster, wondering what Tablo is doing that causes the concern, but at least it’s working again.

Me, I concluded it was an error with DDG Privacy because nothing changed with Nuvyyo’s my.tablotv.com web app 1.7.1 build 913 while DDG Privacy was update 9/12. That’s about when it started. You do know they’ve always tried to collect data about you… right.

I can confirm
My.tablotv.com is NOT working in Chrome or Safari only in Firefox AND incognito windows on Chrome

I have no idea what not working means since the thread started out where the WEB app wouldn’t load.

If it works in the Chrome incognito window and not the regular window it’s usually because the tablo app cache is incorrect. And the first thing to do if the WEB app loads is to delete the cache. There is usually a red x in the lower right hand of the tablo name. You hit that and clear the cache. Then you search and re-add the unit and connect.

You’ve confirmed you have no extensions such or settings interfering? …cause 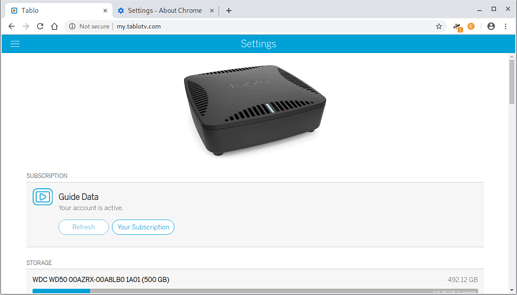 Read up on Compatible Apps & Devices, look for the sections " Tablo Compatible Mobile Devices & PCs" and click on the [MAC & PC] button —

Optimized VS not fully supported - most/many work, some better than others.

I just had this issue as well. The solution for me was to disable the HTTPS HTTPS Everywhere Chrome Extension for my.tablo.com. Then, I could access my device again.