I was forced to do a factory reset on my Tablo. There are a few shows I’d like to salvage from the box, and it was suggested I use Tablo Exporter. I downloaded the file and now I have absolutely NO clue what to do next. I extracted the zip file and I now have a file on my desktop “TabloExporer.jar” (I have the latest Java version installed). What next? Double clicking the .jar file does nothing. What am I missing. I need very specific steps please. I’m an old lady and only semi techie. TYIA

If you are double clicking and it does nothing there is probably an error.

In order to see the error you would need to run via command line java -jar TabloExport.jar

However, if you reset your Tablo there are no shows you are going to be able to get off of there anyway. Who told you to hard reset and then get shows off??

The tech support guy said the shows will still be there as long as I don’t allow the Tablo to run it’s maintenance during the night. I unplugged it over night, so according to him the shows should still be there.

From the command line, I get “Error: Unable to access TabloExport.jar”

You have to give the full path to the jar file

The shows may still be on the hard drive, but any of the export programs on this site require the Tablo to report what shows exist and then provide the info to get them. If you hard reset, it will not be able to do so. If 'tech support" told you to hard reset then they should provide help in recovering your shows.

Then I guess there’s no point it pursing this Exporter any further since the Tablo shows only what recorded last night before I unplugged it. Thanks for your help in any case.

How do I remove Tablo Exporter?

It’s just files, you can just delete them, no install or anything

I tried to delete the file on the desktop. This is what I get: 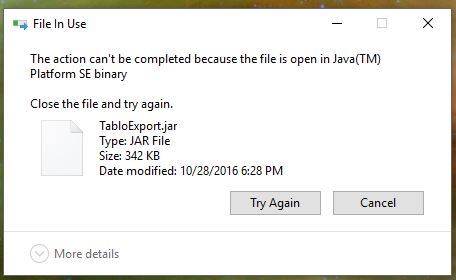 Looks like you can either kill the java.exe task or reboot,

Rebooting did the trick. Thanks for all your help.

I export all my recordings weekly so that should my Tablo fail (and has to be reset) I will still have all the recordings available. I put them on a USB drive I can hook into my Roku for viewing them independently of the Tablo. It’s a form of backup.

One of the reasons we do that is my wife is hooked on a PBS show called “Cook’s Country.” She gets plenty of recipes from them. If we ever lost those videos, it would be a disaster. So we archive at least those programs we feel we’ll need in the future.

Since you are on Windows, I would suggest looking at Tablo Ripper. That way you can set it and forget it

In an attempt to avoid cross-posting rules (another user suggested I might get the app author (or someone knowlegeable) at this thread) I’ll just post a link describing my problem with an increasing number of Tablo files that fail upon export, and why that might be (fyi, I’m running TExporter on a networked Mac (10.12.3) while the Tablo itself is connected to another Mac (10.10.5)):

How to extract files from your Tablo General Discussion

I've been using TabloExporter for a few months. At first it was flawless. Everything recorded could be extracted to my local HD. Lately (past 6 weeks or so) I'm running into files that inexplicably fail, seemingly randomly--new files MAY extract, but they also might not. They all play back fine through the Tablo interface; I just can't extract them for some reason. I've tried all the usual things. Reinstalling TExporter, reestablishing the Save To directory to a new directory; at one point …

I don’t believe there are any posting rules at all to be honest.

But, I would need for you to run via command line with the -debug switch to see what is happening on the failing recording.

Look near the top of this thread to see how to do that.

Here’s what the app is outputting with an open cli (I think I did this right? I just ran the command listed at the top of this thread with -debug)
Java Version; 1.8.0_121
Tablo Exporter Version 0.07a build 117

Ok, may need to wait for next weeks SNL to see if I can duplicate. Does it do this on all SNL recorded after the firmware update? Any other shows?