I am a long time Tablo user, having multiple units in both my homes. They work great for me, and I supplement OTA with Philo and Netflix. Although I started with Fire sticks, eventually I changed over mostly to Roku sticks. I also play around with a HDHomerun.

When the Amazon Fire Recast came out I dismissed it as too expensive and feature poor, and ignored it. Recently Best Buy had the 2 tuner 500gb on sale for $129, and I thought what the heck, might be fun to play with. The new Fire sticks were also on sale for $14.99 so I got a couple of those.

Hookup was easy and the tuners seemed to be “stronger” than a Tablo even when added after a splitter. But, then I discovered the new features that had been added after introduction.

With the Fire sticks I get a channel guide that integrates OTA and Philo streaming channels, and allows designation of favorites for both that appear at the top of the guide. I found out that PS Vue will also integrate, although no other streaming services do.

I am torn because of the convenience of the integrated channel guide. I still love my Tablo but wish it had this added feature of the Recast. I know there are still other limitations on the recast, but the integrated guide is really great.

So, yes, I have Tablo, I have HDHomerun, and I have Recast, so I can watch and record in multiple ways. I like to tinker, and I definitely have plenty to tinker with.

So now you need a 48hr day, so you can really have the time to work through things!

I get indecisive, and struggle with my own obsessive issues - I’m afraid to try another one. I’ve got my dealing with tablo tweaked to where I’m comfortable.

I understand each, tablo and fire recast, have some big differences. For some may matter, others don’t know/care. Although not necessarily limiting, each may have their own market.

Fire recast is very Amazon oriented, works with Amazon Fire stuff and more. Gives Amazon tighter control since it’s theirs all around. If you have an Amazon household, great - works with Alexa. Limits resolution, but on some devices you may not notice or care. You can only have a single recast to you account. Even with 4 tuners, you can only watch 2 at a time, well only 2 devices total for watching. Parental Controls!

Tablo works across various devices, not all equally (but not deficient). Out of home viewing, with subscription. No Parental controls. You can’t talk to it (no Alexa integration). Fee for 14 day schedule and advanced recording features.

For example. None of these are alone are necessarily deal breakers for everyone. Just different, for different needs.

Does the Recast not have out of home viewing?

I found out that PS Vue will also integrate, although no other streaming services do.

Not correct. Pluto integrates, and you can filter down their huge list to those that you actually wish to appear in the guide.

Amazon Recast DVR is nearly three weeks away from release date. Since it’s announcement, there have been pre-release changes and improvements, it’s been evolving even before coming through the starting gate. Pluto TV channels will be available in the Recast Guide / Grid, right along with your OTA channel lineup. Users may select all, some or none, to appear in the guide. For those who wish to incorporate some or all of Pluto’s offerings, they will not be mixed in with OTA, but appear in a separ…

That’s good about Pluto, I didn’t think about them.

I also have both a Tablo 64 and a dual tuner Recast. I originally went with a four tuner Recast but sent it back because I had problems with our local PBS that broadcasts on VHF 8. A few days ago Best Buy offered Recasts at the Prime Day price so I got the dual tuner model hoping it was the four-way signal split that was causing me problems.Seems like it is the tuners Amazon uses as I have the same, maybe reduced, problem of macro-blocking only on VHF 8.

Two TVs, the Tablo, and even a USB tuner hooked up to a PC with Media Center show very good signals on every antenna I have tried but the Recast doesn’t like VHF 8. I will keep it because for everything else it is convenient as it is instantly available, unlike the Tablo app which has to load up each time I want to use it. But the Tablo tuners have been quite solid and, thanks to user-generated apps, I can archive shows with ease. Recorded shows on the Recast need to be transcoded each time for viewing which makes playback a little clunkier than on the Tablo where they are transcoded as they are written to disk and play back very smoothly with rewind and FF very quick.

If I had to choose (thankfully, I don’t) I would go with the Tablo because of its tuners. Perhaps, to compete better with Amazon, Roku would consider granting users the ability to designate privileged channels so Tablo could be kept in memory for quick, casual TV viewing.

I will keep it because for everything else it is convenient as it is instantly available, unlike the Tablo app which has to load up each time I want to use it.

I assume you’re using the original app on your Fire TV… Try downloading the app marked Tablo PREVIEW. It doesn’t have to sync before you can use it.

Fire TV Recast is capable of receiving all ATSC broadcast resolutions, including 1080i and 720p. When streaming to other devices, Fire TV Recast transcodes 1080i streams to a resolution up to 1440x720p using H.264. This is to ensure that all Fire TV streaming media players work with Fire TV Recast, and to deliver more reliable video streams over Wi-Fi.

While tablo is basically limited to the broadcast’s quality (I doubt it “up-scales”)
https://www.tablotv.com/blog/tablo-dvr-live-tv-recording-quality-settings/ 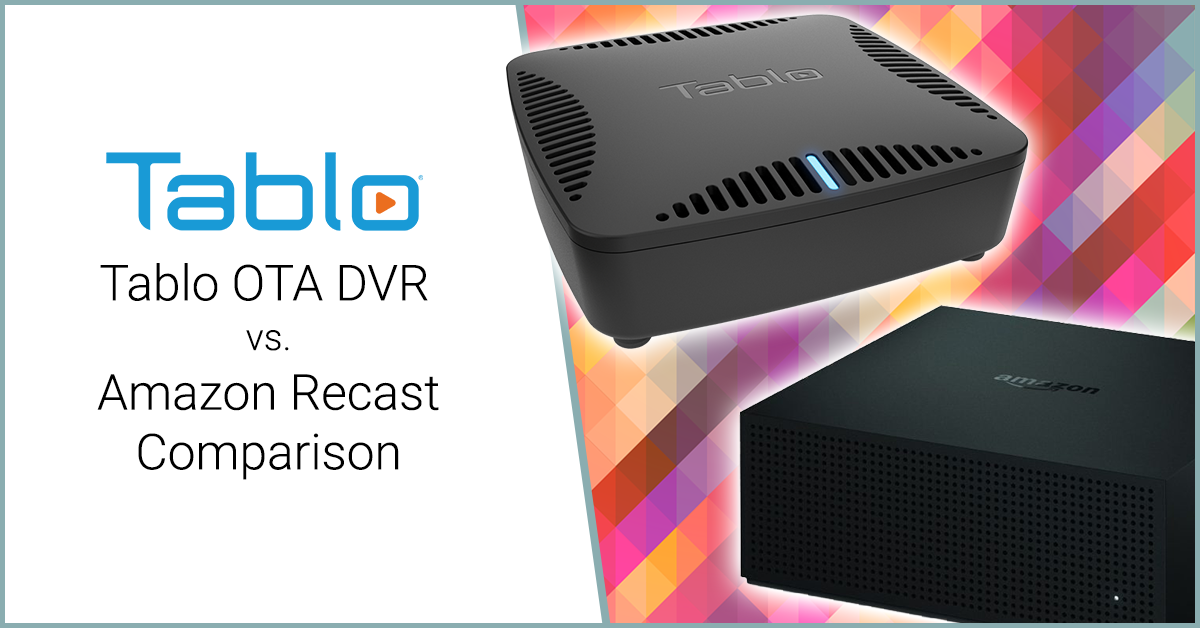 If you’re trying to decide between a Tablo OTA DVR or the new Amazon Fire TV Recast for the Over-the-Air (OTA) DVR portion of your cord cutting setup, this product and feature comparison will help.

I tried an Amazon fire TV made by Insignia. The one cool feature it had was it integrated antenna and Pluto channels in the guide. However the Insignia TV itself sucked so I returned it for a Roku TV. I find the Roku to be so much easier and not as cluttered as Amazon. The guide was a nice feature though but still glad I went with Roku.

I have a Tablo Dual 64 (previous had a 4 Tuner Tablo), also a 4 tuner Recast, and a couple of TiVo Bolts. The major differences between Tablo and the Recast:

a.) TiVo is a “solar system” arrangement, where TiVo intends to be the center of the universe where all viewing methods orbit (television viewing, time shift recording, streaming content).

b.) Tablo is a planet- independent of other apps or processes, but accessible from the parts of the system.

c.) The Recast is a lunar object; like a moon, it’s tightly associated with a planet in the system, but is interdependent with the planet, and thus works in the background.

No one method is best, each have strengths and weaknesses.

3.) IMHO the Recast does a superior job in transcoding of MPEG-2 source material from over the air, compared to Tablo. This is especially noticeable on SD source content (as is found on most sub-channel networks). Tablo is blessed with some de-interlacing issues on SD source material that create mouse-toothing on angular lines, moire patterns, and other artifacts and softening. On the Recast, you have to look very hard to detect any issues in comparison to a live MPEG tuner image.

4.) That said, when that transcode process occurs creates a fundamental usage difference. The Recast records in native format, and transcodes on the fly as the recorded/live signal is streamed. The Recast limits the number of simultaneous transcode streams to two- so even on a four tuner model, live and or recorded content can be accessed on only two channels, concurrently. Tablo transcodes as the source is recorded, but allows up to six concurrent viewing streams to be active.

Unless the TV that is being used does a bad job upscaling 720p/60 material, the resolution from the Recast is not a limiting factor.

For most folks, the choice will come down to the comfort of using the AFT system and all that entails, and the limitation of two concurrent screens.

No one method is best, each have strengths and weaknesses.

I like your astronomy analogy. Although I haven’t tried others, researching, yes, there are vast differences, for different uses.

Unfortunately marketing tries to tell consumers which features are superior, weather or not it’s going to meet their needs - or exceed things to the point of complexity.

Due to government mandates you can receive crystal clear free over the air HD TV! Absolutely free with this special HD antenna! Unscrambled! Call Now!

Just curious, if Tablo streams to multiple devices, why would you need more than one on the same network?

Access.
It’s a consumer, home device - generally most households just have the one (I have no stats for this). So… why not?

Only 4 tuners, you want 8 tuners. Or his and hers Tablo units.

why would you need more than one on the same network

I was speaking with a friend last night who has a recast, he’s able to get the Tucson and Phoenix channels and the devices handles it without issue, no conflicts in guide data, etc. I’m wondering if I can do the same with the Tablo. Then again I could also just look at the Recast. It’s Amazon and they have more money then they know what to do with, so you know the feature set will come.

Edit: So the recast only does 720p? Having a 4k LG OLED 720p is insulting. The Tablo at least has 1080p on channels that have it. Then again ATSC 3.0 is going to change everything once it ever comes out.