I rearranged the graphs at one point, but have not yet tried to make them auto-scale properly based on screen size.

Thanks! This is pedantry to the Nth degree, but would it make sense to use weeks instead of months so the calculation is not +/- 24 hours as with a 30/31 day month? (It says a lot about how good your program is that such a trivial matter has any place in this discussion … but to be clear, I’m not sure even then such a trivial observation is warranted. I blame it on too much TV.)

What Recording Quality setting? and the channel’s resolution?

These would, as I understand, have an impact on the amount of data being stored - inversely impact processing time? y/n?

Yup, that’s fair. I should have qualified that as “HD1080 enabled on a recording that was 1080” which I believe is going to be the largest file/amount of data and worst case time scenario, though obviously the “best” video.

The device is also a factor - I have no idea how more/less performant other models are, but that will have some sort of impact. The network can be a factor, but given a typical home setup, rarely is going to factor in.

Honestly, if I wanted to get 8 months of recordings off, I’d probably go straight at the external drive. I don’t see myself adding that to this, but who knows if I’ll eventually get bored and try to do it.

That’s where the part about “someday” you may have a CLI for tablo-tools.

I have capto, with wrapto for refinement, via scripts emptying my tablos overnight.

The extreme flexibility - this is the only place to save same [type] of recording and it has to be named, the way it’s named, of course sitcoms have titles, no matter how long it actually is. Or if you want episode title and and sXeX is pointless you you have a file structure that only makes sense to you.

Yes, those are CLI apps for only a specific purpose, which they are excellent with!
tablo-tools goes beyond with search beyond, way beyond and details at glance - and then some

there is no zoom +/- possibly contributes to limiting text, it’s really limiting if you have an HTPC, media PC with a TV as a monitor haveing a screen res of 1280x720 and you’re looking at a show with maybe 19 episodes, but you can only scroll 4or5 at at time, with the windows maximized 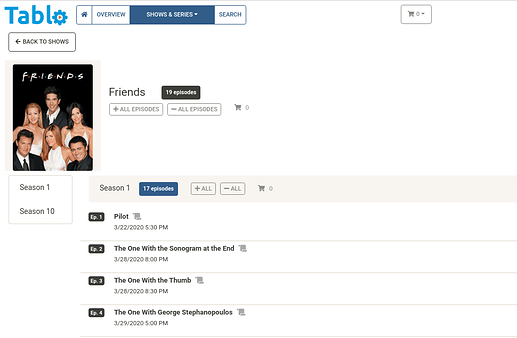 fyi, if I choose Toggle Full Screen from the menu… the only way to exit is F11? No annoying floating [X] or an extremely functional context menu - menu to activate aka mouse / keyboard to disable (keyboard does both)

Wrt to naming - my hope is to figure out a reasonable way for people to create name formats/templates to control that stuff when exporting.

other than free form?
Here’s how one developer created variables to create templates for users to name files
Wrapto: Wrapper for Capto for Tablo

APL Tablo has something similar, albeit limited. I don’t recall if Tablo RIpper has any flexability and I konw SurLaTablo lets you do more than you’ll ever know

Free form? Like when you’re looking at the export window you click an entry and enter a name?

And then yes, something like all of the ones you’ve mentioned.

Thought I missed something… Browsed Series & Shows Selected an episode > clicked Export thinking I might have a chance to enter a name beyond the one shown.

image716×87 10.9 KB
Just started exporting with out asking if I wanted to enter a name. Now 2 folders deep I have a single episode (of a show I occasionally record) So I missed “looking at the export window you click an entry and enter a name”

Then I checked the circle, drop-down the cart and selected Export… still no “enter a name” entry.

No “delete after export” ?

image988×105 17 KB
Not sure what it’s waiting for… There’s no delete option nor a direct path back to the show. I select View from the cart, then can Delete (selected, but don’t seem to have a method for selection)
Then it’s recursive

I’ve clicked Yes Delete, says it’s deleted… now my option is to Yes Delete (the already deleted show) or cancel confirm delete, but I did want to delete, but I already did. Clicking Yes, momentarily “Deleted 0/1” - but do I want to cancel the deletion? Then I get stressed and click the X

Ok, enough silliness. I’m missing the entry for allowing for export filename.
Some clean-up notes: After exporting then deleting, there’s still something in my cart - it’s gone! I change tablos (multi-device household) and it really should be gone from the list of shows as it’s not available on this device [period]

The “click to enter a name” comment was not meant to suggest that the functionality exists, rather to ask if that’s what you wanted or were looking for. I may add that when or right before something to let a format be specified.

“delete after export” and “go ‘home’ on device change” are on the list to be added/fixed.

OH, sorry for the misunderstanding… but yea, something like that might be nice – but then it seems most users don’t seem to have an issue with the current setup.

“delete after export” and “go ‘home’ on device change” are on the list to be added/fixed.

I do understand the more elaborate this beast gets – the more of a monster you have the get under control. Refinement follows function.

I put out v0.2.0-beta.3 yesterday and somehow forgot to mention it (though I see some grabbed it).

I’m planning on being done with 0.2.0 and publishing tonight or tomorrow without much being added.

Hopefully releases can/will go more quickly after this - I replaced a lot of the plumbing with this one.

Single [ - ] zoom-out gives me 2 more lines/episodes to scroll and still readable!! thanks!! 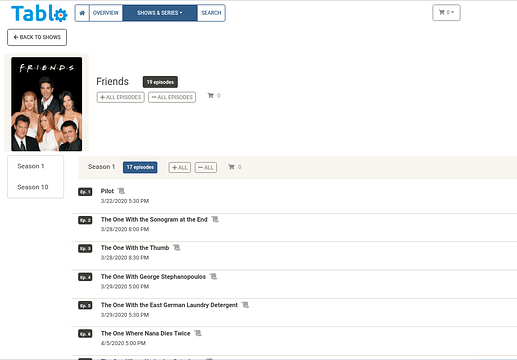 8 if I do full-screen and can quickly/easily get out. (not that I have a problem with keyboard shortcuts in general)

Okay, v0.2.0 is finally ready. Here’s everything it includes:

No Guide, just pick a Channel

Thanks Jesse - 0.2.0 is working well on Catalina 10.5.5 with exports and content viewing all working well upon initial testing. What doesn’t work for me is audio on live TV or playback of recordings within Tablo Tools. I went back to beta 2 and the audio wasn’t working in that version either. Audio on exports is fine when played back through VLC.

Do you have Surround Sound on? If so, that’s a known issue that I suppose will become more prevalent now. I’ll take another run at it.

Question: Is it expected behavior that when clicking outside an Export window and then to another page (such as Overview) the export aborts? Put another way, what is the capacity for exporting in the background?

Question: When accessing the Live TV player what happens if no tuner is available? Does it fail or kick an ongoing recording (or user watching elsewhere in the household) off?

The resizing is neat, although the truncated label text on the Overview page still doesn’t expand when space is available (as you probably know, I realize).

This continues to be amazing work and a great enhancement to Tablo.

I checked and SS was activated on the Tablo. Turning it off has allowed audio for the Live TV feature.

Question: Is it expected behavior that when clicking outside an Export window and then to another page (such as Overview) the export aborts? Put another way, what is the capacity for exporting in the background?

Yes. And no. I intended to warn folks things would stop if they left the page. Part of that is that it’s easier to (not) code. Part is certainly also that Tablos aren’t built for doing this (fast).

Which is to say, I could certainly make fully backgrounded exporting happen… at some point. Maybe. And like the exporting concurrency picker unfortunately says, yolo.

Question: When accessing the Live TV player what happens if no tuner is available? Does it fail or kick an ongoing recording (or user watching elsewhere in the household) off?

Nothing this does should interrupt anyone/thing currently watching/recording - or at least should do the same as other Tablo apps/clients. I’ll have to check/fix what exactly happens when it fails since I haven’t.

The resizing is neat, although the truncated label text on the Overview page still doesn’t expand when space is available (as you probably know, I realize).