Having a lot of buffering issues with Tablo since late June (2.2.16 update I am guessing). But I don’t record anything or need to. Just want live TV to play. Is an external hard drive necessary for this? Or should the Tablo box alone be sufficient for live TV?

I think the Tablo folks have made it work without a hard drive in one of these latest releases, but it is still highly recommended. You are limited to one live TV show with no hard drive.

With no hard drive, you’re limited to viewing live TV only, and you don’t have access to pause, rewind or fast forward features without external storage.

Considering you can get a 1TB USB 3 hard drive for under $100, why wouldn’t you add a hard drive? I’ve got a portable WD that is run entirely off the power from the USB port.

Treat it like a VCR (if you are old enough to remember using those) and even 500GB is ample space.

The folks above are correct! The Tablo will work fine with live TV without a hard drive connected. However, you’ll be limited to one tuner, and you won’t be able to pause, fast forward and rewind nearly as long.

Thanks for all the thinking folks - appreciate it. Just to be sure, I hooked up a Seagate 350 GB drive to the device last night just to see what would happen. No change – buffers just as bad when trying to watch any live TV. I’m going back and forth with their tech people to try and work it out.

No change – buffers just as bad when trying to watch any live TV. I’m going back and forth with their tech people to try and work it out.

Most of the time buffering is caused by something in the network or playback device.

Another common cause is an under powered playback device. Some of the older models and “stick” type devices are not powerful enough to handle the full sized stream from the Tablo. In this case reducing your recording resolution on the Tablo will help.

Tablo device is hard-wired to the wifi router. Not using any sticks – have an Apple TV 4 which seems to be able to handle all the other streaming services (Hulu, HBO Now et. al.) without issue. I don’t do any recording – just use (or used, rather) it to watch live TV.

Well that rules out the common causes. Have you tried streaming to a different device? If that buffered too it would rule out the Apple TV or its connection.

Not yet and I hadn’t considered that since everything else works fine on the Apple TV 4. But it’s definitely something I will try tonight. Thanks for the suggestion.

Not certain how that would affect live TV but can’t hurt to play with the settings. 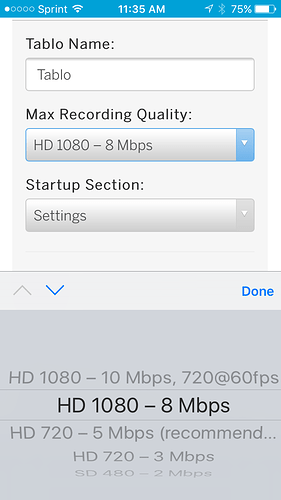 Definitely try it at a lower setting. The recording setting also adjusts the live TV transcoding and thus the transfer to your device.

If it works on the lowest setting then it confirms the issue is in the transfer speed between your router and the Apple TV.

If you search the forums for the word buffering you will find many other suggestions, I have personally typed my stories up a few times.

Even though other apps work, that is not a good comparison as they are not trying to transfer as much data as Tablo is and even if they get close, they have the ability to adjust transcoding rate on the fly.

For example, most Netflix shows transfer between 3Mbps and 5Mbps… SO right off the bat they are at or most likely below where you have the Tablo set now. BUT, Netflix can dynamically adjust that either with a longer pre-buffer and/or dropping the bandwidth. SO if its chugging along at 5 and detects your connection slows a bit, it may drop the video quality to 3 until it comes back, or drop it to 2 and pre-buffer some additional data, then bump it back up to 3, until that buffer is close to depleted which could even be after the show is over.

Tablo, can not do that, it has only a few seconds of pre-buffer to play with and if its set at 5M, its 5M, period.

Back to the causes, again, I wont type out all of them but anything from a Microwave oven or any electrical or electronic device, or a refrigerator compressor, or neighbors or even how you or other bodies move around your home, can affect radio signals, specifically, WiFi…

The readers digest version of my story was that I had to move ONE of my Rokus further away from a refrigerator. On a second one I had to force it to another WiFi Channel because Rokus own WiFi Remote was interfering with the router Wifi Signal and then my favorite was where I had to deactivate my expensive routers supposed “SMART” routing feature because it kept switching the Roku back and forth between the 2.5 and 5G signal.

I know yours is an apple TV so its not a perfect comparison, I just toss it all out there as examples of the many, very frustrating, things that can affect Wifi signals and cause the issue you are seeing.

Wow - great summary and mucho thanks for the info. I’ll try lowering the recording quality lower than the 720 and see if that makes any difference.

I did not realize the transcoding situation with regard to how the packets are processed with regard to bandwidth and signal. So, yeah – makes sense that a live broadcast wouldn’t have close to the same flexibility as a recorded one. Interesting.

The only thing the Apple TV unit is near is a stereo receiver/DVD player/CD player stack about 2 feet below it. But those units are never on when the TV is on, though I get they’re still drawing current.

Will try some things tonight and see what happens.

Just to clarify, I did mean that lowering the quality setting is just a temporary test, you SHOULD be able to get it to work at 5 once you narrow down the issues.

My last example, with the smart routing, before I found that, I couldn’t get it to work at ANY setting but I noticed as I took it down, it buffered less… I almost gave up, I was installing it in my parents old farm house with very thick solid wood walls, I actually thought it was a lost cause…

Then when I pulled up the routers throughput and connection graphs, that is when I noticed the Roku would start at 5Ghz, then bounce down to 2.5Ghz. Every time it bounced, it would buffer for 5-20 seconds + while it was connected at 2.5Ghz it would buffer every 3-5 minutes again. BUT I realized that while it was on the 5GHZ setting, even though it was fairly short lived, it did NOT buffer.

Once I forced it onto 5GHZ, i was able to use ANY quality setting, all the way up to the 10Mb…That was about 14 months ago, never a single buffer since.

Anyway, sorry for the novels, I do truly hope this gets you on the right path.

Dropping the recording quality to HD 720 – 3 Mbps seems, for the moment, to have fixed the buffering!

So simple! Yet no one at Tablo suggested this. But maybe they were looking for a wifi issue vs. data volume problem. I give them credit they did have me try a lot of stuff.

Regardless thank you for the great wifi novels. I’ll tell Tablo tech support this (THIS) fixed the issue, at least as a lower-than-5-solution. It’s still a bug in the device, but not a deal-breaker.

UPDATE: Right about 8:00 EST the buffering started again. Not nearly as bad as before the switch mentioned above, but still there every once in a while.

The setting is on SD 480 2 Mbps, but the stream is still a touch glitchy.

@DeanoNC Glad to hear things are smoothing over! We did recommend a recording quality change a while back - but it’s definitely possible this got lost in the mix. Great info from @Daniel454, too.

Yes, I do remember a quality change suggestion, but only to HD 720. Only after I put it on the lowest possible setting did I lose about 95% of the buffering. This still makes me think something is still not right in the device/network. Still, at least it’s watchable now.

Do you have any way to temporarily wire the Apple TV or another device? If you are able to go full resolution while wired it would point to something in the WiFi connection or router.

Apple TV is on first floor, wifi router is on third with a signal booster on the second floor… No way to hard wire the Apple and router together without getting an electrician.