Did something change in the last 24 hours?

For the first time ever tonight my Tablo is not recording anything. All my series records for new episodes are still set up, the guide shows they are new but nada. Everything was working fine last night

Both Balcklist and H50 should be recording now but aren’t. I’ve already rebooted to no avail.

You need to remove and re-add the scheduled shows after you refresh your subscription under settings. If you use remote connect on your Tablo to watch shows when you aren’t home you must also check that box again. This appears to be due to a server update on March 7th.

As a result of yesterday’s maintenance period, we’ve received a few reports of Tablo devices not recognizing their subscription.

We’ve confirmed this does not affect all Tablo devices - so far the reports have been very limited, but our customers tell us that their Guide screens (Primetime, TV Shows, Movies, Sports) are no longer accessible, Tablo Connect is not responding, and the previously scheduled airings have disappeared from their ‘Scheduled’ screen.

The good news is that most of the affected Tablo devices should already be fixed since they would have automatically checked in with our servers overnight and should have refreshed the subscription status, solving the issue.

If for some reason yours has not checked in already, the process below will get you up and running immediately: 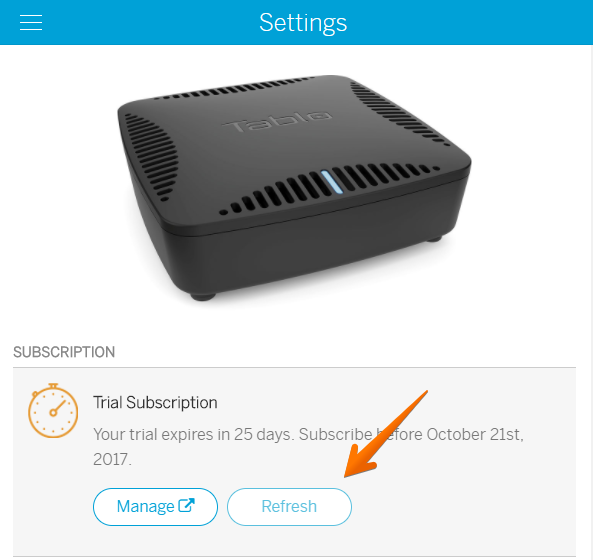 Your scheduled shows should also reappear (this may take several minutes) - if they do not, please send our team a ticket (https://bit.ly/TabloTVHelp ) and we’ll check it out.

My subscription shows as active, but even before I saw this response I redid all my series records…and did maintenance on the shows no longer on the air and recordings and all future recordings have resumed/shown up where they need to

And thank you for the quick response!

You can also go to SCHEDULES and then “flip” Record New to Record All, and then back again. It will take a few seconds to update on each “flip” as it updates your database. Also, after about 8 or so flips, the system will get sluggish, as it will initiate a re-sych.

Wait for it to finish (DO NOT RESET TABLO) and exit back to LIVE or RECORDINGS, then back to SCHEDULED and continue the process.

This process is easiest to do on a PC connected to the Tablo. It took about 20 minutes to reset the flags on 80 scheduled recordings.

This happened to several of us as well. In my case, I submitted a support ticket and the support folks were able to fix it within several hours for me. Much easier than having to unschedule/reschedule all my recordings.

I submitted a support ticket and the support folks were able to fix it within several hours for me.

They told me I had to do it myself. I believe the support team is home for the weekend now so anyone waiting on them will probably want to fix any upcoming shows themselves.

My Tablo 4-channel has a habit of rebooting 3-4 times in rapid succession about twice a month during prime time. When it did this a few nights ago, all recording stopped and no recordings took place afterwards. When I discovered there was a problem the next day, I rebooted the Tablo several times as well as the router and Roku Stick. No result. I scheduled a new program to record and it worked, so I went to each existing scheduled program and changed the default channel to the specific channel and this seemed to correct the recording problem. That was a very time-consuming fix, and I don’t think the channel was the error, but apparently making any change caused the Tablo to refresh. I still don’t know why it randomly reboots though. When I see that pattern occurring, I sometimes reboot the cable modem, router, and Roku Stick while waiting for the Tablo to stabilize. Don’t know if that has any impact, but it can’t hurt. I love the Tablo, but it can be frustrating at times.

I went to each existing scheduled program and changed the default channel to the specific channel and this seemed to correct the recording problem.

My Tablo used to do something similar. The reason it did it was because of unintentional radio interference. A signal would cause the channels to drop out and that would cause my Tablo to reboot. In my case I was able to identify and reduce the interference. In your case you might have just avoided interference by changing the channel. Of course this is only a guess based on my personal experience. It would take a radio site survey or something similar to confirm it.

I have the same problem. I hit the REFRESH button yesterday afternoon but still nothing. My local news did not record last night. I tried to check what was scheduled but all of my shows have disappeared from the scheduled screen. Please help!

Please tell me how to submit a support request. I don’t want to have to redo all of my scheduled programs but right now it shows NO RECORDING scheduled. Thanks for any help

I’m having the same problem, though I thought it was connected to signing up for a lifetime subscription. It’s no longer showing my year long subscription, which doesn’t expire until 3/18, nor does it show my lifetime one. But they sure took my $149. I’ve submitted a request here: https://www.tablotv.com/ask-tablo/ via email, but I’m sure they’re all home for the weekend. Regretting my purchase, particularly with the lack of customer support on the weekend.

At the very top of the Settings page click Refresh in the Guide Data section. That should refresh and display your subscription. I think that part has worked for most everyone. However, you need to go into Scheduled in the All view and for any series you have set to record you need to “toggle” them to get stuff to record. In my case I have all series records set to New so I selected All and then New again and the upoming new episodes then showed as scheduled. Annoying but a valid workaround.

Thanks for the suggestion. I’ve tried this on my fire stick, on my phone app, and the web app at least 20 times. Also, all of my scheduled programs are just gone. Under my account, where subscriptions should show up, it’s blank. I’m thinking it’s a bug on the accounting side of things. It shouldn’t cancel my year subscription when I purchase a different subscription. Looks like it’s taken away all of my subscription capabilities.

Sorry it’s not working for you, sounds like it’s a little different issue in your situation.

They told me I had to do it myself

Ultimately the most efficient route for many I suppose, my method. Just that the whole issue seems to be related to their “system maintenance” a few days back, considering it’s not an isolated incident.

So why is it an user issue -fix it yourself, sorry we caused it… but we aren’t going to do anything about- it seems kind of flubbed up.

Just went through the process of changing all recordings from Record New to Record All and then back to Record New.
25 minutes of my life I will never get back.
Maybe I will slowly reclaim the 25 minutes that were lost by the automatic commercial skipping when it is introduced.

Twenty-five minutes. Your lucky at least your efforts would result in something positive.

I just spent 3 hours on a mandatory visit to the DMV sitting amount all the other slugs.