My story. I HAVE NO CONNECTION TO CHANNELMASTER.

I live in a 3rd floor apartment five miles from the center of Boston. Six to eight major TV towers (all networks and PBS) are about 3 to 4 miles from the building. I live on the other side of the building from the towers. There are large shade trees in the courtyard outside my window. I have a 4 tuner Tablo which I’ve been using for about 2 years. I started out using indoor antenna(s) placed on or in close proximity to a window facing the courtyard. Eventually I rigged a ‘small’ outdoor antenna (not permanently secured) to the window casing. Pixelation was constant on all five-bar, green channels. Recordings mostly failed because of the signal loss.

During all that time, my reception improved marginally through all the antenna placements, firmware updates, app (Apple TV 4) development, assorted attached power boosters and all manner of seasonal weather conditions.

A week ago I read the thread below-

If I get the Channel Master LTE filter though then I won't need such a coupler right? I can screw it directly into the preamp. https://www.amazon.com/gp/aw/d/B01JGSC5AO/

In it, one of the posters mentioned a Channel Master LTE filter- 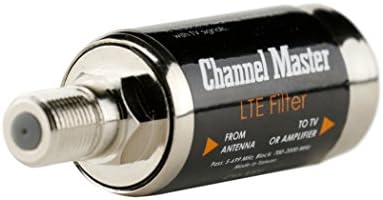 Improves over the air signals by filtering out mobile LTE signal interference (3G and 4G) which can cause intermittent TV signal disruption including weak signals. Pixilation or channel loss.

What did I have to lose. Bought one. Installed it to the end of the coax cable and attached directly to the Tablo. Less than a minute from opening the shipping package.

The weather was raining hard with high winds. Perfect conditions for maximum pixelation.

Without rescanning, the results were AMAZING!!! Absolutely NO pixelation. I waited. None. I changed channels to the most problematic. Again, no pixelation. Shut down the system.

Came back hours later with the same weather conditions. Same result; No pixelation. Set up some manual recording for over night testing. In the morning, all recordings worked perfectly.

I’m going to try one. I choose the cheap route. I saw one selling on eBay for $6.25 shipping from England, and the guy sold quite a few, so I bought two, one for each of my Tablos.

Not sure if LTE interference is my occasional pixelation problem, so I didn’t want to spring for the $25 Channel Master.

I’ll find out when they get here.

What is the frequency filter of the cheap one? It may not filter out the most important frequencies.

I don’t even think I looked.

It’s been a week since I installed the ChannelMaster LTE filter. Before installing it, all 4 PBS channels throughout the day if I would run a scan would either not show up, display red, or orange. After several antenna adjustments decided those channels were mot ever going to be stable and I left it unchecked. Now that the filter is installed PBS comes in green or orange at times. But even on orange there are no issues. I would get pixelation at times on other channels that were green before the filter. That too has went away.

I’ve had this set up for a little over 6 months. Was happy with it before. Now this is icing on the cake.

I’ll have to look into this. One of my major broadcast stations on a rare random sunny day will be totally broken up, and pbs is also on the fringe of reception strength, this would probably help with those 2 issues. $25 seems a bit much… will have to see if there is a chinese knockoff.

We have two cell towers .5 mile away they are at 45deg to the left and right of our house.
took all pixalization away and what where 3 orange bars became green. 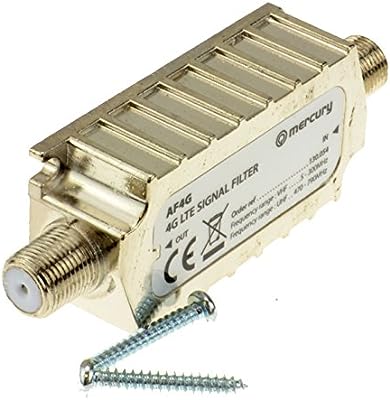 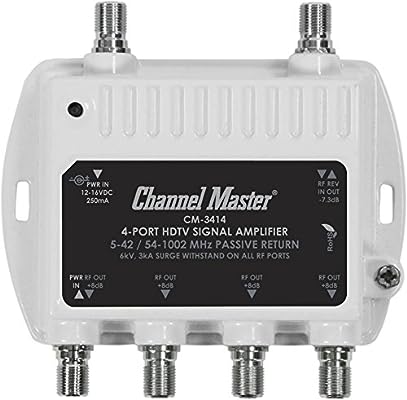 This little buty works great, i installed it …roof antenna=…40ft run to cm3414 4 port dist amp in attic feeding 4 rooms…spare room has Tablo…another 30ft run from attic to spare room…dedicated coax for Tablo…so feed comes in rm and the LTE filter is installed …antenna feed into the …IN…then …OUT is connected to tablo coax with an inline 1 foot coax extention.

I think I am going to try the cheaper one. I am 7 miles from the towers and 2 of the channels don’t ome in plus cell towers all over the place.

Just ordered on one Channelmaster’s site for $14.44 and free shipping. Figured I’d give one a try to fix the occasional pixelation I’m seeing on a few channels.

Just ordered on one Channelmaster’s site for $14.44 and free shipping. Figured I’d give one a try to fix the occasional pixelation I’m seeing on a few channels.

Thanks for posting this…I just bought one as well. Good sale, no tax, free shipping. Been wanting to get this for a while, but the price put me off. $14.44 was just too good to pass!
Here it is if anyone else is interested:

I thought I was the only one that’s cheap.

Just ordered on one Channelmaster’s site for $14.44 and free shipping.

Already have the cheaper Kenable competitor unit, but it didn’t seem to do anything for my system.
Another drawback of the Kenable unit is you need a coax male to male adapter to connect it to the Tablo.
Couldn’t tell from the description, nor the photos that both ends are female.
Even if the Channel Master unit does nothing for me, at least it’s at a discount.

Thanks for the heads up, Leaning6.

I ordered one yesterday and the deal still holds (discount, no sales tax, free shipping).

Added one to my system in the hopes that it fixes the random pixilation I get from time to time. If nothing else it will be a nice placebo

I ordered both of them listed above. They both seem to work well. I wish I would have gotten in on the channel master deal.

Thanks for the heads up. Just ordered one as well.

One of the reasons I went with a Antop 400bv antenna, it has the lte filter built into it.

Do you have a link to said antenna?

Yes, I ordered the $14 Channel Master LTE Filter and put in on yesterday and it changed all my yellow dots on 4 or 5 channels to green and I think the picture is better also. Good Buy