I have a Tablo running via Ethernet on our network. All other devices run just fine. However, the Xbox (which is also connected via Ethernet) doesn’t seem to “like” the Tablo app at all. I think there are lots of bugs.

For one, when the controller goes to sleep, the Tablo pauses/freezes.

Then randomly, the image will freeze. My guess is every time the signal gets slightly degraded, the picture just stops. You have to back out and select the channel again. After, it will work for about 5 to 10 minutes and then do it again.

Lastly, the app simply will crash after a certain amount of time. Really annoying.

Anyone else having Xbox issues?

I have the issue on all of my xbox ones in the house. It is really annoying. I consider returning the device over it but now I am at the mercy of the developers to fix the issue. I have 2 main issues. App Closing completely and Live channels pausing. All devices on a gigabit network. I have tried turning off notifications on the xbox, tried adjusting multiple settings in tablo. If it happens often the best solution I can provide is hold the xbox power button down for 20 secs to do a full restart. Hope a solution is found soon.

I’m in the exact same boat. I have to exit the app and relaunch to get Tablo running again.

Does anyone with the issue find it happens more when a show starts recording or when the rewind capabilities gets to be over an hour on a a channel? Also the pauses looks like they are happening to due buffer running out. If that happens on the pc is will spin a second and resume but the xbox will just permanently pause it. From the tablo to the xbox it is gibabit Ethernet. I can stream simultaneous 4k streams from the internet. Also, my house was hit by lighting a year ago. So all my switches / routers are fairly new.

As a sidenote I started converting her shows to plex using mcebuddy and tablo ripper. I have it do the conversion on offpeak times from 1am to 11am. Ironically the ripper states is pulling data from the tablo at 8x rate. After a initial setup I haven’t had to do anything for over a week now. Plex is rock solid on the xbox one and mcebuddy gets rid of the commercials.

Ultimately I hope the tablo team is watching this thread because I want a fix for this problem. It’s a great product but hard to recommend it when you have the constant freezing / crashing.

@ehcropydoc Sorry for the delay. We’ve been working on a few other things! We hope to revisit the Xbox app soon. To clarify on a few things:

Can you confirm the controller sleep issue? We’ve tried to reproduce this here, but we have no issues (on a few units) when the Xbox controller goes to sleep
I don’t think this is the issue. It just so happens that when I leave the Tablo running by the time I get back to the room the controller has gone to sleep along with the issues showing on the screen.

Do the pauses/freezes happen on a particular channel on your end? Is there pixelation when the image freezes?
I have 4 OTA channels that all work the same on all other devices. No issues. They also all fail the same on the Xbox.
I dont see any pixellation at all when it freezes. Only a scrolling wheel and a frozen picture of last frame on TV.

Have you noticed if it takes a certain amount of time for the app to crash? We’ve yet to reproduce this one
It seems to be random. I just did another test and it took 6 minutes. Heres the weird part: when it freezes I see the progress bar at the bottom of the screen and it shows the time it froze and then it seems to show the time it currently is. I am going to post a photo shortly. 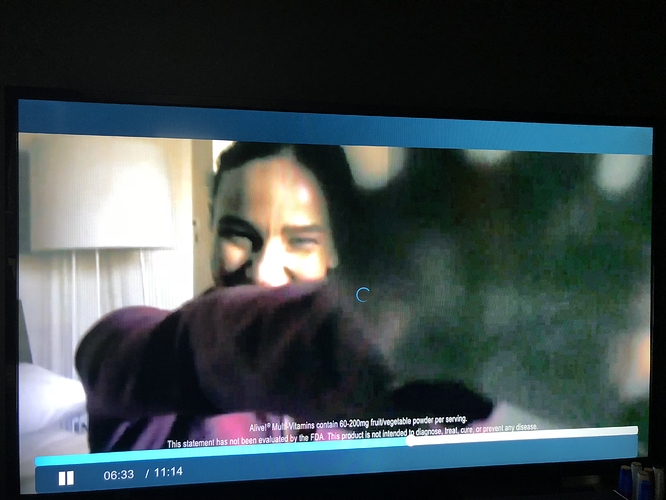 Mine looks exactly the same as well. After fighting this issue a few months I realize that it happens more if I record another show at the same time. It always happens at the 3 hour mark. If you watch the buffer you will see it pauses because the buffer has run out. It pauses to loads more but it never comes out of the pause until you take action. I used to just fast forward and continue watching but that seems to make it more prone to occur again. So now I leave/join the channel. It seems to reset the channels buffer to an hour as well after I do that.

The app shutting down seems to happen when the tablo device spontaneously reboots. I pretty much resolved that issue by only allowing full signal channels on my list. Watching channel that breaks up seems to cause tablo to reboot often.

FYI. Just got firmware 2.2.18. Video paused in the first 20 mins. I was hoping it would help but no such luck. Since my last post I replaced the switch and tried a different router hoping to resolve the issue. I find it hard to believe that tablo is unable to reproduce this issue as I can repro on multiple xbox’s in the house and so can others. Honestly, I would just rather tablo admit there is a problem and they can’t fix it so I can give up working on it.

Do you have the IP address for the XBox reserved in your router settings? Perhaps your XBox and your Tablo are “fighting” for the same IP address.

I reserved an ip address on my tablo a while back and it did not hurt/help. After having the new firmware the experience is much worse. They mentioned a xbox one app update soon. That is probably my last hope. I am getting so much grief from the family for switching to this.

Since the update I have a new issue as well. Playback will just randomly skip back 30 secs. It will do that a few times and then pause. I really wish Tablo would comment and offer some hope for us.

the xbox one freezes all the time playing videos. When pausing live tv it quits tablo after pry 20 minutes, losing whatever you were watching on live tv. It’s quite discouraging to even watch tv, on more than one occasion I’ve just shut off the app and listened to music.

I opened a ticket with Tablo support a few days ago, and referenced this thread. My specific issues (see by some here) are with live TV:

Got a reply today saying they are trying to reproduce the issues on their end.

the looping is a new feature with 2.2.18 for me. Internet streaming tv (Hulu) finally got all the local channel except CBS. So far so good. I fell asleep with it on and woke up and TV was still playing… wow

I have this same issue. The channel doesn’t matter, the bitrate doesn’t matter. It happens on every type of Xbox One: S, Original and X.

Wired or wireless makes no difference. I also use Rokus and Amazon Firesticks… they work flawlessly.

The channel simply pauses, (as if buffering) and the only way to get it going again is by pressing the “B” button on the Xbox controller to back out to the guide, then the “A” button to restart.

Another data point: this never seems to happen while playing back recordings… but I don’t watch a lot of recordings, so I can’t be sure.

Here is a video showing what happens:

@TabloSupport thank you for any updates. This seems to have been a problem for awhile now.