What's a good sound system to go with a vizio tv?

My place is not very big so I don’t need something to blow the walls off. Plus I’m not very technical so I need something easy to set up and work with. I’ve got a really nice setup now with an xbox one to play movies, discs & vudu movies and a fire stick for everything else. I need it to work with vizio brand tv but don’t want the kind with separate speakers on the side. Any good ideas? Here’s my tv it needs to work with.

So I’ve been getting some really great help & ideas from here & I trust the advice I get. Thanks.

Are you looking for a soundbar? I’m not sure you are ruling them out when you say you do not want the kind with separate speakers on the side. I looked up pictures of your TV and it looks like it has an optical output so almost any soundbar should be compatible but here is a link to the Vizio soundbar collection:
https://www.vizio.com/sound-bars

Yeah sound bar so I don’t have to plug in extra speakers or anything. Doesn’t have to be vizio brand as long as it works with a vizio tv set.

Not familiar with simple sound bar but this one looks good with decent price if not happy just return it.

Had a buddy has Sony sound bar and it sounds good

I’m looking for one that I don’t have to connect speakers to. A one piece. That way it’ll take up less space & be easier to set up and use.

Here’s a “one piece” from ZVOX audio, they make excellent products. Very small and great sound.

They also make a Soundbase, also a one piece, this one you can put on your stand and put the TV on top of it. Has more speakers built in, better bass, etc. and same price. 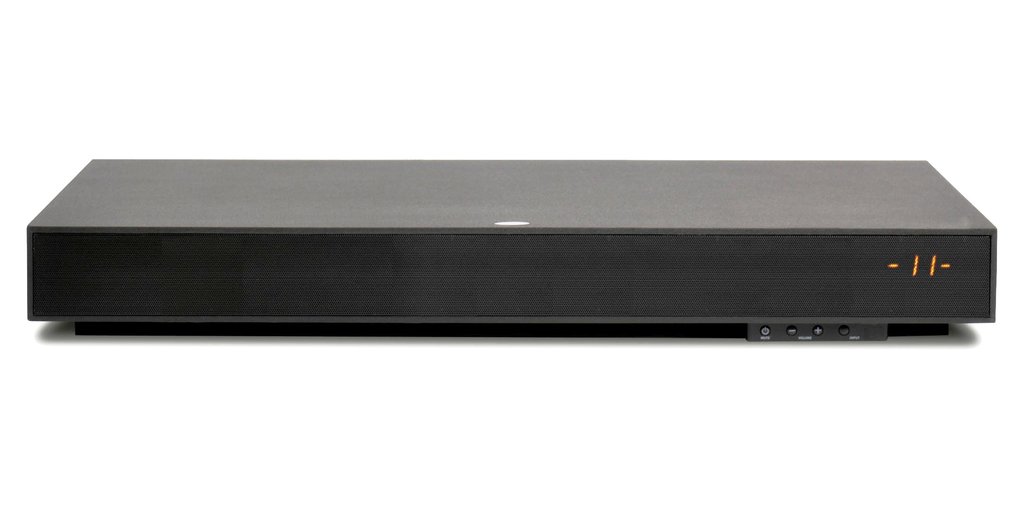 Works well with TVs up to 40" in size (TV pedestal/feet should be 23" wide or less). High quality room-filling 3D sound from one slim cabinet - no external speakers or speaker wires. AccuVoice feature uses hearing aid technology for super-clear...

And there’s the Bose Solo 5, the one you see at Sam’s Club, Costco, Amazon and everywhere else. All three of these are in the same price point:

For half that money, you can get something that will be an improvement over your TV’s built in sound. When dealing with the “cheapies”, steer clear of brands such as ihome, etc. Here are a few examples, one is from LG, the other is Insignia, BestBuy’s house brand. Both are respectable:

That LG sound system looks pretty good & it’s about the price area that I need to be. I could go maybe $150 something like that. My needs are pretty simple & space limited.

If you keep an eye out for Costco sales, they have some really good sales on sound bars - sometimes under $100.

You’re right they’ve got a really nice yamaha one piece with subwoofers built in, so they say the bass is good. It’s $150. And they have a bose one for $179 that looks really compact. I’m going over there today and test them out.

What did you decide on?

I bought the “club” version of the Yamaha YAS-108 at costco, which is the ATS-1080. Great bar, with HDMI input. It will accept an external wired sub, but does not come with one.

The other great choice, which was at one time available at Costco, is Vizio’s own SB3621N-E8, which comes with a wireless sub. It doesn’t have HDMI, and it can’t handle DTS input (it has it’s own DTS sound processing of 2.0 sources for output), but works well with optical or digital coax for Dolby Digital sources. I bought that bar for $120 a year or so back- but after the TV it was connected to went to plasma screen heaven, I returned it for full credit. A year later, I bought the Yamaha for about $!50.

Those are good recommendations. The costco yamaha is only $139 right now. I listened to one this morning and it sounds great. Right now that & the bose are what I’m probably going for. There’s a guy from work who’s going to show me some at best buy later.

Heard the yamaha & bose solo at Costco today, looking at a few more at Best Buy later. So far everything sounds great.

You were right costco was the way to go. Really good choices & best prices. Thanks.

I got the yamaha you recommended it sounds great! It was on sale for $139 I couldn’t believe it. The surround sound is amazing for movies. And it sounds really great for music it was easy to set up with my tablet to send pandora to it and I’m loving it!!! If I move to a bigger place I’ll shop for a subwoofer to go with it. None of the other inexpensive sound bars could do that (bose, etc.). Thanks!

Congrats! and enjoy it. The bar provides some good options. For dolby digital sources, I tend to leave it in “surround” mode. If I’m watching a blu-ray disk with a DTS encoded soundtrack, I find that the “3D surround” mode is a better choice. Your mileage, of course will vary. Best of luck with it!

(offtopic sort of) I had a 7-1 Yamaha surround system once and we had a lightning strike (doesn’t cause a surge, causes a temporal loss of ground). And the only thing we lost was the Yamaha system. It was sad.

I’ve been built-in two-channel ever since that day…

This one is called a 2.1 system I think. There’s a plug in on the back for a separate subwoofer but I think this sounds great with just the subwoofers built in. Didn’t know yamaha made sound systems for tv & movies until now.

I’ll stick with that choice for movies. But I gotta tell you the music on this thing is grrrreat too.