What are the known causes that break pairing?

Throwing down for @TabloSupport … there are a lot of user comments about what anecdotally appears to sometimes break pairing for some people, but I’ve not seen an actual response from Tablo declaring what the known circumstances are that will break pairing. If we could know that, then we would be better able to manage our remote viewing hopes.

According to the KB article in Chapter 6 http://support.tablotv.com/hc/en-us/articles/202200368-Chapter-6-Connecting-to-Tablo-Away-from-Home it says a device “…must have been physically connected to your home network at some time.” But there is no mention of what breaks pairing, and I guarantee you my 2 laptops, 2 tablets, and 2 phones were all connected “at some time”, but now that we are at the kid’s house for the week, none of them will connect.

An alternate means of re-pairing or using an ID / Password to access is only half of the story. We really need to know what breaks pairing so we can manage expectations.

If it is, as sometimes suggested, every time the public IP address changes, then most residential consumers should have NO EXPECTATION of remove viewing since our cable / dsl internet providers can change that address any time, any day.

So how about it, @TabloTV - what breaks pairing - officially?

Hopefully this adds some context for you.

I noticed in the past that with my router, using the UPnP functionality for the port mapping would break pairing every now on. Once I changed to using explicit port mapping settings it’s worked flawlessly.

Seems odd then that I cannot access remotely as I validated that my ISP had not (at least as of Sunday of this week) changed my IP (I use noip.com so I can tell when it changes). And nobody was home to reset the router…

Oh, well - can’t wait until I get home to see what the “real story” is, and can’t wait for the dynamic IP change fix to make it to the free world…

I have a guess that I’m either going to be on 2.2.8 (even though it was not being offered to my device before I left) or some hang-up with the “upgrade now” option. And yes, I know it’s not supposed to happen without my approval, but 2.2.6 did. Started seeing the FF preview and one day, and went and checked, and I was on 2.2.6, and no, only me and the wife in the house, and she won’t even approve updating her antivirus without checking with me

and I confirmed, she did not upgrade it…

If that’s the reason why is my iPad/laptop still paired with remote Tablo but my iPhone lost pairing several days ago?

In the interest of full disclosure I would like to see some of the advertisement “feature” descriptions rewritten so that it doesn’t sound like you only need to “pair” locally once and you’re good to go.

When it frequently loses pairing for no good reason, all that flowery advertisement language comes off as offensive BS to this customer/user.

Since it is getting close to “that time of year”, let me be the first to say “Bah Humbug”!

let me be the first to say “Bah Humbug”!

Maybe a short one.

Isn’t pairing also broken, if…1. You manually disconnect, and then click on the red X?2. If using a web browser to connect, clearing its cache?

Yes - that is also correct.

So thanks - but no, there is no help there. ISP had not changed external IP when it broke, router has not been reset or port forwarding rules removed, and for at least one device (cell phone on cellular network) did not have any firewall that is different. So it just broke…

@mohoelx - We do have an existing issue w/ Tablo Connect on Android devices. We’ll be pushing a fix for this in the next few days.

I’m noticing this with my fire tv. Will I need to repair?

Sometimes updating the firmware on the Tablo itself, depending on how major of a change. For example the upgrade that enabled larger disk caused mine to become unpaired.

As noted in another thread - wife paired here (east coast) week of Christmas. She returns to the west coast and now this: 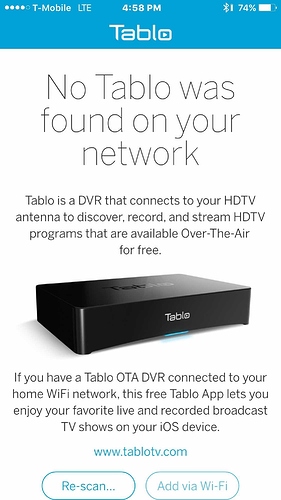