I have been roku for about 12 yrs. It’s awesome. My tech friend and I met in 2010. He sold me on roku. We then decided to go to simple.tv. It was worthless, we found out about tablo.

How would you all explain to people? People here in Philadelphia are the type that they want the downloads and stuff. I used to get asked if roku was legit and now I don’t hear that. What do you all think is the trick?

Just my opinion. If they have money to burn, you’re unlikely to sway them to make “a change”.

If they are unhappy about how much they are paying… then you will probably have their ear. No guarantees though. Usually becomes easier if people are willing to compromise to save money.

the responses I used to get is either they have Comcast or they have verizon. The Comcast ones it’s ridiculous and it’s truly sad that they don’t see an alternative. They want Comcast sports net they want the Philly teams. you get the point. If I tell them what I did and my mom finally did I wonder if that would work. Most people I see are giving excuses. Let me see what I can do.

Oh some people they have fire stick and able to access everything free and i tell them that is a no no. you mentioned interesting. I will say you burned money.

Yup… usually money. Tell them a new depression is coming!
Kidding… sort of.

Some are motivated by being able to record live sporting events.

love the response. I will see what works.

It’s kind of - if you have to explain it… they won’t understand it.

Really, over-the-air broadcast has been a widely know “thing” since the 50’s. Somehow people “discover” OTA and it’s new. You want to explain antenna and television?

gotcha. My friend did say the old rabbit ears. antenna and tv gotcha. Most people are hearing about roku , apple, amazon. I want to see what their bill looks like, see if they’re paying the extra amounts and see if I can get them to cut down.

On my car, I posted $60 a yr, antenna tv live local broadcasting. People are going to look and see if they can catch on what I am trying to do.

Sort of. Current young adults have no idea of life before cell phones, computers, Internet, etc. Shoot, many “discovered” vinyl and now “it’s hip”. I saw someone the other day turn an old rotary phone dialer into a mobile phone. Retro is cool, but there’s a lot of “retro” yet “undiscovered” by current adults.

OTA is as old as much of that. And it’s retro cool!

On the discussion , you all have the same idea my tech friend has. Shall see if it works. Love when I have the source where I can get the items at and people would rather else where. So my answer will be you have to get the equipment from such and such or I charge more. appreciate the responses.

Along with “current young adult” I’d toss in the “American way”… don’t think, just follow and do what they say. Marketing (corporations) and media have taken over decision making.

Yet dated terms and icons are accepted. How often “are you taping this?” as though a cell phone has video tape in it? “Taping this” has come to mean recording a video to a generation who’s never touched a video tape.

without question is accepted as video. A desktop rotary phone icon

is easily recognized as a phone today, while it’s been decades since it’s been seriously used. A square with two sticks

is an obvious television.

They know the symbols… but don’t know what they are?

So my answer will be you have to get the equipment from such and such or I charge more.

Depending on your location, start with an inexpensive antenna. Understand, there really is no such thing as an “HD” antenna. A TV antenna is a TV antenna - it’s an antenna It doesn’t need to be fancy, just adequate and properly adjusted!

I have this from ~30 years ago, when HD may have meant heavy duty, I’m over 50 miles away from transmission towers. So if a low cost can get a few channels… prove things can work. Move on to a decent antenna if things work. 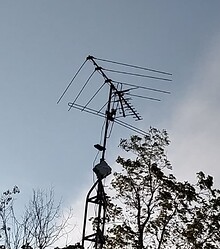 They know they are “old”, and “boomer” and therefore “anathema”.

Like asking someone born before 1970, “When are you upgrading to a ‘horse and buggy’?”

truly sad that people don’t see through. I hate youtube because too much censor ship.

I guess they don’t read reviews. The reviews are horrible for youtube tv, no customer service, lacking of different things. I would say , well good luck with what you have if you desire, there are alternatives with better options.

well fortunately if anyone is trying to get rid of dish and directv, I have to read about the weather and especially rain. Lightning strikes. If anyone can find an article about that and the lightning strike let me know. I can find out from manufacturers, because I can beat out any tech that doesn’t know what their doing.

Video content comes with a price. It isn’t “evil companies” out there trying to rip off people. Each channel has a cost to the cable company or streaming company. They have a small markup (usually 5-10%). The main difference in streaming vs. cable is in streaming - you own the boxes (i.e. Roku, FireTV, etc) vs. renting a cable box.

I gave up cable years ago, and went virtually 100% over the air with Tablo. I don’t subscribe to any live TV services - I change subscriptions between Hulu, Paramount Plus and a couple of others to binge watch shows that I miss. The only thing that stinks is live sporting events. And I won’t pay the price to watch those events at home.

I will be honest. I really don’t like sports because I can see through it and decode what teams will win it. I agree with you about everything else mentioned. But the biggest question is this. What is a cable box? I am going to get the $179 lifetime before this month is over with. Tablo support rocks. If I can find out the two options tablo does then I can let people know. Owning the boxes isn’t the problem. The problem here in Philadelphia was people were downloading illegal stuff that they shouldn’t have but I may have the way to explore the options to people. With in this house I live in, I keep telling my mom, she would have been paying $2400- $3000 for the yr. Look at what was saved. And to her she doesn’t quite get it. Our verizon bill is about $125 per month, I can write it off on my taxes because I obviously use internet for business expense.

youtube is a ripoff and agreed cost as much as cable