I would like to request the following, if doable for when you are watching Live TV or a recording and press the ‘OK’ button.

On the Roku when you’re watching live TV, hit the down button. You’ll see the overlay guide and what’s playing. It also shows you the time. 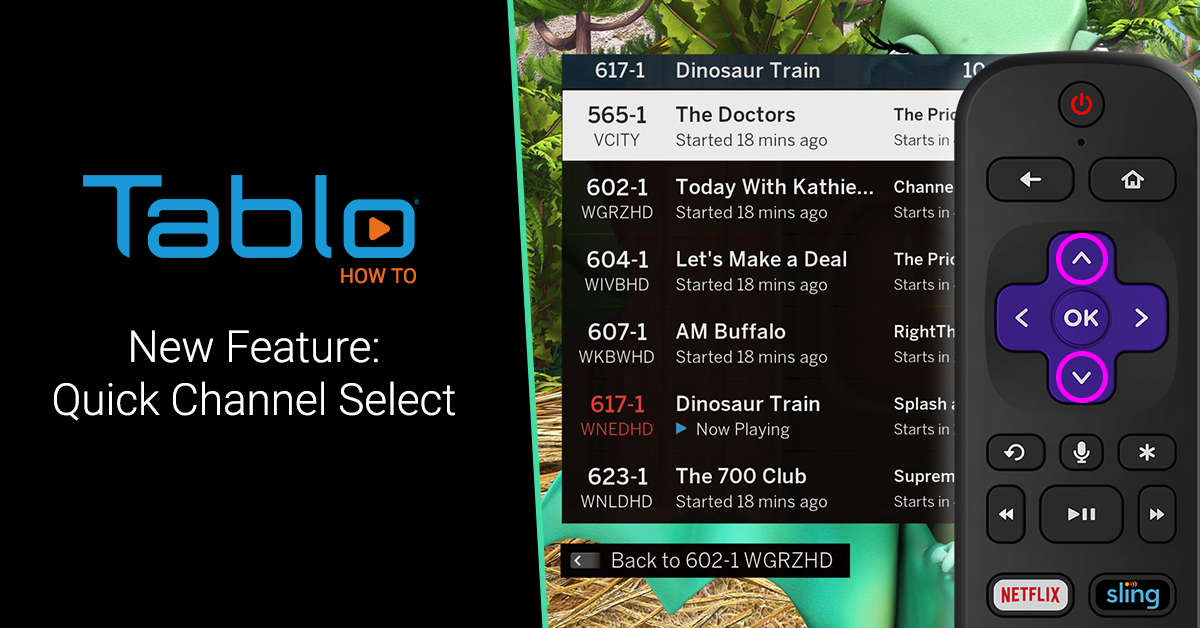 Thank you but I know about that.

Doesn’t it basically do what you want? Except you have to hit the down button instead of OK button lol

Yes, they are similar but when pressing the ‘OK’ button you are obtaining information for the current broadcast you are watching at the time and it is less intrusive than with the overlay guide…

I agree with that. And the down button does only work with live TV, not recordings.

And the down button does only work with live TV, not recordings.

@TabloTV Any chance of you guys adding a “private channel”/app, so those of us with multiple units can set each app to connect to a specific unit and not have to disconnect within the app to switch which Tablo we’re accessing?

I have multiple tablo units but assign different types of recordings to the various units. If I want to switch from TV shows to Sports I have to find the Sports app device?

@zippy Good question. I’m not suggesting anything be removed. I’m simply suggesting an alternative be added for people to switch between Tablo units. It would allow people to watch recordings (or live TV, for those who use separate antennas) on the one they want with fewer button clicks.

On my main TV I have a Roku, Fire TV Stick, and a Nvidia Shield. I have 3 tablos. Couldn’t I leave each one in the tablo app connected to a different tablo unit and have the desired affect? I only have to switch HDMI inputs.

Not everyone has multiple Tablo compatible streaming media players connected to (or built into) any of their TVs (especially of the always-on variety), let alone all TV’s that get used regularly. Besides, it’s less convenient to have to switch source/input on the TV than to just switch an app, and thus many would consider it worse than just disconnecting within the app.

Besides, it’s less convenient to have to switch source/input on the TV than to just switch an app

I completely agree with not everyone having multiple devices, but switching inputs/apps - press this button or that button – really substantial difference (if you had different devices)? change input/device basically changing apps… on a different device

That would be too complex, if multiple tablos include duals, hopefully a single 4 tuner will be enough to keep things simple.

It would be nice if Tablos could be aware of other Tablos on the network. And then either…
A.) sync the list of recordings so when you view recordings you view all of them regardless of which Tablo it’s on …
OR…
In the banner at the top or in the fly-out menu on the left, have a selection called Devices if … somewhere in Settings… you have noted that you have multiple Tablos.

It would be nice as a tablo “what-ever” device enhancement.

Hmm. Very good point. Do they allow someone to beta test just that one particular app? I especially would prefer not to beta test the firmware.

Quite. In fact it needs the TV remote (or a universal remote) and the remote for the other streaming media player.