Dust can be a problem for some, fortunately where I keep this device tends to be fairly low dust. i.e Low foot traffic, no pets in that area and no outside doors. Anyone who is going to do this type of mod would probably be able to handle cleaning it out every 6 months or so depending on conditions. I guess I could always 3D print a new case for the thing putting a fan in a better location. Bit overkill at that point.

I guess I could always 3D print a new case for the thing putting a fan in a better location. Bit overkill at that point.

For most, maybe… I bet you’ve seriously considered it

. I’m surrounded by [crop] fields and woods. Dust buildup is constant, spring planting, harvest is horrible, then autumn - just wondering, since you were starting to force air into it.

I’d seasonally vacuum computer cases and blow out TVs and other electronics… but in the end, that just blew the dust around to land else where. :sigh:

I live in Phoenix, we get dust storms literally a mile high that cover the entire city. So yes I understand dust. Fortunately where I keep the Tablo has very little dust. This house is pretty well sealed and I have air cleaners everywhere for that human and pet related dust.

Thanks so much for posting the pics, nice work! I know my limitations and would not attempt this, but - I do hope Nuvyyo will take a close look.

probably why there’s just an empty “space” for a fan.

If you look on the right of the board it appears they left traces for the fan header as well, labeled + and -

Thanks so much for posting the pics, nice work! I know my limitations and would not attempt this, but - I do hope Nuvyyo will take a close look.

The heat the Quad itself produces and the passive cooling solution they engineered is just fine for the Quad itself. I’ll be that person however that feels a hard drive shouldn’t be too hot to touch. Now it’s sitting at a reasonable temp closer to what a well engineered laptop would run it. Last time I pulled the drive out to take these pics it was just warm to the touch.

If you look on the right of the board it appears they left traces for the fan header as well, labeled + and -

I just be you measured the voltage, found a header/socket and soldered one in place. You know you need to release more than just pics. Once someone mods the case, installs a fan… they are going to need to know how to power it!!

I just be you measured the voltage, found a header/socket and soldered one in place

Nope, just connected right to the bottom of the board where the DC jack connector is. Anyone who knows how to solder properly would find it really simple. 220 ohm resistor in heat shrink tubing connected to the 12 volt (center pin) side under the board and black connected to ground.

Honestly I would rather people just run external drives and keep the warranty. I’m very happy with the results I’ve got and it’s clean, neat and barely audible.

Is the 40x40x10mm fan completely exposed on the bottom?

Yes, I learned long ago not to stick my fingers in running fans. I could add one of the metal finger guards or even just plastic. Easy enough to add.

Were you able to just wedge the fan into the hollow space or did you have to do any cutting? I’m thinking I could connect the fan to a USB cable and use something like this to control speed. 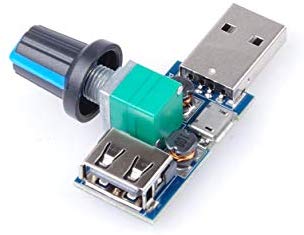 I just chopped out the square area, the fan then fits snuggle in place. I hit the corners with a file. Honestly it only took a couple minutes. What’s really funny is I was just looking at fan controllers. I could roll my own…but why bother.

I find these threads strange because Nuvyyo has repeatedly said there is zero thermal problems with these devices. Zero.

I agree, the Tablo doesn’t have any problems with heat at all. Toss in a hard drive in the Quad and it makes me highly uncomfortable. In the end if you happy with what they said and trust that a problem doesn’t exist then just ignore any conversations related to heat and enjoy your device.

Better yet find me a study that shows long term hard drive life expectancy at 60C. I couldn’t find one as nobody runs drives that hot.

My point is that Nuvyyo says there is zero thermal problems with at least their qualified internal drives (which aren’t anything spectacular).

My point is that according Nuvvyo, you’re trying to solve a problem that cannot exist.

My point is that according Nuvvyo, you’re trying to solve a problem that cannot exist.

Ok, I’ll let you know when I stop laughing. It just cannot exist I tell you, they told me so. Sorry but you walked into that one.

Ohh and I’m not trying to solve a problem, I solved it.

The bigger question is how long will Nuvyyo say this isn’t a real problem?

If they feel it’s not an issue then it’s not an issue for them and it will continue to be a non issue. For those concerned like myself working on a solution to our concerns is a good thing. For those that feel this is just bashing the product you should really see it as just a bunch of nut jobs with unwarranted concerns rambling about nonsense and skip over this thread

Nuvyyo doesn’t have any plans to submit a nomination for President of the United States, do they?