Fella’s thanks for all your feedback. If this were mine I wouldn’t mind some fan’s etc. but it too risky at my daughters house with a toddler around so I’II have to look for another solution/another manufacturer. If anyone has some Idea’s I’m all EARS. <. : ). It doesn’t seem that there are a lot of good choices out there which seems strange given that so many folks want to get away from the overpriced; combusts, charters and probably FIOS also.

Any concerns pretty much go away if you run an external drive. The Quad itself is engineered pretty well with lots of aluminum pulling heat away from the CPU and the board itself. The problem really is that one of these heat-sinks is a metal plate right above the hard drive bay which just soaks the area with heat. Eliminate that heat-sink add a 40mm fan and problem solved. The heat-sink in question appears to be pulling heat from what looks like a Kingston flash memory chip. I didn’t bother to look up the PN. I added a small heat sink with good fin density to that chip Sil pads are used to bound all the heat-sinks to the aluminum.

I’m happy with the device as I have it now. And I never would suspect any risk of fire with the stock design.

So it is just the internal HHD or SSD that gets so hot in the Tablo Quads? IF an external one is used the Tablo itself does not Over-heat?

Corrrect, Technically I’ve never had my Quad ‘overheat’. The Internal HDD or SSD drives temps are what’s up for debate. Run an external and your good to go, the device itself is more then fine at the temps it runs.

Would have loved to see pics of your mod.

I can do that, the way I have the fan wire run at the moment is messy so I hesitate to take photos.

I’ll get some in the next couple days.

There’s no need for an expensive SSD, and it provides no gain over an inexpensive…
https://www.tablotv.com/setup-networking/#harddrive

I have a 1 TB Samsung 850 Pro sitting around collecting dust, I originally was going to use this in the Quad until I discovered what allegator1 did. Not because of speed related issues, more just because it’s sitting around doing nothing. The only other 1TB drive I had in 2.5 inch was a 1 TB Toshiba which is what I’m using now. It was brand new.

Thanks, but only if it’s not too much trouble. Am curious to see how your 40mm fan fits in.

I’m mostly deaf. Send all your hardware to:

Good SSD’s are less prone to failure, cheap ones…not so much. I’ve had hard drives run 15 years and still be fine. Then again I’ve had Seagate drives specifically die in months or less at least on the consumer level, their enterprise stuff fairs better…mostly.

Bet you don’t have a 15 year old SSD (well, of any worthwhile size)

Isn’t an USB flash/memory/[insert name] storage technically a “solid state” drive… in that neither actually has a drive?

A solid-state drive (SSD) is a solid-state storage device that uses integrated circuit assemblies as memory to store data persistently, typically using flash memory. It is also sometimes called a solid-state device or a solid-state disk,[1] although SSDs lack the physical spinning disks and movable read-write heads used by the conventional electromechanical storage such as hard drives (“HDD”) or floppy disks.[2]

This may be simplified for marketing and considered semantics by some, if I had a Quad, couldn’t I record and stream up to four live OTA TV channels at once?
– can’t I watch a show while I’m recording it?

This was a real question? I think you can at least record 4 while watching 2 for a total of 6. It might be more. Not positive. If I get bored someday perhaps I’ll try it.

Here are the mods I made to my Quad, the pictures are Not of the factory device as shipped. This is just what I’ve done to provide better cooling.

Here is how I mounted the fan. I just removed the 40mm space the factory unit has and mounted a 40x40x10mm fan in place. 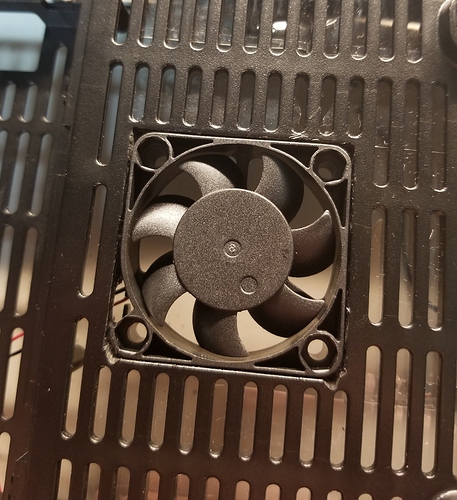 I removed all the aluminum heat sinks they provided that were mounted on the bottom of the plastic shell and one on the top that contacts the main Pixelworks Codec. 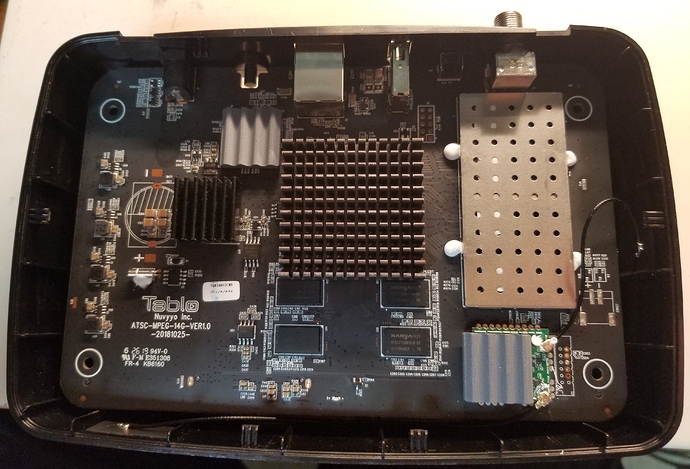 In place of the heat sink normally mounted on the top plastic case and bounded to the chip with a sil pad (silicone pad) I instead mounted the black heat sink in the photo. The other smaller black heat sink is mounted to the Kingston flash chip. I didn’t verify the part number, but it looks like a Kingston flash chip based on the prefix. The metal RF can sitting over the tuners I applied more sil pad to bring heat up from the top of the chip to the metal can. They do have the gray colored heat sinks in the photo also under the tuners as well, two of them.

Overall everything works well. The fan is wired under the board direct to the power jack via a 220 ohm resistor to drop the voltage and slow the fan.

Edit: Ohh and a blocked some of the airflow on the vents near the fan to keep the air from just pushing right back out near the fan. It’s kind of forced up and out now and over the hard drive vs just blowing back down.

Will you use some “filter”? Or is internal cleaning just part of the routine? I’m sure there’s a whole bunch of devices with and without fans that need seasonal cleaning.