@TabloTV @TabloSupport I sent feedback a few times, but whenever I disconnect my bluetooth speaker on my Android Phone it pops up an alert that the Tablo App has crashed. I wasn’t in the Tablo App, but it crashes. I’m running 7.1.1 Public Beta on the Nexus 6P.

I’m having the same issue on both a Nexus 6P and a Nexus 6, both running Android 7.0 (not beta as in your case if that makes any difference). I think this problem started after the last app update. I’ve submitted a few crash reports through Android, so @TabloSupport should be able to see them.

This needs to get merged with the other several threads into one… it’s all the same problem. @TabloTV knows what I mean.

Same problem here: Nexus 6 phone, Android Marshmallow, Tablo Android App 1.0.31 - everytime I disconnect a bluetooth speaker (my car stereo) I get the message, “Unfortunately, Tablo has stopped,” and I’m not running the Tablo app at all. 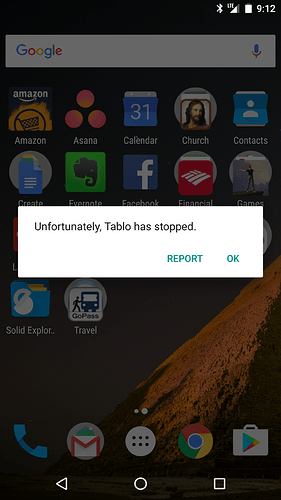 I didn’t see any other threads. I’ll let @TabloTV handle this.

FYI… I haven’t seen this problem in at least a couple weeks now, and I continue to use bluetooth with my phone daily. Not sure what changed.

I think this app update fixed it:

Hey all - We've just published some updates for our Fire TV app, Android-based apps, and the Tablo web app at http://my.tablotv.com/. We'll also be releasing an update for the Tablo iPhone app shortly. Your devices should receive an update notification (unless you have auto update selected) for version 1.1.7 in the coming hours. Tablo Web App Update – Version 1.1.7 This release includes the following updates: • Adds support for Firefox and Microsoft Edge browsers • Fix for Tablo Connect play…