Switching from Dish, any opinions on setup?

So I am looking to switch from dish to tablo with some streaming interface. I just wanted some input and thoughts on my setup.

The main problem is keeping the wife happy as she loves the ease of dish and their auto hop. Please let me know if you have any suggestions on improving my setup before I proceed with it.

antenna: did you check tvfool and antennaweb to see if your choice of antenna is appropriate to your expected need?
It seems like a decent enough antenna, but you want to make sure that you are not over or under estimating your requirements.

Tablo w/ 2TB HDD. Depends on your needs; If you are a “show hoarder”, you may want to investigate offloading recorded shows, and the number of tuner question is more of a how many different channels do you expect to record at the same time (thus I got the 4 tuner)

Streamers: Roku 3, nexus player are good devices (NP is much better IMHO). Amazon is ok, but you really want to be deep in their ecosystem in order to be happy- I see a LOT of complaints for anything not amazon on the Fire devices, most of that is related to how amazon “customized” their fork of android.

I love my Shield, and would recommend you at least consider one for your main location- the vertical integration possible is amazing (Shield w/ Plex/ Netflix/ Hulu/ I only use Tablo for recorded…&HDHR Connect for live TV… )

If the wife is big on LIVE, you recognize that the delay on starting live with tablo gets on some peoples nerves w/ the 10+ second buffering delay prior to the action starting. (That is why I use the HDHR for live)

Thank you for the information.

Looks like I have good signal, I’m not set on that antenna, the previous owners left an massive antenna folded up in the attic, I’m going to try that first and just get an antenna transformer and see how the does.

I’ll look into the shield. I really want to lean towards the fire TV as I use amazon a fair bit and the remotes will work with my echo. I just don’t know how it’ll work trying to find a show I want to watch from Tablo or Netflix. I’ll probably just buy the fire TV first and if I don’t like it put it on the secondary TV.

My wife detests live TV and commercials so that’s not a problem, it is just getting her off the auto commercial skip.

I use FireTV streamers (2 boxes and one stick). Like Kartajan said, it works best if you are in the Amazon ecosystem, and it sounds like you are if you have an Echo. Tablo and Netflix are both just apps running on the FireTV boxes. The interface is pretty easy on both IMO. My wife doesn’t have an issue using it and she is not the computer expert.

I’m interested in a Nexus Player someday, but the big issue for me is no Amazon support on the Nexus Player, and no way to even side load an app. But hey, I use Amazon almost everyday for something or other so I guess I am deep in their ecosystem.

I’ll reiterate the TVfool.com website. It really is the best for analyzing what signals you can get. Since you have an old antenna in the attic, it makes sense to use that. I would consider changing out the coax cable with new RG-6; cable can and does degrade with time and exposure to heat/elements. Since the antenna is in the attic it should be okay.

Not much to add to what’s been well presented here already. Your antenna looks adequate for most situations other than fringe reception. I have the Nexus Player and love it. In my opinion most cluck for the buck @ around $50. I’m not at all into Amazon so no conflict there.
I have a 1 TB hard drive and find it more than adequate for my Tablo2 but that doesn’t seem to be the majority opinion here. I seldom archive my recordings and always have more than enough free space. Your setup looks good to go. Good luck.

Even though I have a 4 tuner tablo, also have what many here consider a tiny drive (1T).

(I delete most shows after I watch)

I was going to go with the 4 tuner.

We don’t record that many shows so I think 1-2tb will be plenty, I’m assuming Tablo will overwrite your oldest shows to record newer ones if it fills up? We never actually delete a show just let the DVR do it for us.

Anyone have experience with a SSD with Tablo? Are there significant speed differences making worth the upgrade?

Anyone have experience with a SSD with Tablo? Are there significant speed differences making worth the upgrade?

I experienced no performance improvement using an SSD.
However, I did experience frequent disconnects.

@gdashoff I ended up using my Dish mount on the roof and the cabling infrastructure for my Tablo. I second the suggestion to double check TVFool for antenna aiming. I ended up getting a channel master due to antennas being located in all directions from my house.

It was been perfect, I just mounted on my dish mount after I removed the dish.

Transitioning from the ease of use of the Dish hopper takes a little time, but if you setup everything right, you’ll be saving money in no time.

Good idea on the dish mount, someone has the Mohu sky 60 on Craigslist for $50 that I think would not offend the wife and give better reception on the roof and is multidirectional. The channels are spread but most are south of me.

I just recently made the switch… I used a 4 Element Bowtie antenna from amazon: 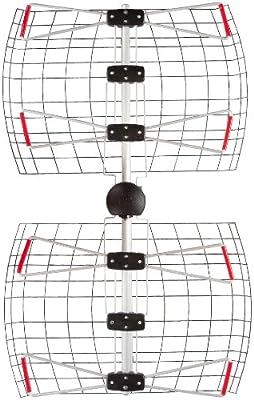 
I have it connected to about 100ft run of coax with no problems. Farthest station for me is about 55 miles. Works great and have it mounted inside my attic out of the elements.

I went with a 2TB WD Elements USB 3.0 HD. PLENTY of space for me and the wife.

I already had one Amazon Fire TV and a Fire Stick. Sling has a pretty good deal if you’re sure you’re going to use Sling where you pre pay 3 months of sling ($60) and you get $50 off a Fire TV. I did that for a second Fire TV.
https://www.sling.com/devices/amazon

My wife is very happy and actually likes the “skip ahead” captions when fast forwarding much better than the DirecTv genie we had.

I will say the Fire TV UI is much more responsive than the Fire Stick. I’ve had a couple of buffering issues with the Fire stick, but never with either of the Fire TVs (one hard wired, one wireless).

We’ve been Amazon Prime for several years, so just made since to stick with the Amazon ecosystem…

We also have an 4th gen AppleTV, that’s just waiting for the Tablo app.

Yep I was going to take advantage of the sling offer. Since I need two devices will probably have the wife sign up for the first 3 months to get a fire tv box and then I’ll sign up to get the second one. That way if I don’t like the box I can get something else for the second device.

Thank you all for all the help, now just gotta order everything and find free time away from the 2yr and 4 month old…

One more thing to consider: Playstation Vue is a direct competitor to SlingTV and is available nationwide in the USA as of last week. It costs a little more (~$30 for the slim base plan vice $20 for SlingTV) but allows 5 streams. It also has a slightly better channel lineup. If you are planning on buying 2 SlingTV subs it is worth considering.

I can’t quite find the answer for this. Can you get Playstation Vue without a Playstation or Amazon Fire TV?

As far as I can tell playstation Vue is available on PS3/4, Amazon Fire TV, iOS and chromecast via android.

Anyone have experience for Vue vs SlingTV? We rarely watch live tv so I am more interested in their on demand/DVR features which is hard to find information on. I will probably end up trying both, the big question is which one is better for watching replays of The Walking Dead?

Re PlayStation Vue: You need a Playstation to initially activate the service. Otherwise, no go.

Are you sure? I thought you could do it from the website. Haven’t actually tried it yet.

I tried it last week and although I could sign up, I could not activate the service on my iOS device. When I research the error message, it was because I did not activate via a PS3 or PS4. Overall, not a big loss as I foresee many more players getting into the OTT game.

I really want to lean towards the fire TV as I use amazon a fair bit and the remotes will work with my echo. I just don’t know how it’ll work trying to find a show I want to watch from Tablo or Netflix.

Just want to clarify this - the FireTV remote will NOT work as an Echo remote. However, the FireTV does have Alexa built in, so you can use your FireTV remote to communicate with Alexa via the FireTV. FireTV’s Alexa can do most of the things the Echo’s Alexa can do, but it will not set alarms or timers (that is the only thing I could find that it doesn’t do, but I haven’t tried everything). It can control your home automation, play Prime music, answer questions, and all that. However, to hear the responses, your TV must be on.

That said, we have both Rokus and FireTVs and I prefer the FireTV. If you have a lot of Amazon content, it is easy to access on the FireTV. If you do not, you just access your content via apps like for Tablo and Netflix and Hulu and such. I personally prefer the Android style app interface that the FireTV uses over the Roku Tablo app. Roku does support more apps than FireTV does, but the major streaming apps are supported by both systems.

One thing that I do not like about the FireTV is that it requires an Internet connection to load the interface - even if the app you want to use is installed on the box and doesn’t require Internet access to function. This happens with Tablo - if our Internet goes down, I cannot watch Tablo on the FireTV because the FireTV interface will not load (even though all my Tablo content is stored locally). Same deal for using Plex. If I am in the Tablo app when the Internet goes down, I can continue to use it as long as I don’t close the app, but if I am not, I cannot get the Interface to load to start it. This is the only thing I do not like about the FireTV.

I am honestly not sure if the same problem occurs with Roku as I rarely use our Rokus, but I find it frustrating for the entire unit to go dead because of no Internet connection.

Sounds like Fire TV with Playstation Vue is the winner. The only thing that will suck is if Vue brings the main 4 to Raleigh/Durham and get rid of the $30 plan and only have the $55 plan (for the 7 cities where they currently provide the big 4) which would then completely negate the Tablo.

Thanks for all the feed back, testing out the old antenna this weekend so should be ready to go shortly.