Switched to Nvidia Shield with Plex

I recently sold my Tablo 2 tuner DVR and picked up a 2017 Nvidia Shield and a TV tuner. I set up the Plex DVR and I have to say it’s a significant upgrade over Tablo from a speed standpoint. The Tablo worked, but the software on Android TV was sooo slow due to syncing. I couldn’t deal with it. I see tons of potential in the Shield/Plex set up that I don’t see why more people aren’t going this way. For $179 Shield plus $50 tuner, it’s slightly more expensive than a 2 tuner Tablo, but again, you get a lot more for the money and significantly better software and performance. You also get Smarththings integration, 4K HDR, etc. etc.

Just something to consider.

I found the plex server on the shield to be short on power. It was too slow. I still use Plex on my Desktop.

I tried it as well with a HDHomeRun Extend and found that it was more time consuming to get the files in a format that makes them Direct Play on all of our devices. That’s important to me because we use the Plex DVR on our Shield TV as our primary “family” Plex Server so the less transcoding it has to do the better (see @rucknrun’s comment about it not being as powerful as a desktop Plex Server).

Additionally, for live TV viewing (which granted isn’t a frequent thing in our household) Plex’s lack of the option of a standard guide grid just isn’t an option for us.

To each his own.

With using Plex on my desktop I use MCEBuddy to remove commercials. The nice thing is it also converts the recordings to mp4 and 720p so they play everywhere. As an additional bonus I get to watch shows in 5.1 if I choose too.

Secondly, I guess it’s a “horses for courses” type of thing. I do agree that the Tablo UI on almost every device I have seem sluggish. I have the Tablo UI on 2 smartphones, an older ROku, a new Roku Premier+, and on my 4K LG TV, as well as on my desktop browser. My biggest gripe is the disparity in the UI. While I understand that the controls to some degree affect the UI, there isn’t much reason to present different elements - some UI’s present a channel list for the guide, others don’t; some have a “recent recordings” list in tabular format, others don’t.)

Now that I have all my gripes out of the way, let me ask about your setup. How many channels can you record with the Shield+tuner setup? How do you add more tuners?

How does the guide look? How much does it cost?

How much storage do you have for recorded shows? I have a 3TB drive and after a week I see I’m going to have to moderate what I’m recording, since it’s filling up alarmingly fast. oh wait, I see you also have Plex (isn’t it now Kodi?) in that setup. Did you factor in those costs as well? I don’t have Plex/Kodi and it would require additional setup and hardware costs to get it setup and perhaps integrated. Adding another layer of UI stuff (and more remotes) isn’t going to please my family much - they’re very resistant to change.

I don’t think 4K and/or HDR is of any concern anytime soon for terrestrial, OTA broadcasts, which is what Tablo is intended for.

So, I don’t think I’m regretting my Tablo decision.

If we do the emoji thing, I guess you could say I’m

with Tablo, but with your proposed solution I’d be

For me paying 200 for the NVIDIA Shield, the performance has been disappointing.

Do you watch a lot of live TV? I ask because honestly once I get series records configured on the Tablo it just does it’s thing in the background. I have TabloRipper running every night so in the morning everything is in Plex which is where we do our playback as it’s a single UI for both movies and TV.

Every once in a while we watch something live or decide to watch something on Tablo after it’s recorded and before it is sent over to Plex and in those cases the performance has been quite acceptable on our Shield TV.

Remote access, and access from multiple TVs, is the reason I went with the 2-tuner instead of the Shield.

I really want to try out Plex DVR (I already have a Synology DS916+, so the server piece is there), but I already spent $150 for lifetime guide from Tablo, so it’s hard to justify the Plex Pass cost. Also, I have a 4 tuner Tablo, and would have to invest in an HD Homerun as well. I know I’ll do it at some point, as I’m sick of all the issues we have with Tablo, but I just don’t know when I’ll finally break down and buy that HD HomeRun. I suppose selling my 4 tuner tablo if it works out would help with costs.

From what I understand, Plex is working on a more traditional guide for Live TV.

So far has been super fast compared to my old Nexus Player. Works great for my needs. Much faster loading up a show in Plex than it was for me in Tablo since I would turn Tablo on once a week or two. The syncing was terribly slow.

Furballs, Plex DVR and Live TV lets you watch live TV and access your recordings remotely. You can access all of that from multiple TVs throughout the house using a simple Chromecast.

Silence, sell the 4 tuner Tablo and grab the Shield and a tuner. You don’t need to buy the $100 HD Homerun Connect or the $200 HD Homerun Extend. Pick up a usb tuner stick for $60 I think and you’re good to go. There really isn’t a requirement for the HD Homerun products which cost more. I actually preferred the direct connection to the Shield to take my network out of the equation. Much faster that way.

Are you saving the content direct to the HDD connected to your Shield TV then? If I were to move to using Plex DVR I would go with a HD HomeRun product again because I much prefer being able to save the content to a NAS like I do now and that NAS is backed up to another external HDD for redundancy.

I would really investigate the plex interface and where it stands at this point in time. Compare the two before buying anything else.

I have Tablo 4 tuner and it works really well for me. The plex live tv and dvr interface are not very good imo right now. Check out the plex forum and the plex reddit forum.

I use plex as well and it would be VERY nice if the Tablo channel would integrate with plex for dvr. Or if the two companies would partner up.

Just do your homework.

Hello aspesi4. Perhaps you can help me.

I am trying to set up the usb TV tuner on my Nvidia Shield media player with a 2 tb usb drive, running the Plex media server with a lifetime Plex Pass.

When I get to the point in settting up the usb tuner where it downloads the Guide, it has been spinning for hours and I do not see a Guide in any of the Plex apps.

Any help appreciated. Thanks. 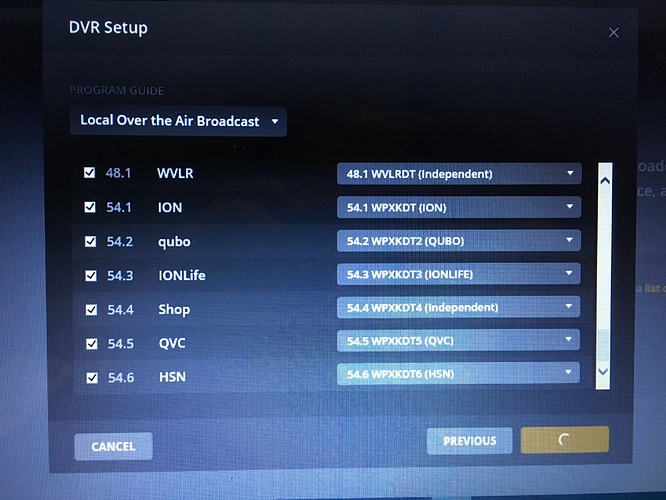 Hm, it should have started the guide download and then let you return to the main Plex interface. Maybe an intermittent issue with their guide downloading?

Furballs, Plex DVR and Live TV lets you watch live TV and access your recordings remotely. You can access all of that from multiple TVs throughout the house using a simple Chromecast.

I use Tablo as a whole home DVR/live TV system. I have 4 TV’s throughout my home & almost every evening there are 3 TV’s with 3 different programs on simultaneously - every once in a while it is all 4.

Your system is good for 2 recordings at once, but correct me if I am wrong but with chromecasting you are limited to only one program at a time. And exactly how dependable is casting?

Has anyone tried the HDHomerun DVR?

I just noticed that they now have it offered at $35.00/year. They also are now advertising a HDHomerun Connect Quatro for $149.00, but it does not seem to be available just yet. Their site takes you to BestBuy to purchase one & it simply says Out of Stock.