But it gets worse. What does that ‘good’ quality during a rescan actually mean? How good is ‘good’. Signal quality for DTV does not slowly decrease. It suddenly plummets. (Thus the references to ‘cliff-effect’.)

I wanted to know how good was ‘good’, but I do not own a spectrum analyzer. So I have developed a test using about $20 worth of attenuators (pads).

I chose a clear day without any storms in my extended viewing area. Initially I chose my strongest channel for testing.

When I repeated the test on weaker channels, after reaching the threshold - adding a 1db pad and rescanning the Tablo caused 2 or 3 orange dots to be displayed and adding one more 1db pad would cause the channel to go completely undetected during a rescan.

An RF signal moving through the air is subject to varying amounts of loss. The losses are dependent on weather conditions and we can not do anything about that. Modern television receivers include RF automatic gain control circuitry to adjust the incoming signal to within some acceptable range. (Increasing gain for weak signals and decreasing gain for strong signals.) But we still need a little reserve signal level on good days, so that it doesn’t degrade completely on bad days. (Fade margin)

So there are 2 good lessons here. 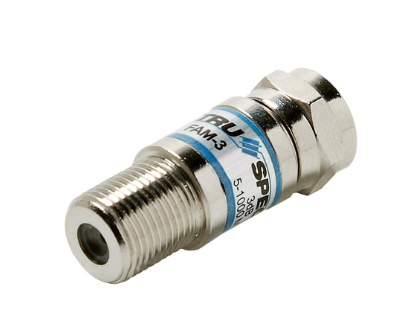 I would by suspicious of the 1 db pad.

1 db should not go from all green to no reception, IMHO.

Maybe substitute a 3 or 6 db pad in circuit in lieu of the 1 db pad as a sanity check.

I hear ya! I expected a complete signal drop out over a small change in input level but I had not expected that to happen over a 1db change.

I had bought four 1 db attenuators (pads). They were not all bad. And I was using a mix of pads as I bracketed the final values.

I worked in RF broadcasting for 31 years. (Television transmitters) At one point we started troubleshooting reception complaints from public schools. I used a lot of these pads and I never found a defective one.

You can do the experiment yourself. You should be able to get all the values you need with these 8 pads which total 40db.
one 20db pad,
one 10db pad,
two 3db pads,
four 1db pads.

This does explain why Tablo is getting so many complaints about weak signals, multiple recording segments, and complete recording failures. Reception looks perfect but then fails when it is not expected. (No intense storms at the receiving end.)

The explanation is simple once we understand what our “fade margin” actually is.

This is NOT about the quality of the Tablo itself. It is about users who don’t understand how weak their received signals actually are.

But if we can put a pad in, increase our signal levels to some usable level, and then remove the pad, we will have a system which is much less susceptible to ‘Weak signal” errors.

Or we might decide to do without the weakest channel, because the channel is not worth the effort required to get it reliably. But at least we would know not to record from it.

I did a lot of experimenting with inline attenuators but could not reach any define conclusions since the S/N ratio was impossible to accurately characterize plus the effects of multipath were giving me a headache. I finally achieved good results replacing my four-bay bow tie antenna with a small yagi. 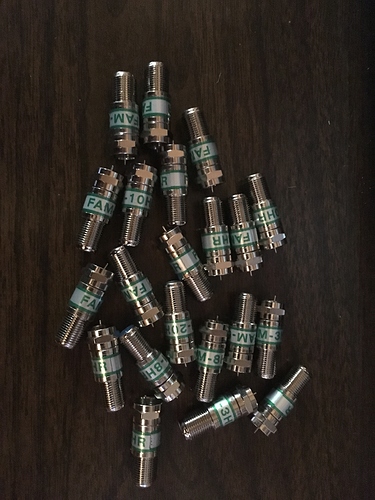 What equipment were you using to measure your signal-to-noise (S/N)?

If you can measure your field strength then you don’t need to use my technique. Just get a -60dbm to a -50dbm signal and you should be good to go. Even with some multipath.

Have you tried comparing your test on your television? That is if your TV has some “meter”. My LG has a signal strength and signal quality, it just show a bar representing some %.

Just curious how much more/less attenuation it takes to notice a signal loss or fade. Often users comment they can’t get a channel on their tablo they can on the TV. Usually the response has to do with splitting the signal.

I know “conventional” splitters reduce the signal 3db-4db. I’m not an engineer or technician, still it’s hard to think they got this far… and a dual tuner couldn’t compensate a little boost.

I did do some initial testing on my 2008 Toshiba set. But I was only recording the signal strength numbers. I did not bracket the point where the signal dropped out.

Yesterday I did some checking between the TV set and the Tablo. It seemed to me that my Tablo Dual with 64GB won a comparison by about 1 or 2 db. Better, especially since we know that the Tablo has an internal splitter to drive both of those tuners.

In running this kind of comparison you really have to be careful. The best way is to take the cable from the antenna and move it between the 2 devices. Otherwise you are including differences between splitter ports, different cables and different cable connectors. When measuring small differences everything has to be taken into account.

In any case these differences can be easily overcome with a $26 Winegard low noise indoor amplifier from Amazon. (about 20db gain with a 1 db Noise Figure) And if that causes overloading, then small attenuators can be used to reduce the overall gain. (No one sells a very low noise amplifier with a gain control.)

These discussions about the differences between the Tablo and a TV set come about because the user’s incoming signal level is too low.

Remember that a 1 or 2 db difference may mean a dropout. But atmospheric losses vary much more than 1 or 2 db. In picking up channel 16 from 55 miles away, I have found that a 9db fade margin is not good enough.

So it is that low incoming signal level which has to be remedied if the user wants reliable recording.

When designing your system, buy the best antenna that you can afford. Buy locally so it can be easily returned.

Before you start installing, locate your desired stations on a map. Do not quickly point your antenna and quit. There are different considerations to be made. First, decide if this antenna is really good enough. Insert a 10db or larger attenuator and verify that the Tablo can still detect the channels you want. Perhaps you need a higher gain antenna. Second, point your antenna at the weakest station. Then after viewing that station and the others, decide if you have compromised the reception of the other stations too much. Perhaps you don’t really need the weakest station. Or perhaps an indoor 20db gain, 1db Noise Figure amplifier will compensate for the way that your antenna is pointed.

If you need an amplifier because all channels are weak, then connect the amplifier at the antenna end. Make sure that your amplifier is designed for outdoors and has a very low Noise Figure specification. A “low Noise Figure” statement on the box is NOT good enough. You want to know the number. Protect the connections with water proof splicing tape. If you notice overloading on your strongest channel then try pointing the antenna little further way from that station, and reassess.

If you need an amplifier to get more signal for 1 or 2 channels then connect it indoors and directly to the cable from the antenna. Installing and maintaining it will be much easier indoors. Look for overloading on strong local channels. You might have to add an attenuator or two to its output and before your splitter.

Get it right and you will only be doing this once. I selected my antenna and mounted it over 38 years ago. It is a Winegard CH-8100 with very good gain and made to last. My original RG-11 was taped to the mast securely. It has a splice in it now because a dog chewed into it. (I should have used conduit for the bottom 6 foot.)

@JimH, Initially reading through this I thought is sounded like overkill for a consumer/homeowner install but you summed it up…

Get it right and you will only be doing this once.

(well, maybe the RG-11 is a bit much for most). I have the same antenna I put up some 25+years ago (when HD might have meant heavy duty). It still gets as good as a signal as what I need. But now I’m splitting it so much more than just 2 TV’s.
Fortunately I did secure it with quality RG6 through out. I recently re-routed, adding an amplifier splitter so not all the splitting is all at place. Doing it right in the first place saved me a lot of frustration.

Now, I have 2 TVs in the living room with a PC with tuner cards. Moving the tablo to the back of the house with the second TV (maybe another PC/DVR). Weather or not I’d benefit from different antenna, I was lot younger and weight a whole lot less when I was up there the first time - this one is “good-enough”.

I am not going to disagree with your comment on RG-11. That is why I included the comment about the difficulty installing RG-11 connectors.

But everywhere in my comment I was trying to emphasize getting the best signal possible.

I am not much heavier now, but I really have no business getting on my roof anymore.