Not sure what to make of this. Plex is getting into the live tv DVR game. They had the DVR functions but now you can watch live tv. I wonder if it will be available remotely. 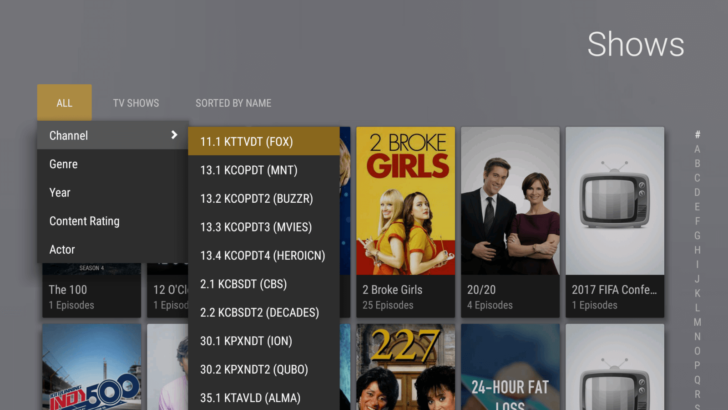 Back in September, Plex DVR launched, giving you the ability to record and save any broadcasts that your HDHomeRun tuner and antenna had picked up. It was... by Jordan Palmer in Applications, News, Videos

Official Plex blog says it will be available remote…

“It’s built right in to the Media Server, so you’ll be able to stream live (starting with our Android TV and iOS apps, with more to come) anywhere in the world through the power of Plex!”

It’s fun being a cord-cutter these days. The competition is resulting in better and better features for the end user.

This is pretty compelling.

So, Plex now does what Tablo does for about the same price assuming you already have a computer to run the Plex Media Server on? But you can only get a 2-tuner device to use with Plex.

Since I already have a dedicated Plex server it would have been an option. But I’ve already got a Tablo and with a bit of script-fu they work together for me.

There is something that confuses me, though. Why is it okay for me to set-up an antenna on my own property and capture OTA tv which I then stream across the Internet to wherever I happen to be but it isn’t okay to do the same thing by renting the antenna and associated hardware from a service provider (remember Aero)?

I agree. I am very happy with my Tablo. This would only have been another option.

I posted a question on their site in the comments asking if it will work with the cablecard ready Silicon dust receiver. They deleted the comment.

They keep deleting my comments. I have a feeling they don’t want to let people know it works with cablecard ready boxes.

The keep deleting my comments. I have a feeling they don’t want to let people know it works with cablecard ready boxes.

If it does, that’s a shame. I live in Canada so no cablecard options, but if I could, I would seriously consider it. That is a big selling point.

Hopefully Tablo can join the Plex Live TV/DVR party, otherwise it would be another ding against a product that’s having a really hard time innovating. The new Tablo unit launch was pretty underwhelming given the length of time that’s been between releases.

This interesting for me as I use Plex as the primary media player on the Shield TV on our main TV. Tablo recorded content is moved over to Plex overnight using Tablo Ripper already.

The prospect of simplying to one UI for family and wife acceptance is compelling. If I can remove some moving parts (that will eventually fail) of the overall solution, that’s compelling.

Having said that, our Tablo has been pretty solid and I know Plex DVR has had plenty of issues, so time will tell if it’s actually a viable solution.

If I can’t pause and rewind live TV, it’s a non-starter for me.

Of those 4 limitations, how many does the Tablo satisfy?

I’m not aware of being able to start recording a show I’m watching live on the Tablo. At least I haven’t figured out how to do it on the Roku interface (which is what I use for live viewing).

I don’t have a “Tablo account” so I can’t share outside my home network, but if I could is there way to “add friends” to be able to stream remotely from my Tablo? I wouldn’t want to do this as I think it would use up too much of my bandwidth (and the inherent limits of my 2-tuner).

Valid concerns from both sides. Like I say, it’s just compelling to me because this competition just benefits the end user. I think since our TV viewing decreases in the summer I’ll try both side by side and see how it turns out.

Remote Tablo access is a matter of pairing. If your friend brings his phone to your house and pairs his phone using your network to your Tablo, then he can use your Tablo remotely.

There are limitations with regards to tuners of course. So a person watching remotely for Live TV is likely occupying two tuners, one for the show and one for the transcode to the phone (assuming remote viewing isn’t don’t a full speed). This sort of thing plagues the two tuner device in particular (the limits of the two tuner you mentioned).

And yes, I don’t think Tablo has any kind of “start recording now” style feature while watching. But would be nice to have.

I checked the available channels according to Plex, and I was surprised that the list was a lot longer than what I normally receive.
Could the Plex-supported tuners really be that much more efficient than the Tablo’s? The lack of channels has always been frustrating for me, but I’ve never really thought to blame the Tablo for it (nor my antenna, which was roof-mounted by an engineer).

Would love to see Tablo as a supported unit. Then I wouldn’t have to pay for the channel subscription. Also the scheduling is faster using plex. I’m keeping Tablo instead of going to another unit as I like the idea of going on vacation, turning off my plex server and tablo still works.

They answered my comments today. I guess they were not sure they wanted to acknowledge it publicly.

It would seem that Plex updated their software to now work with ALL HD HomeRun tuners. (previously my old dual tuner was too old)

It would be awesome if someday they would open up to Tablos as well but my hunch is there might be some technical hurdles to cross to enable that? Tablo is the only standalone 4-tuner hardware I’m aware of besides a TiVo. It would be awesome to only have to have the box on the network.

Aside from that, I can see how Tablo would need to be very careful with that integration in the interest of their own prospects. Regardless, a guy can dream.