Oreo is rolling out on the Shield TV and TVs are starting to ship with it (Hisense and Sony soon).

Are you referring to the new ability to bubble content up to the home screen like this? 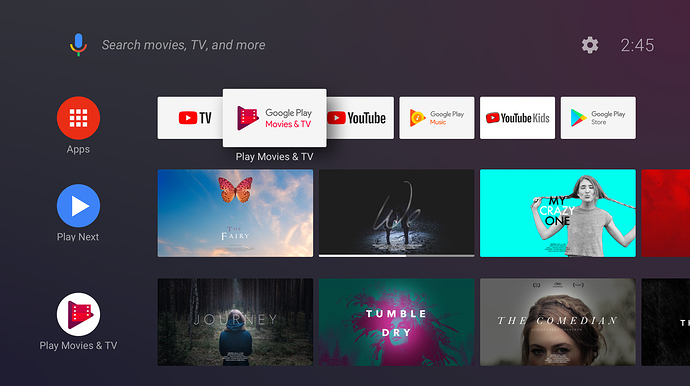 If so, that’s something we’re definitely taking a look at!

We have done this already on the Apple TV with ‘top shelf’.

If you are talking about the top shelf photo on Apple TV it is nothing like that.

Some of the current apps even autoplay when you highlight surfaced content in their channel.

I’m specifically referring to the Watch next channel and Tablo’s own custom/default app channel(s) right on the home screen UI.

That basically how ‘top shelf’ works on Apple TV. Right now we display and allow immediate playback of the ‘most recent’ recordings on your Tablo from the Apple TV home screen.

From what I understand, Oreo will allow this on Android TV. The screenshot shared above is from the link you sent over

Similar but different. The channels/rows are like categories and Tablo can do as many as they want on the home screen. Recently recorded like you did for Apple TV but also categories like sports, current live tv, etc all at the same time if the user doesnt toggle them off.

This video from the verge summarizes it briefly. After you’re done taking a look get to work on it

Not to mention that they can be channels as well as shows. There could be live previews for ABC etc right on the home screen vs just images.

@orpheus Funny thing is if Tablo would have done Live Channels support back when they said they were going to they would already have full support for Oreo through the Google Live Channels app.

HD Homerun didnt have to make any changes for Oreo since they support Live Channels. It works amazing on Oreo.

So where did tablo commit do integrating with Live Channels?

@orpheus - No update yet. This is on the roadmap but I don't have an ETA yet. We don't as of now have an API openly available but this is also something we'd like to do moving forward.

Maybe you will get your wish.

But there are usually hundreds of ideas on a road map that never get implemented.

“Something we’d like to do” and not having an ETA is really not a commitment.

I kind of remember a promise from 2014 where tablo promised the Roku app would have feature/function compatibility with the WEB app.

How did that work out after 4 years. Tablo doesn’t even have consistent feature/functionality across it’s existing apps.

I’ve been developing software for customers for many years.

Telling a paying customer in writing their feature request is on their roadmap is absolutely a commitment. ETA or not.

Now lets get back on topic. Please find another thread to police/rant if you have no interest in Tablo releasing Oreo support for Android TV.

Don’t be foolish enough to assume I’m not interested in AndroidTV.

But my life will go on without tablo integration with Live Channels.

And I too was in R&D and I only believe that a feature is committed when product management indicates they are willing to schedule and pay for the feature. And it can be monetized against any other feature on the road map.

Any updates on this ?

I’ve been developing software for customers for many years.

Telling a paying customer in writing their feature request is on their roadmap is absolutely a commitment. ETA or not.

Now lets get back on topic. Please find another thread to police/rant if you have no interest in Tablo releasing Oreo support for Android TV.

Zippy has no interest in anyone pointing out flaws in Tablo’s implementations or plans.

It makes him feel uncomfortable. And we all know, if he feels uncomfortable, then it’s your fault for making feel so.

When I’m interested in AndroidTV, I use Plex on my Nvidia Shield/hdhomerun. So I really never feel uncomfortable. And I doubt that tablo would reveal it’s plans concerning 3rd party vendors until it’s already cooked.

What you just said has nothing to do with this thread.

“Something we’d like to do” and not having an ETA is really not a commitment.

How about “this is on the roadmap”? Is that a commitment, or not?

You managed to avoid that in your blind defense for the Tablo folks and their product.