If you get a preamp for an attic antenna, let me recommend the Winegard LNA-100 ($30). However I just came across an inexpensive preamp the Antop Smartpass 601 that is very good. It is just a little less sensitive than the LNA-100 (by about 2-3%) but includes an LTE filter at half the price ($15). ben1 here at this forum uses an Antop antenna that has this preamp builtin and it is a very good antenna\preamp combo.

Thanks for putting all this together - I would have never figured that out.

Well, over the last week, we have been having fairly strong thunderstorms with lightning. No strikes and antenna is up in the attic.

Between nearby lightning and me putting the Tablo close to the WiFi router, did that possibly partially fry the tuner? I just put it nearby to be able to get the best throughput of the video stream. No where did I see it mentioned any thing about being too close. Makes sense though.

Wonder if a remote login by tech support will be able to tell if the sensitivity of the tuner is affected?

Since the stations you stopped receiving are mostly from one direction (280-300 degrees), could those stations have gone to reduced power because of the stormy weather? Or could something obstructing transmission\reception have gone up in that direction (like new construction)?

You sure are coming up with things to think about (that I would not have) … I don’t know about stations reducing their power. Is that something they might do?

And, I do live in a parish in La. that is being built up like crazy. I call it the ‘subdivision per week club’ - no high rise bldgs. - just new single family homes, usually 1 story.

They sure do reduce power. In inclement weather. Or when scheduling work on the antenna or broadcast tower. Or even during regular times such as late at night when there is less demand since power costs money.

Obstruction may not be solely high rise buildings. A new cell phone tower for instance… I placed an LTE filter next to my preamp because I was getting LTE interference (I’m caught between cell towers close by).

BTW multiple antennas in an attic can interfere with each other if not well spaced apart. Do you need an antenna for each room in the attic? Or can you split the signal from one antenna to separate rooms? In which case you might need a distribution amplifier since a splitter reduces signal strength for each leg.

I had to move one antenna 6 feet away from another antenna since there was interference between them. That is generally the rule of separation distance though moving an antenna to a different location may disrupt its reception capability…

Good point - one of those antennae has a cable going to a Channel Vision 8-port ‘distribution’ amp (powered splitter that boosts the signal) - to boost the signal and split it 8 ways. I then have coax run to bedrooms and other locations I wanted to plug in a tv, using that one antennas signal. Works great on al the tv’s - Samsung, Vizio, EYE-TV.

This is totally separate from the Tablo antenna. In other words, the Tablo has it’s own antenna, with a cable run directly from the antenna to the Tablo …
They may need to be moved as they are about 4’ apart.

Have you tried plugging the Tablo into the Channel Vision distribution amp to see what that could yield? My Tablo is tied into my Channel Master 4 port distribution amp (3 TVs on the other ports).

I will have to try that- see if a boosted signal makes those weak stations come in.

Nope - even boosted signal from the splitter amp has no effect on redirecting those weaker channels… somethings changed as I was getting those with no trouble.

There was only 1 chnl. that was weaker than all the rest 41-1 (This Tv chnl.) - that one does not come in at all where it used to be hit and miss.

@dmrome if you’re experimenting here is the Tuxedo antenna I built with some modifications to the original design: 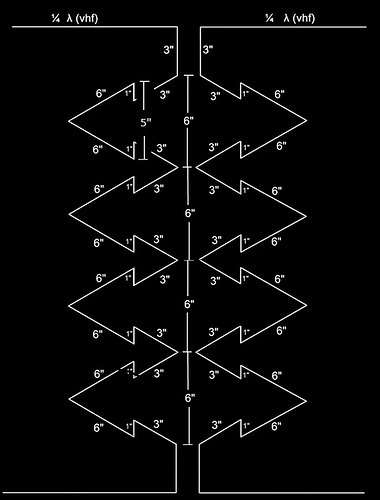 If you don’t need VHF, make the two VHF elements 10" and they will act as additional UHF elements thus making it a 6 bay antenna. Altogether all the Tuxedo elements double the amount of metal on a normal 4 bay making it more powerful.

By experience I found that keeping the length of an antenna to within 36" keeps it within the bounds of the transmission “cloud” (which is why I scrunched it). If you don’t need VHF and turn these into UHF elements, you can cut the distance from 3" to 2" of those top and bottom elements from the 4 bays.

This has become my most powerful antenna and gets a channel 51 miles away near Tennessee (I’m in northern Georgia). This is a fractal design and those fractal bends defend against multipath interference. Putting a 40" x 32" reflector 4" behind it will add about 25% more power to it.

My wife will like the Christmas tree idea - LOL.

From what I have been viewing (YouTube Videos, etc.) and what I’ve read … I may not need any amplification at all … however, a better antenna (w/VHF) for the Tablo is probably needed. I will be building this version of your antenna soon. Looks like exactly what I need.

So from this chart, 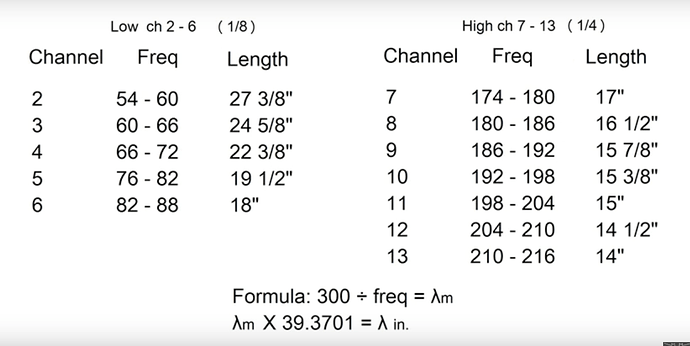 If I target those 2, the ones I want the most, I would guess I may get lucky and get others in that band also.

BTW, we will be camping in Northwest Ga. (Fort Mountain State Park) in late Oct. looking for fall colors!

When I made my VHF antenna, I chose the channel wavelength I used the most. It brought in the other VHF channel easily. However a split average will also work. OR how about this - make the upper VHF element the length of the first VHF channel and the bottom VHF element the length of the second VHF channel. The VHF elements don’t have to be symmetrical in length! In fact another antenna designer has modeled what is called an FF6 (free form 6 bay bowtie antenna) in which the antenna elements are of different lengths corresponding to different frequency wavelengths:

When I made my VHF antenna, I chose the channel wavelength I used the most. It brought in the other VHF channel easily. However a split average will also work. OR how about this - make the upper VHF element the length of the first VHF channel and the bottom VHF element the length of the second VHF channel. The VHF elements don’t have to be symmetrical in length! In fact another antenna designer has modeled what is called an FF6 (free form 6 bay bowtie antenna) in which the antenna elements are of different lengths corresponding to different frequency wavelengths.

I am so glad you responded … you have a wealth of GREAT info … I can’t thank you enough !!!

The diff. lengths on the top an bottom sound good to me - that is what I will do.

This will go in the attic - so no weather issues …

So my question is, for the base (backbone) of the antenna - did you use wood or plastic (or something else).

A wooden frame is OK in the attic; I did what Mike did in the video. Since my attic has a floor, I screwed the wooden antenna base to a wooden square platform to stand on the attic floor.

For the reflector I cut a piece of cardboard 40" x 32" and taped kitchen aluminum foil to it. Now an interesting reflector is the one shown in the FF6 model:

*** Now I’m not sure about your channel problem anymore - I was thinking of this powerful antenna as a way to get the New Orleans channels. This Tablo issue is a real head scratcher… Perhaps a new antenna will solve it but I’m not sure it is an antenna problem! You’ll have to keep us informed. ***

That sounds great - in my attic, I have a cross brace that faces west that I easily can fasten the antenna to.

Previously my best antenna was the venerable Channel Master 4228 (an eight bay). This one beats it. It brings in 2 additional channels and stabilizes another. The CM cost me $100; I eventually sold it for $80. Building this one out of Walmart coat hangers cost me $1.24. When one builds one’s own, one can build multiple antennas at very low cost and face them wherever one needs them facing. It cost me less than $2 to see if I could get that station 51 miles away. One can experiment at those costs without worrying about expenses. I did not use copper wire! In his latest video, Mike doesn’t use expensive copper but standard steel wire.

BTW your ethernet problem, could the issue be not at the Tablo end but at the router end (a bad port)? Have you tried other ports on the router for the Tablo? I had to replug a device into a different port when a port went bad.

My first one - I used coat hangers - I remember sanding the varnish off to get to the bare metal.

Wouldn’t mind using that for the new Ultimate antenna, but doesn’t the wire need to be one continuous length? (one piece)? For each side.

Yeah - I tried almost every port … the 4 Gigabit ports on the back of the router, and many of the ports downstream on the 16-port 10/100Mbps switch. Nothing worked.

Tablo support wanted me to ‘adjust’ the modem … however in my situation, we have Fiber Internet with a local company (EATEL) and there is no modem that I have access to … there is only a locked box outside where I am sure they convert the light fiber signal to a digital signal … and all I have is a Ethernet cable from ISP to plug into to the WAN/Ethernet port on the back of my WiFi router.