Ok … on Live TV, all of a sudden, last night … my available channels went from 23 of them to now only 4 of channels. Still same this morning after powering off unit and rebooting it.

I keep getting the “Player Error” - Weak Signal message. I have the Tablo within 3 ft. of the WiFi router, using the 5Ghz chnl., and I double checked the antenna signal with an EYE-TV unit (connected to my Mac) and also on my new Samsung 4K HDTV.

The ‘missing’ channels ALL work just fine on the 2 aforementioned tuners.

It just started doing this on it’s own. AM I missing something?

How can I troubleshoot this? Any ideas?

The Samsung has one of the best tuners so it can get channels the Tablo will fail on. Both my Samsung and LG TVs get channels my Tablo won’t. In this extremely hot and humid weather in the southeast this week, signal strength will drop by 20 to 30%

How can I swap the Samsung TV tuner with the Tablo tuner?

Two things… if Tablo is within 3 feet of your router, you might try connecting via Ethernet. May not help with the weak signal issue, but couldn’t hurt. Next, you might try having Tablo rescan for available channels. Over time, mine had lost a few channels, and rescanning brought them back.

Unfortunately, connecting to Ethernet instead of WiFi does not work. Tablo support sent me a new Dual Lite a couple of weeks ago because I could not get Live TV to work at all when connected to the Tablo via Ethernet. Connect via WiFi and all is well.

Being 3 ft. from my WiFi router (the streaming WiFi signal strength) probably oes not have much to do with the TV signal coming to the tuner. Multiple TV’s are getting a good clean signal on several of the ‘missing’ channels where the Tablo just gives me a ‘player error - likely due to weak signal’.

I just love being able to watch Live TV or recorded shows any where on any device with the Tablo. Just want a more sensitive tuner. Hope they come up with a firmware or software upgrade to address this.

I’ll even volunteer to be a Beta test site if they would like to do that.

You may want to try moving the router and Tablo a few meters further apart – especially if your setup is using splitters or your if antenna is mounted indoors and/or uses anything less than RG-6 quad shield.

It is possible that the “front end” of the Tablo is getting “swamped” or overloaded with signal, even off-band signals. Separation by several meters helps in these cases and is very inexpensive to try.

Do you have a preamplifier installed or even a distribution amplifier before the TV\Tablo split?

How far are you from the broadcast towers?

“Being 3 ft. from my WiFi router (the streaming WiFi signal strength) probably oes not have much to do with the TV signal coming to the tuner. “

If your router is within 3 feet then it may well be swamping the Tablo tuner. And that could have been happening even when you were using an ethernet cable. Because you probably had the WiFi turned on anyway.

As a test turn the router WiFi off and use an ethernet cable to the Tablo. Then rescan.

OR move your router 25 foot away from the Tablo. Then rescan.

I am approx. 9 - 11 miles from the Baton Rouge Towers - all of the stations I want to receive are somewhat clustered in a West to North West direction. 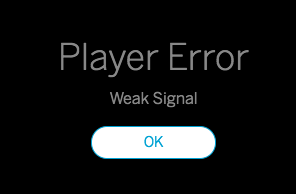 - see pic attached.
I think I have a defective unit - at this point.

" I think I have a defective unit - at this point.

Don’t give up yet.

See my reply above.

I saw your earlier message and moved the Tablo to about 20 ft. away from the router. Went in and re-mapped it to WiFi 5Ghz chanl. and just did a re-scan. Still missing lots of chanls. on the low end of the list (chnl 2 - 27) - upper chnls 27 and higher, ‘most’ of them come in.

I can’t use the Ethernet - had Tech support try to help there - they could not figure out why my WiFi works but as soon as I plug in the Ethernet Cable, No Live TV AT ALL. THey tried to remote log in but could not find what was up. So, after several days working with them on this, I just said 'use WiFi only. My concern is 2 fold - if the WiFi goes out, I won’t have a plan B option and I wish the Ethernet would work as I would guess that it would be faster than WiFi.

Can you return or exchange this unit? One thing goes (ethernet), then reception…who knows what after? Perhaps the two things are a sign of the unit going downhill.

Did you get more channels after you moved the WiFi router?

How many channels before and how many after?

This IS a replacement unit directly from Tablo support - they were able to remote log in to my first one that I bought from BestBuy and they shipped me this one. So, I guess returns would have to be thru tech support. 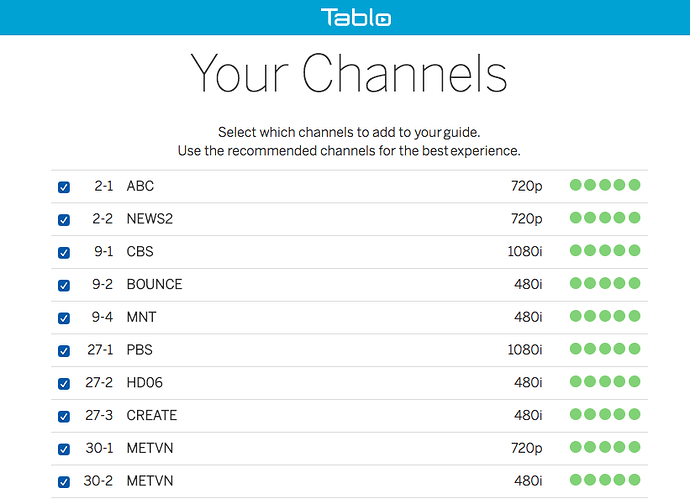 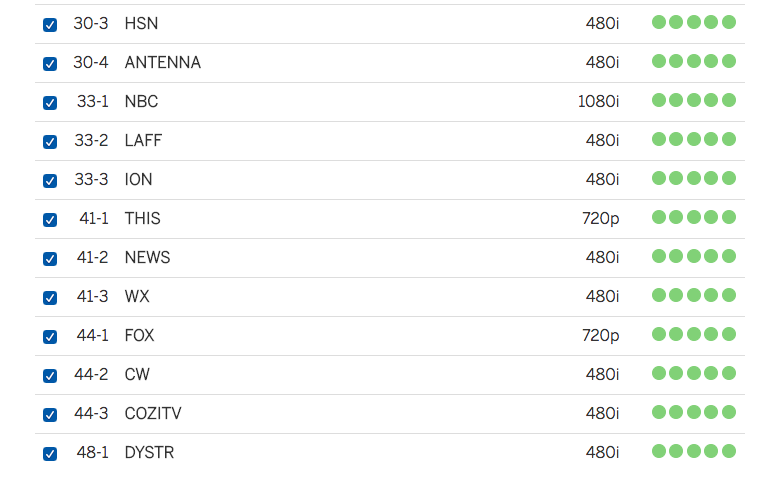 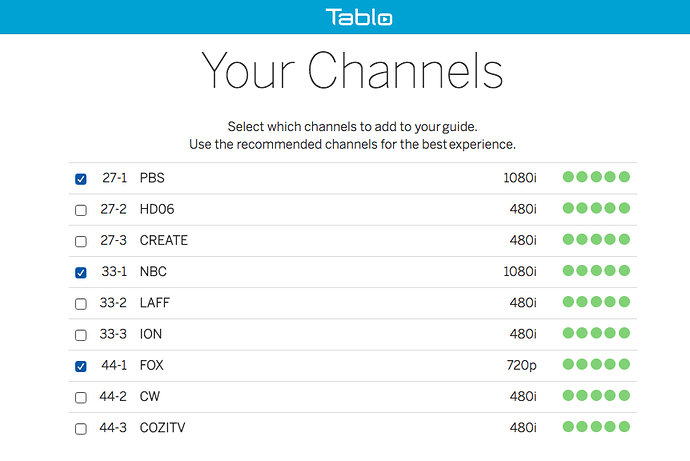 Clarification - the BEFORE channels (23) was last week when everything was working good.

Did I blow up the tuner by putting it that close to the WiFi router?

Can you provide us with a TVFool report? Are all the channels from one broadcast tower or from different broadcast towers separated by a few degrees?

If you blew up the tuner than you wouldn’t be getting any channels. 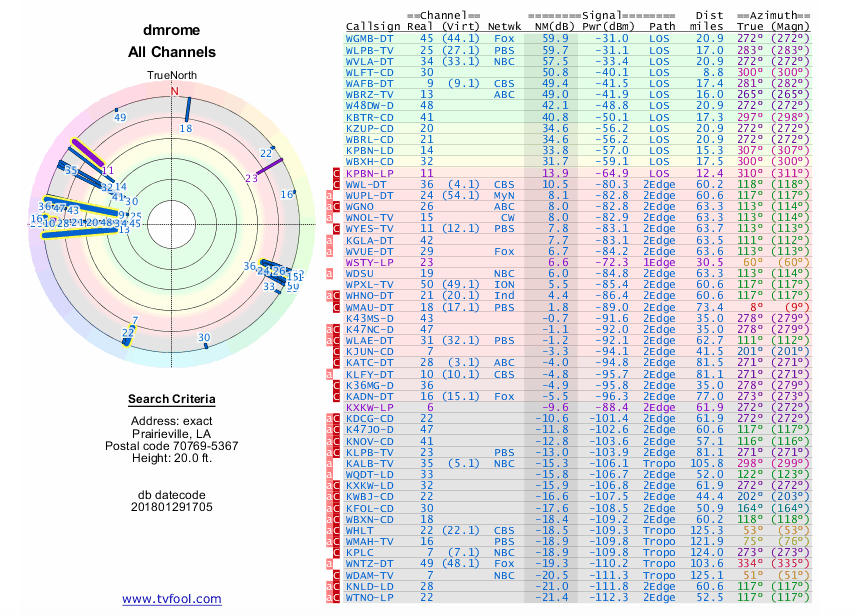