My area just got hit with hurricane Ian, and I was very dissapointed to learn that the Tablo is useless without internet. While I understand the features supported with internet being available, and the issue with not knowing the “exact” time, I could have really used some basic functioning of the Tablo during this emergency. Like the ability ot just tune into specific stations (without the guide service would be fine), or the ability to watch recordings I already had. At a minimum, just being able to watch the locan news would have been a huge benefit. Can you please add an emergency mode that supports basic channel selection?

I thought as long as the router worked you could watch live TV and recoding’s.

As long as your DHCP server stays up the assigned IP addresses will be renewed. No valid IP address you are out of luck. Of course only some of the various client devices will work without an internet connection. Roku use to be one.

But that is the purpose of the HDMI model.

I thought as long as the router worked you could watch live TV and recoding’s.

If the internet goes out but nothing gets rebooted you are fine.

My area just got hit with hurricane Ian, and I was very dissapointed to learn that the Tablo is useless without internet.

I would guess your Tablo rebooted because power went out. I was also disappointed when I first encountered this issue. My router will let me attach a phone or a hotspot to it as an internet source(hotspot) via USB. If you can do that and open the Tablo app on the devices you want to use that should get things operating again. Then you can disconnect the phone or hotspot and everything should work as long as you don’t reboot the Tablo.

Actually I have the Tablo, my router/switch, and cable modem all on a UPS and those devices never lost power, and I still could ot use the Tablo once internet went out. We did lose power for a few seconds here and there, but the UPS kept the devices up and running.

IP address have lease times. For consumer products it’s usually 24 hours. As the lease moves toward expiration it enters renewing and rebinding states.

If the lease expires, as it would if the DHCP server is down, the TCP/IP state moves to init state and network processing must stop.

Of course many IP providers only supply a modem and the customer provides their own router which has a DHCP server which may or may not go down.

My ISP provides a router which contains a DHCP server. The internet rarely goes down but when it does the DHCP server goes down. And since the ISP router doesn’t support bridge mode it becomes more trouble then it’s worth to also activate a DHCP router on my own router which actually is working as an access point.

It may be that a Token or some other data expired on the device you are using to watch the Tablo. You would probably need to be online to renew it. That’s why I recommended opening the app you want to watch well making a temporary connection to the internet.

The whole thing is a pain and I would love if they updated the firmware to handle this better. I have managed to offline connect the 3rd party app OTA2GO in the past.

This is dependent upon devices/app. Although internet access is required: 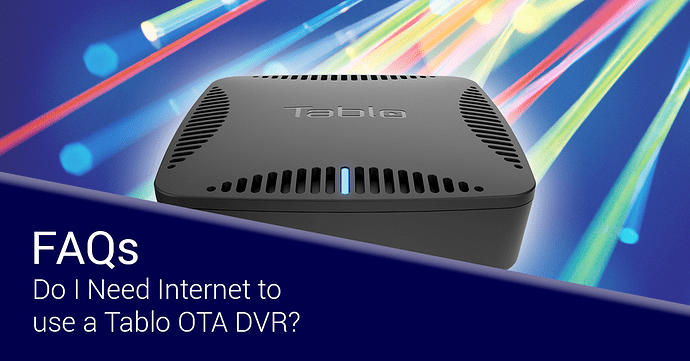 Tablo FAQs: Do I Need Internet to Use a Tablo OTA DVR?

Yes. You DO need internet access to use Tablo Over-the-Air DVRs. Keep reading to find out why.

Most Tablo apps have two ways to ‘find’ the Tablo on your network. First they will attempt to locate your Tablo by touching base with the home server at Tablo HQ. If that fails because the external internet is down, the app will fall back to its last known location on your home network.

However, the Tablo web app (at my.tablotv.com), and Tablo apps for LG Web OS, Samsung TIZEN, and Xbox One do not have secondary fallback discovery, so will not be able to locate your Tablo DVR if the internet is down or unavailable.

This isn’t all inclusive. Since internet access is required… it’s still possible one time your device may work with out, another time it may not. It’s never been a secret - it’s on the side of the box (I agree it’s a bit mis-leading)

Connecting an antenna to a TV will allow you to get OTA broadcast. TVs have OTA tuners built in and work for emergency situations reasonably well being self contained.

it’s still possible one time your device may work with out, another time it may not.

For me the streaming Tablo usually works without internet for short periods of time like a few hours as long as I don’t reboot anything.

Here are some great observations using the HDMI model without internet. You can see one of the big issues is time synchronization. The HDMI version gets out of sync very fast. There is no reason to think the streaming version would do any better.

Started new post as not to clutter up https://community.tablotv.com/t/tablo-during-an-internet-outage/23660/38 which is geared toward Streaming device questions Disclaimer on firmware 2.2.40 (2207416) because don’t want to check for update yet as it would then re-populate the guide and mess up testing various functions with no guide data. Purchased Quad HDMI after support (very good on my questions) said it would work using manual recordings and no Internet after initial install. Installed, …