Has tablo indicated what the minimum version requirements are for their HDMI ATSC 3.0 network based clients?

There are no network based clients for their HDMI ATSC 3.0 DVR.

Thought you might want to see this video from Tyler the Antenna Man which breaks down some of the details about DRM on ATSC 3.0: You mean someone is comparing a DRM explanation of a product with only network apps to one with no network apps. What a surprise.

DRM does NOTHING to prevent rebroadcasting. Just saying. This is just bad stuff. Sigh.

I thought one of the features of ATSC 3.0 A/360 is that the device doesn’t accept the broadcast unless it passes through the certificate process. So there is nothing to rebroadcast.

Of course you might be able to defeat A/360 and X509 V3. But is it worth the effort just to decrypt an episode of Green Acres.

Rebroadcast is simply a matter of capture and transmission. Easily done. Arguably easier than the very thing they are trying to avoid. Zero effort, no magic, no decryption, etc. Again, while we can say criminals aren’t stupid, we can also assume that neither are the forces behind this “drm”. Again, it’s not about what they’re saying it’s about.

Also, there’s a plethora of “cheap chinese” devices that do DVR with ATSC 1.0 connecting directly via HDMI. Just saying…

I’d say Tablo has attracted a lot of users that prefer the streaming model along with some that got used to it. Personally streaming my DVR was exactly what I was looking for when I bought my Tablo. I’ve been streaming my personal media for at least 15 years now and I HAVE NO INTENTION OF GOING BACK TO A DIRECT CONNECTION!

I really hope this DRM doesn’t kill our ability to stream media.

@TabloTV
I know why Tablo says the new Tablo doesn’t allow streaming on this device but I’m not sure why Tablo can’t at least support streaming ATSC 1.0 content.

Can anyone here confirm or deny whether the Tablo 3.0 DVR will support Technicolor HDR? I emailed Tablo in January and they weren’t sure whether it would at that time. According to Technicolor’s website, 31 ATSC 3.0 stations are already broadcasting in Technicolor HDR. Sinclair is 100% behind the standard and they own stations in nearly every local market. More markets are coming online every week; including Omaha where I live just this past week. I’m looking to get my first 3.0 set top box, but Technicolor HDR decoding will be a must for sports broadcast on Sinclair OTA stations (and potentially others). The backwards compatibility to SDR is key here. That way they only have to spend the bits for one stream that can support both SDR & HDR playback depending on the receive device. Pretty ingenious technology, in many ways similar to how analog TV was able to add color without disrupting the black and white broadcasts.
Hopefully Technicolor HDR support as well as DRM compatibility can be resolved prior to the official launch of the product.
https://advancedhdrbytechnicolor.com/

I would be happy with a device that supported ATSC 3.0 with SDR, HDR10, HLG.

And given the problems of network devices with AC-4 and DRM, a solution that also supported these.

Of course like many I don’t have a use for a HDMI device.

I’ve noticed that the Tablo Quad HDMI ATSC 3.0 is no longer advertised on the scrolling banner on Tablo’s homepage. The only way you can even find it is by searching for it on your website by name. It’s not listed when you click on products to purchase.

Per your website:
Tablo ATSC 3.0 QUAD HDMI OTA DVR is available for pre-order now exclusively at TabloTV.com at an MSRP of $299.99 US with an anticipated ship date of spring 2022.

(April 2022 Status Update: Due to evolving DRM broadcast requirements, the initial production run has been delayed.)

The April 2022 Status Update said:
Because of this, we anticipate a manufacturing delay of several months while we confirm the certification requirements, add DRM capabilities to the product, and obtain certification from the ATSC 3.0 Security Authority (A3SA).

Spring is long past, summer is just a memory, the leaves are falling and winter is quickly approaching. I’d say that we’re past the several months delay by now. Can we hope that Santa will bring our new Tablo by Christmas or was this just a really cruel April fools joke?

It’s not listed when you click on products to purchase. 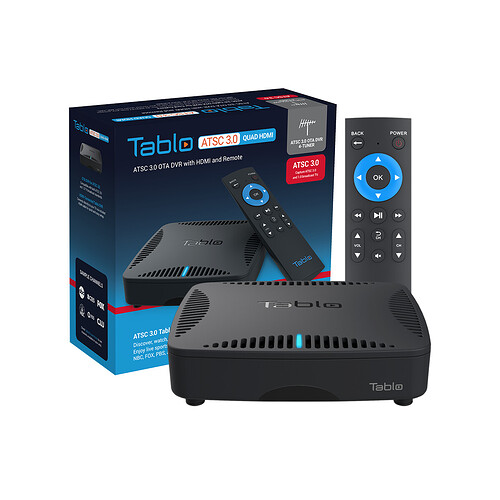 (Though their intrusive banners cover the top)

So, I guess still no ETA?

We’re working away on things and hope to share a more robust update soon.

I don’t want to buy a brick or a partially incompatible device so I’m willing to forgive you for trying to get it right.