No, I’m assuming that @TabloTV hasn’t received any word yet on a shipping date, so they have nothing to report.

I’m assuming that @TabloTV hasn’t received any word yet on a shipping date, so they have nothing to report.

Alas, we need to delay delivery a bit to add a DRM feature since broadcasters are planning to encrypt some ATSC 3.0 broadcasts as early as this summer.

When we announced the Tablo ATSC 3.0 QUAD OTA DVR in January of this year, we felt confident that our stated spring 2022 delivery date was achievable. However, since that time, broadcast station ow...

I appreciate the response and totally understand the delay.

I would much rather have a fully functional device that is delayed than a device that would be limited in function. This is why I trusted Tablo in the first place when I pre-order this new DVR.

Since rabbitears seems to think there are already 3-4 atsc 3.0 channels that have drm encrption, wouldn’t it be nice to know who these ownership groups are and what channels they are are talking about. Isn’t there a requirement that any atsc 3.0 channel have atleast one unenrypted sub-channel.

The 4 drm channels are in a business relationship with evoca. Are these broadcasters expecting a hybrid broadcast broadband TV device?

The 4 drm channels are in a business relationship with evoca. Are these broadcasters expecting a hybrid broadcast broadband TV device?

We thought that Evoca and possibly some Pay-Per View stuff would be the only content that would be DRMed at least in the early days but that seems to be changing.

Not sure if any of the specifics are available publicly but we’ll try to share them if/when they are.

Thanks for the update. That explains a lot.

I have a question. And I think it may be at least partially answered here:

But that’s a lot of techno jargon and acronyms, so I thought I’d try here. When the news about the delay said this:

DRM decryption keys MUST be installed on the Tablo during manufacturing and cannot be added via later firmware updates.

I take it to mean that the keys must be stored in hardware. If so, why?

Having lived through the initial DRM problems with digital tuners for cable, there were many issues with the proper keys being installed on the hardware prior to shipping, so depending on the version you had, some of the channels couldn’t be tuned on the devices (Ceton tuners). HDHomerun worked for most of them…

Of course, this could be “version 2.0” of the same thing - and I applaud Tablo for taking the time to make sure they get it right. Nothing more frustrating that buying something you think will work, and then it doesn’t.

“Transport Protection provides protection against spoofing or hijacking the delivery of the data.”

Of course since it’s an HDMI model and one could expect some of those might not be connected to the ethernet, would it matter to them.

It is the 1% of the people, who try and distribute copyrighted material via many methods. And this is what makes it a real pain for all of us.

Some of the original members of the pearltv group wanted atsc 3.0 so as to supply programing in a different business model.

Other local broadcasters aren’t making enough or the same amount of money from mvpd carriage fees so they might want to find a way to make up for the lost revenue.

I think some of you might not have heard of a TiVo, the best feature filled DVR that only connects HDMI. People been using and buying them 20 plus years now, so there is a market for a direct HDMI connected DVR and these will sell well.

If your so worried about streaming, keep your old Tablo when you get this one. That is what I plan to do, use this same as my TiVo on my main TV and use my current Tablo Quad to stream with.

I’m just glad Tablo is taking their time to get this right. Apparently, many of the ATSC 3.0 tuners/devices out there already may become obsolete due to this issue… 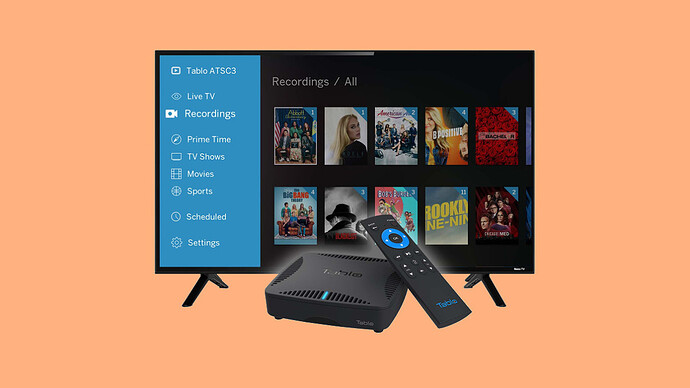 The first gen of ATSC 3.0 4K OTA devices might be downgraded soon

The new ATSC 3.0 standard brings 4K support to over-the-air TV in the US, but the first devices to support it might not last much longer.

This is why I am not an early adopter anymore. Being retired, I can’t afford to be buying things that quickly outlive their usefulness. I am willing to forego the shiny new thing and wait for the stolid, dependable item that is going last a long time.

I would be more concerned about DRM/encryption de-railing the entire idea. Still too many unknowns for Tablo to be able to answer all those questions with any sense of certainty.

And this is why I said the above back on January 5.

User: “Under law I can record OTA broadcasts! Yippee!”

The government (aka media producers forever stand-in): NO

You can read nickk’s response. And STB’s needing an internet connection.

Yow… I know nickk was trying to not come off as scary, but everything he said scares the pants off me.

My summary: Just accept it and be happy. (nickk approves of this message)

How can informing customers how ATSC 3.0 works and how their product works with ATSC 3.0 be considered as anything other then a positive.