There’s an update to the Tablo PREVIEW app for Amazon Fire TV & Android TV devices on the way.

This does fix the resume issue introduced in the last update and also provides all 14 days of data in the grid for those with active subscriptions.

If you’re currently using the ORIGINAL Tablo app on Amazon Fire TV or Android TV, please do give this version a try! 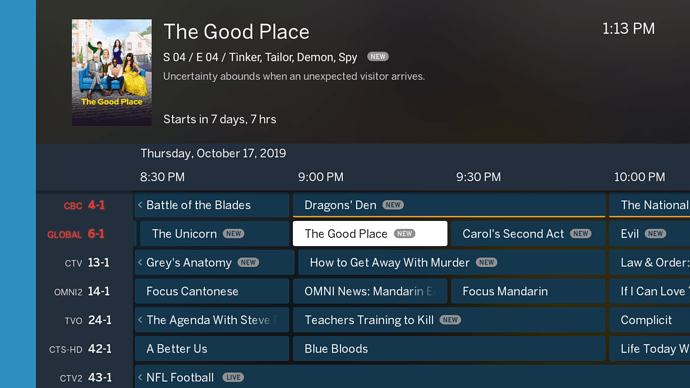 Unlike on Roku, the 14-day grid guide does not need to be turned off/on in settings. It has been totally re-architected and should be nice and smooth for folks using most Fire TV/Android TV devices.

If you have any questions, let us know below or send a note to our support team.

Maybe the 14-day grid should have been an option?

On a gen 2 Fire TV Stick with 21 channels it took over three minutes to fill all 14 days of the grid.

I’m glad I rarely use the grid or Fire TV Stick. But it was smooth sort of like watching dripping molasses.

should be nice and smooth for folks using most Fire TV/Android TV devices.

I think their most comment covers this. Looks like the gen 2 was released back in 2016 and I think we all understand that generally speaking the stick devices don’t have quite the performance of their “full form factor” counterparts.

I already have a 4K. But the specs on the gen 2 are more then enough to load a 14 day guide. It’s almost like saying the tablo android app should have poor performance on the 2015 nvidia shield because it was released in 2015. Of course it has no problem playing tablo video at 5 Mbps, slingtv, or even hdhomerun raw mpeg2.

But here are some numbers. On the original app for 21 channels if you immediately page to the end of 24 hours it takes 42-45 seconds to load data. V1.7.4 is 2 minutes 15 seconds.
You might also find that for 1.7.4 if you load all 14 days and then back arrow in the left menu you can’t move up or down until the data is freed.

In January 2019, the second-generation Fire TV Stick was re-issued with the updated remote from the 4K model.

I have a 2015 Shield TV and was going to be point out earlier it’s actually a good comparison because it’s OLDER than the gen 2 Fire TV stick but decided not to. Primarily because like I was trying to say, it’s a bit comparing apples to oranges comparing the gen2 FireTV and the Shield TV since the Shield TV is more powerful with the Tegra X1 and 3GB of RAM.

My test isn’t a direct compare to yours and I’m not sure how you immediately paged to the end of 24 hours, do you mean just arrowing over through the individual hours until you get to the current time on the next day or by arrowing over on the date to immediately jump to the next day? Having said that, I tested both scenarios I mentioned and for 10 channels it took just under 10 seconds to load data for the next day. It consistently took that time as I went several days in the future 1 day at a time. So to extrapolate to your 21 channels I would think if I had that many it would take no more than 20-25 seconds on my 2015 Shield TV.

This speaks to the fact the hardware in the Shield TV is simply allowing it to complete the process quicker, which falls right under the comment…

To page days you highlight the day(Wednesday 23,2019) and right button to the end. For hours you highlight the hours and right button to +24 hour mark. You can’t be slow poking along moving to your location you really want the Nov 5th grid data. And I haven’t played around with what happens if you move into an unfilled time area, etc. It does appear it might fill in some data in the background. But once you move off of Live TV and move back on I wouldn’t call it the speediest refill.

Unless you need to use Fire TV Stick 4k is there really much hardware difference between a gen 2 and 4K?

Maybe these are 1.7.4 features. Since it was broken I haven’t used the fire tv preview app in a while:

On a paused episode recording, for 1.7.4 the watch button doesn’t react to the remote’s pause/play only the Okay - okay on the OG app allows for play from the beginning/resume and the pause/play button is a resume.

While playing the recording the Pause/play brings up a timeline scrubber but doesn’t pause and you have to hit pause/play again to actually pause.

I’m using the 1st gen Fire TV box (not the Stick), and the 14 day guide loads slowly in Preview app. Any chance of having a similar on / off feature like the Roku app? The 1 day (24 hour) guide loaded a lot faster.

Next request, similar to the Roku app, can the FF and RW buttons on the Fire TV remote please be used to skip 4 rows/channels at a time in the guide / grid? Right now those 2 buttons do nothing in the live TV guide.

With new 14 day guide on the Roku, the left and right double arrows (<< or >>), go up and down by 4 channels on each click when on the channel names / call signs. I really like being able to do that. The Fire TV Preview app guide doesn’t do that.

While playing the recording the Pause/play brings up a timeline scrubber but doesn’t pause and you have to hit pause/play again to actually pause.

I’ve noticed this as well, but not every time. It seems to work fine at first, but after a few minutes exhibits this behavior. Which is frustrating because I can’t just work around the problem by always pressing the pause button twice, because sometimes it does actually pause the first time.

I also noticed the slight lag with stopping the 5.1 sound is back. Not anywhere near as bad as originally, but not as good as the previous version of the Preview app was.

I’m also not a fan of the differences in the Okay and pause/resume buttons. And the 14 day grid is painful. While I don’t usually use the grid I got a hint that one sub-channel was being switched out Oct 28th. I tried to use the preview app grid to see what tablo’s said. That was a mistake. But tablo was correct and titantv wrong.

I also posted in another thread about the resume video speed.

I don’t use my Fire Tv Sticks much. They are more of a backup for tablo app. So I didn’t measure the pre-v1.7.4 releases but resuming the same recording on Roku 3 - 10 seconds, Fire TV Stick OG app 10 seconds, Preview app 14 seconds.

Thank you for fixing the issue that progress was not being saved when watching a recording. Now, could you please address the new issue that several on this thread have noted? I am speaking of the problem using the pause button or the ff button to advance through commercials. You have to press it twice to get it to work. The first press brings up the line that shows how many minutes are left in the program but it does not pause until you hit it a second time—and you must hit it the second time BEFORE the line showing number of minutes left disappears. Also, the sound does not pause until a second or two after the picture. Thank you.

I am speaking of the problem using the pause button or the ff button to advance through commercials. You have to press it twice to get it to work.

Yes! I’ve passed this along to the dev team already. It seems to be a result of some changes that were made in one of the most recent Android OS updates.

We’ll definitely see if we can patch that up for the next release.

I keep having to restart the app every time I get out of it. When I try to open a channel is says weak signal until I restart the app, then it will work fine until I close it.

I am seeing 1.7.4 crash a lot when using the guide. If I move forward in a couple of days, and wait for the grid to fill, I can carefully move back, and the grid is still filled. But, if after moving forward a couple of days and waiting for the grid to fill, I the scroll down through the channels, to get to one of the last of 20 or so channels, they aren’t filled. Then they will fill if I wait, but if I then scroll up toward the top of the grid, several of the programs switch to grayed out, even though they were previously filled in with programs. Now if I try to scroll up to get out of the grayed out program, then Tablo Preview crashes back to my Amazon Fire Stick 4k. I tried clearing the cache of all the other apps I have loaded on the Fire Stick, and then cleared Tablo Preview’s cache, and tried again, but same result. I think 1.7.4 has a serious cache management problem.

The problem is that the app allows the user to move into a portion of the grid before it’s totally filled in.

I like to move into an unfilled portion and then click on a channels unpopulated area a couple of times and then use the back button. It typically pops the app back to the main menu and sometimes out of the app.