Hope you’re all having a great Monday!

If you use the native Tablo app for Apple TV, a new update is making its way through the app store. This update adds a settings screen as well as support for the brand new Apple TV 4K which was announced last week.

Now that we’ve got the settings screen tackled, we’ll now be able to focus on some of the critical recordings-related screens you’ve been asking for. 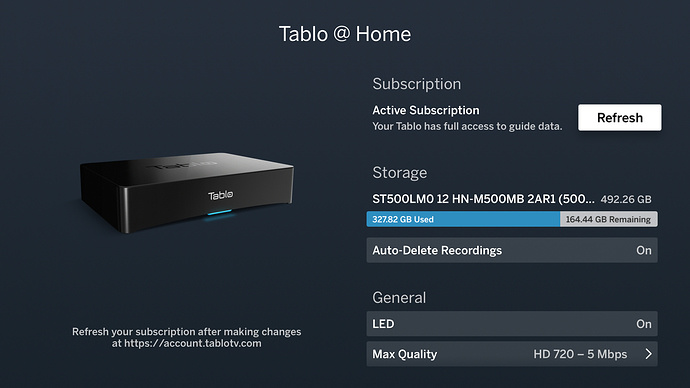 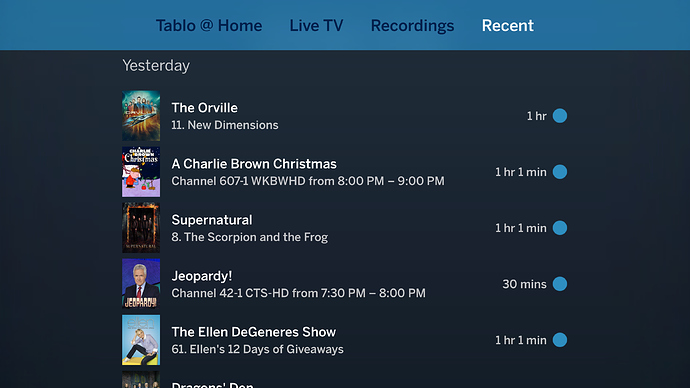 We’re workin’ on it! Now that we’re fully up to speed things are going to get MUCH more exciting over the next little while

I was hoping that this latest release would add the missing skip forward/backwards to my iOS app when watching recordings. Sadly there was no change. I’ve opened up a support ticket, but does anyone have any suggestions on what would cause that?

I don’t understand why we can’t get a sort option for Recordings! The server obviously has the API for retrieving the list sorted alphabetically or by date.

Alphabetical sort is never what I want! I want to see what’s new. I already know I have 74 episodes of America’s Test Kitchen.

I can understand not having the resources to rework the UI at the moment. Just put a toggle in Settings for now. Please! Come on, that would be so easy!

Thanks for the update!

Personally, the feature I’d like to see most is having shows, series, and recordings from my Tablo available in the ‘TV’ app: https://www.apple.com/ca/tv-app/

Personally, the feature I’d like to see most is having shows, series, and recordings from my Tablo available in the ‘TV’ app: https://www.apple.com/ca/tv-app/

That would be sweet, but alas integration access to that app is locked down by Apple at the moment and we haven’t been deemed ‘cool enough’ to get invited to the party.

Think a new haircut and some sweet running shoes might work to help us?

That would be sweet, but alas integration access to that app is locked down by Apple at the moment and we haven’t been deemed ‘cool enough’ to get invited to the party.

Think a new haircut and some sweet running shoes might work to help us?

Ah, I see. Yeah, they’re very measured in their approach. Right now they want to court the content providers, and not including other ‘over-the-top’ content such as Tablo is likely a part of the bargain they’re making with them.

I would hope they expand access over time. HomeKit, for example, also started out with a very restricted set of partners. But each year, they keep loosening up, bringing more partners into the fold, and being less restrictive with the API.

So maybe after Apple has all of the major providers on board, it can afford to open up access to that API. After all, the whole idea with the TV app is to be provider-agnostic, so I would assume that there isn’t anything about Tablo that is asymmetric to Apple’s long-term goals.

So yeah, I don’t think a new do and kicks will do anything. “It’s not you, it’s me” Apple would say. Besides, just be yourself!

So maybe after Apple has all of the major providers on board, it can afford to open up access to that API. After all, the whole idea with the TV app is to be provider-agnostic, so I would assume that there isn’t anything about Tablo that is asymmetric to Apple’s long-term goals.

The biggest problem integrating Apple’s TV app with Tablo is that the app is designed to get the content info from Apple’s servers, which gets it from the content provider’s servers. But the content server for the Tablo is the local box, and I’m not at all sure it’s possible for the TV app to get data that way.

Long time listener first time caller. Just updated to tvOS 11 and the new app. Notice there is an issue now scrubbing through (FF) with the preview. Used to be buttery smooth now it’s almost like has trouble loading the small preview thumbnail.

Restarted router and Tablo just to make sure no connectivity issues. That is the only thing that I have noticed in the new app and it’s a bummer because the scrubbing used to be so smooth on appletv.

I was so excited when I saw this update thinking we would finally get a “most recent” function for appletv (honestly that is the ONLY thing missing for me) but alas we shall wait. Please get the scrubbing with preview back to be smooth though.

Edit: Looks like it may not be a new app issue. Old recordings are fast forwarding and scrubbing without issue, its only things recorded in the last 2 days. For some reason a couple days ago new recordings started being split into two files and the first one although playable may be corrupted. I’ll have to put a call in to see what the issue is. Correlation not causation.

I’m currently using several Apple TV 4 units with the Tablo app, and the appearance of “new” recordings sometimes takes a while - up to a minute - especially when all older versions of the recordings (like news) have been deleted.

I’m assuming that the Tablo app is busy doing a lot of background housekeeping, and I’m wondering if the new Apple TV 4K, with it’s faster CPU, will help improve this problem.

No benchmarks yet because ours has not yet arrived at HQ!

So you have to be invited to be a part of the TV app? If/when they deem you guys cool enough is it as simple as flipping a switch or would that require a whole new update?

How do I delete the current “Tablo” app on my Apple TV ? I am assuming I can search for the new App, what is is called?
Also, twice in the last two days I have had to reboot everything to watch the Tablo, is this because of the updates?

Hold down the touch pad until the icon starts wiggling. Then hit the play button. Then hit delete.

thank you. is the new app be in the app store now? does it look different or should I look for a specific version?

It looks the same. The apple store only carries the newest version of apps. If you want to see if your Apple TV app is updated, just find it in the App Store on the Apple TV. If it needs updated it will say so where it usually says “Open.”

I have the same issue. No scrubbing previews, even after a recording has ended. Impacts both my Apple TV 4 and Apple TV 4K. Recordings prior to the latest app update don’t have this problem.

Same here having FF and REW issues as well as thumbnails not working properly. I typically have auto updates turned off but I obviously didn’t and now my appletv has tvOS 11. I’ll see if I can downgrade back up tvOS 10.

Same issue here with thumbnails no longer working. They seem to start out working, but them drop off about 5-10 minutes into playback.

The good news is the 10 second skip forward/back finally works without freezing. I’ve had this issue for over a year on Apple TV, and the folks at Tablo kept saying it had to be “network problems”. Yeah, it was my 1GB cat 6 wired network [eye roll]. Glad to have that working again. Just wish something else hadn’t broken in the process.