A Tablo app update is now available for those who use Amazon Fire TV or Android TV devices. This update includes a few bug fixes and some overall improvements.

If you have automatic updates enabled on your streaming device or Smart TV, you should see the update in the coming days.

REMINDER - Everyone should be using the app called Tablo (and not Tablo PREVIEW). All new active development is being done on the main Tablo app and Tablo PREVIEW has now been removed from the app store. 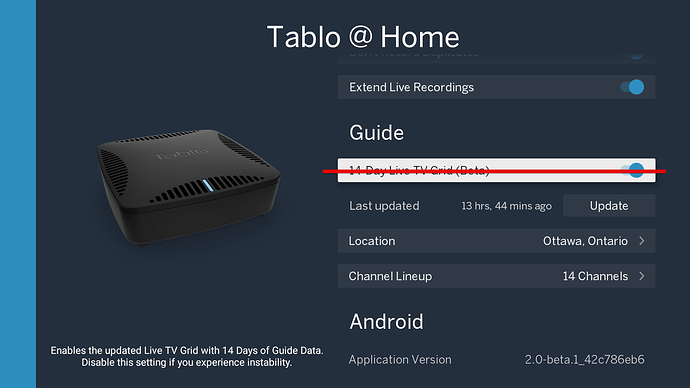 
About This Release
This release should be much more stable thanks to the overall performance improvements.

One of the other major changes is the removal of the toggle that allowed users to switch between the 14-day Live TV Grid and the 24 hour grid.

We have determined the 24 hour grid had been causing a number of problems so we have eliminated it in favor of the newer 14-day grid.

Customers without an active TV Guide Data Service subscription will still only see 24 hours of data in the Live TV grid, but the interface behind it will be using this newer implementation.


If you have any questions or encounter any problems, feel free to post them below or touch base directly with support.

As mentioned in a previous thread, sometimes the Tablo app simple won’t open without a force stop and cache clear.

But…I’m having a problem with really slow loading of the guide on two different Chromecasts with Google TV. This problem existed prior to the update, and I had switched to the 24 hour guide which offered slight improvement.

It opens at the current time with a few programs in the guide and the hash-marked areas slowly populate. Going forward just a few hours is all hash marks and slower to populate. Sometimes like 30-45 seconds, and sometimes the programs never fill in until you go ahead and back again, or up and down in the guide. (These are stations that have guide data and everything works fine on Roku, PC and Android phone.)

A minor annoyance, but it’s enough that I do my look ahead and see what to record in primetime on something other than the Chromecasts. The Chromecasts, Tablo app and everything are up to date. I’ve force stopped the Tablo app, cleared the cache, cleared the data and even reinstalled.

We don’t have to do anything for the app to update, right? it’s not like the Tablo’s firmware that needs an explicit update?

Correct. This is just an app update, not a Tablo firmware update.

I see similar performance issues sometimes and at this point I’m wondering how much of it is the Chromecast with Google TV hardware.

The hardware in it is getting a bit long in the tooth and if we are being honest, they should have never shipped it with just 8GB of storage. I’m not saying that’s directly related to the issues we are both seeing, but it makes me wonder.

Or maybe I’m just saying it out loud in hopes that Google releases a “Pro” version of the Chromecast with Google TV with at least more storage. I love the UI but getting the out of space message frequently is getting really old.

Hi folks - Several of you noted problems with using the Quick Channel Select option since the 2.2.0 update.

There is an update available now (2.2.1) that addresses this issue.