Trying to connect Tablo with new internet provider. Following setup get to password I’m getting incorrect password try again. Of course I’m using password that I used to connect tv, two Roku, iPhone, and harmony hub. I first pressed reset button, then unplugged for a bit. Everything seems to be going fine until I add the password? Any suggestions? Thanks

Do you have any special characters such as (’ : ? ! *) in your password? Another user seemed to have this problem and may have solved the problem by changing the password. Unfortunately, they didn’t respond if or how they solved their problem.

Hi! I’ve used my Tablo exclusively with Ethernet for 3+ years. I’m trying to test with a Wi-Fi connection to free up a port on my router. However, I’m having trouble connecting. I Disconnect the Tablo from inside my Android app, unplug the Ethernet from the Tablo, reboot it, then connect my phone to the Tablo_xxxx wireless network. I then use the App to add via Wi-Fi. It takes me to the step to pick my home network and enter the password. It tries to save the network credentials, but spins and …

No don’t have anything but letters and numbers. Using password on router.

Is it possible that your Tablo is trying to connect to a different wifi network such as a guest network?

I don’t think so. I’m in a rural area and jus became eligible for T-Mobile home Internet. I’ve used a cell phone hotspot for internet. Past few months I have been using a hotspot Alcatel Linkzone 2, and yesterday received the router from T-Mobile. I have two Rokus, LG tv, laptop, iPhone, and Harmony hub all connected. The T-Mobile router doesn’t seem to have some of the normal router settings. Don’t see any option for guests settings.

Sometimes you have to start at the begining… You sure it’s not still trying to connect to your old wifi? There’s a tech support page for changing WiFi networks.

If you have cleared the old wifi out, sometimes switches devices works, even though it shouldn’t make a difference.

Are you going from WiFi on the mobile hotspot to WiFi on the new modem? If yes, follow the link below.

Make sure that your Tablo is NOT connected via Ethernet before your follow the steps below. If it is, remove the Ethernet cable and reboot the Tablo by tapping the blue reset button on the back of ...

Is your password by chance shorter than the 8-character required minimum for WPA/WPA2 networks?

We I’ve got a glitch! Did the factory reset entered ssid, new password, hit summit and froze. The disconnected I was able to do. The next step is a bit confusing. I don’t get the edit button, this is what I get 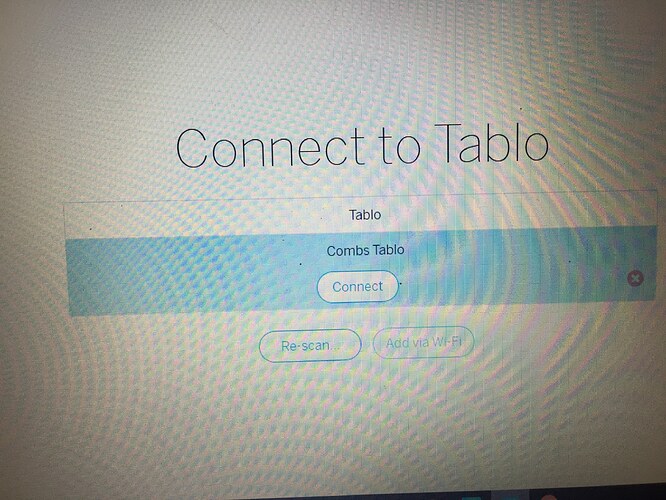 image3264×2448 3.49 MB
from that point until select home network. That is where I’m entering the password that I’ve used to connect all my other devices. Instead of connecting I’m getting incorrect password try again. I’ll try the factory reset again to see if I can change the ssid and password. Then I’ll let you know if it works!
theuser86 February 24, 2021, 9:18pm #11

I’ll try the factory reset again to see if I can change the ssid and password.

I assume you mean you’re factory resetting the modem? Not the Tablo?

Yes the T-Mobile router. I just did the factory reset. When I click submit I’m getting failed to reconnect network (update failed) that is to submit new ssid, password.

Just to confirm, your T-Mobile hotspot is turned off as its no longer in use?

If your Tablo is not connected with an Ethernet cable to your router, and it cannot connect to the new wireless network. It should be broadcasting its own WiFi network called “Tablo_XXXX”. Connect your computer or iPhone to that WiFi network then go to the Tablo app. Then go through the process of entering the new wireless network name and password.

Theuser86 that is what I did. I have tried several isp and never had any issues connection the Tablo. Only this time it looked like everything was fine. When I entered the password and I got the incorrect password try again. Being a new password with letters and numbers, I thought I had just entered it incorrect. Do I did it again. I can hookup the GL.iNet router with Ethernet cable and get it to connect with the Tablo.

Very weird. Can you just hard wire your Tablo to the new T-mobile modem instead of using WiFi?

Why didn’t I think of that. Fixed! Thanks

Now the real question is with the Tablo hard wired to your new T-mobile modem, did you get the port forwarding setup so Tablo Connect works?

Unfortunately no! Apparently no configuration can be preformed on that device. It’s very limited access. But saving over five hundred a year. I can and have survived without port forward. I actually only wanted to setup port forward for my son. He probably wouldn’t use it anyway. With great internet I probably won’t be using the Tablo much either. I have YouTube tv and if T-MOBILE was available on Roku I would have it instead. Don’t know if you are are aware T-Mobile has phone service for over 55 . So for 150 you can have two phones, internet, and tv.