Hi everyone! A new update is on the way for Tablo’s Apple TV app. Your Apple TV should update automatically in the coming day or so, but you can check the Apple App store for the update now if you’re antsy. Here’s what you can expect… Tablo Apple TV App Update (v. 1.8.0) Adds support for manual recordings Adds improved error messages Bug fixes & performance improvements [tablo_appletv_manual_program] If you have any questions or feedback about this update, don’t hesitate to drop…

I just downloaded the latest Fire TV app (not preview) and think I have found a bug. While recording a show with the keep 1 last episode setting, the antenna cut out and split the show into two recordings, then the app deleted the first half of the show. This did not happen with the Tablo Preview App for Fire TV.

This would be a firmware issue, not the Fire TV app.

The app doesn’t do the clean up of recordings.

I’m not real happy with some of the features that were removed from the original app on Fire TV. Lost the capability to always have it start up in the recording tab. The display of the recorded shows I don’t care for, but ‘hopefully’ I will get used to that change.

And another thing that seemed to occur at the same time so don’t know if it was a firmware update, but almost all of my recordings that were set to record ‘new’ shows are not recording them. I’ve had to go back and manually record shows that are marked ‘new’ but are not being flagged to be recorded.

There was a short Tablo outage last weekend…

Similar here. I keep getting that “problem establishing and authentication session” thing (using Chrome and Firefox on Win7). But Tablo works fine on all my Roku Ultras.

That’s likely the cause of your recording schedule issues, not a firmware or app update.

I thought that this was just the Preview app re-branded, but it is clearly different. Or new bugs have been added.

When I hit pause (Fire TV), the video stops immediately, but the sound (5.1) continues for about 2 seconds. Which is bad enough, and one of the reasons I switched to the preview app a while ago. But now when I un-pause, the video skips ahead the amount that the sound played, so I miss the video for that couple of seconds.

I really hope Tablo fixes these audio/video sync issues with this “new and improved” app, or keeps the “Preview” version around for years to come.

I’m using the Android TV app on a Shield TV not a Fire TV so maybe things are different between the two apps but you are saying under Recordings you don’t see filters like All and Recent? I see both and they both work as expected. All is the alphabetical order while Recent is in reverse chronological order.

So, if you record a lot of weekly shows. The recordings could be towards the bottom of the list/screen if you start watching at a certain date. In the old app, it was almost always somewhere on 1 screen.

That does make sense, seems like there must be a difference in the way the Fire TV UI organizes things vs the Android TV UI.

I have multiple tablos and have never used or had a desire to use remote connect. I find it strange that on all of my units, I find that in the settings menu, my device is paired and set to full quality. Who am I paired with and why should it be if the remote connect option isn’t turned on?

I find it strange that on all of my units, I find that in the settings menu, my device is paired and set to full quality. Who am I paired with and why should it be if the remote connect option isn’t turned on?

Yes, I can see how this might be a bit confusing.

Even though you don’t have Tablo Connect enabled, the fact that you’ve connected to each Tablo while you’re on its home network has set pairing data for that Fire TV device.

If at some time in the future you enable Tablo Connect, that Fire TV device would be ready to use remotely.

We’re hoping to make the settings around this feature a bit clearer as we move forward.

I guess not wanting to have any of my own devices as well as any device of a visitor paired seems to be an elusive concept.

seems like there must be a difference in the way the Fire TV UI organizes things vs the Android TV UI.

They’re both exactly the same.

RECORDINGS ALL is by series sorted alphabetically… you can use the alphabetical menu on the far right to jump quickly through longer lists. 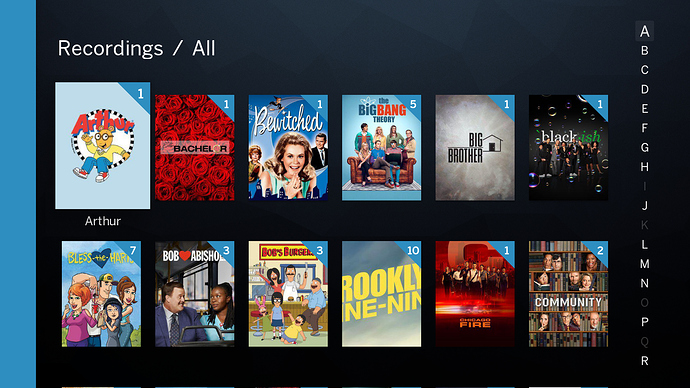 RECORDINGS RECENT is sorted by date and shown by individual airing vs. by series: 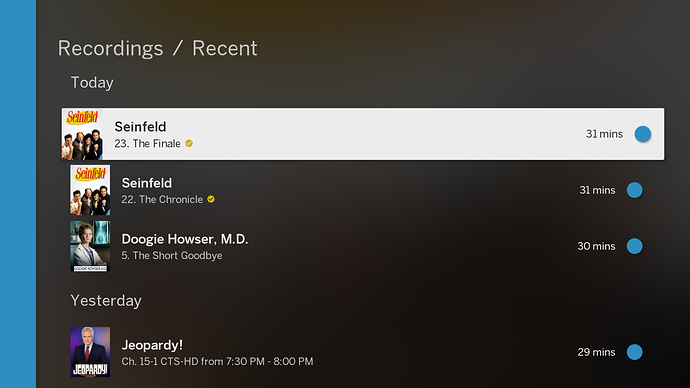 You can start playback from either of these screens by highlighting the series or show and selecting PLAY vs. OK/ENTER.

I guess not wanting to have any of my own devices as well as any device of a visitor paired seems to be an elusive concept.

Nothing has changed with the implementation of Tablo Connect despite the new details in the settings area. In order to access your Tablo any user would need to have your network password and connect to your Tablo on its home network. If you don’t have Tablo Connect enabled, any person who had previously accessed your Tablo would not be able to connect to it remotely despite pairing data being stored.

That being said, in addition to providing additional clarity in the settings screen we want to add additional functionality including the ability to revoke pairing on specific devices for those that have this feature enabled.

It really isn’t tremendously useful to have the day/date listed on a vertical scroll on the main Most Recent screen … either format it’s all still in date order either way. Similarly, knowing that the program was 30 or 60 minutes (or whatever) long isn’t of key value (even if very rarely useful to know how long a playback would be … most times you know what the length of what you recorded is; it could in any case if wished be super-imposed on the tile); true of the channel and exact time too. All of this is usefully available in the web app when one clicks a layer or two down, if occasionally desired, and that’s fine.

Furthermore the smaller tiles in the vertical scroll are less distinctive/readable in a lean-back mode if viewed, say, on a projector or large-screen monitor from a distance, and the Firestick is more likely to be used in that way than the web app, so the two different formats seem almost flipped in utility.

Everyone has their own preferences for UI and UX, but for whatever little it is worth as a UX designer off and on for decades and a Tablo user going on five years, I much prefer the suggested format of the web app to this Firestick and Roku approach. This seems to me a degradation of the UI, not an improvement. (I am sure there are at least some who, fair enough, disagree.) I fear Tablo will report that they will be changing the web app to follow the Firestick/Roku approach for consistency, hope not.

In Settings , I see that the guide was updated more than 24 hours ago.

The Scheduled Coming Soon screen shows the header Today three times! And the Recorded recent does not show what was recorded yesterday. I tried to update the Guide Data but it just keeps spinning.

A solution is probably to unistall and re-install the app! But that is not normal. What about reloading Microsoft Word every day?

That long standing problem should be corrected!

The Scheduled Coming Soon screen shows the header Today three times! And the Recorded recent does not show what was recorded yesterday. I tried to update the Guide Data but it just keeps spinning.

This is quite odd.

Do you turn your router or Tablo off in the evenings?

Would you be able to share a picture or video of of the issues you’re seeing with the scheduled or recordings screen with the support team? www.tablotv.com/ask-tablo/

It is possible that deleting & re-adding the app could help, but if this is occurring frequently as you mentioned it deserves a closer look.