Is Tablo working on a solution to integrate multiple tablo’s so that the user does not have to switch back and forth between tablos? A single screen for all the recordings, scheduling, etc. would be nice as more and more people are getting multiple tablos.

Since I am asking for new features, might as well add the another request. How about having more than one RG6 port/jack for the QUAD? A lot of people have more than one antenna and finding a combiner to connect them is a pain. A dual port/jack for multiple antenna’s would solve a myriad of problems.

Just some suggestions. If any of these features are coming out, I would love to know.

Since I am asking for new features, might as well add the another request. How about having more than one RG6 port/jack for the QUAD? A lot of people have more than one antenna and finding a combiner to connect them is a pain. A dual port/jack for multiple antenna’s would solve a myriad of problems.

This is a “nice to have” feature that is probably not envisioned for the average consumer of the product. Adding a combiner to the unit would increase production cost and price for an already expensive item.

A dual port/jack for multiple antenna’s would solve a myriad of problems.

What myriad of problems? Winegard combiner is $19.99 at Solid Signal. And $22 on Amazon, that’s not a pain to find at all. See all 3 links below for aid. 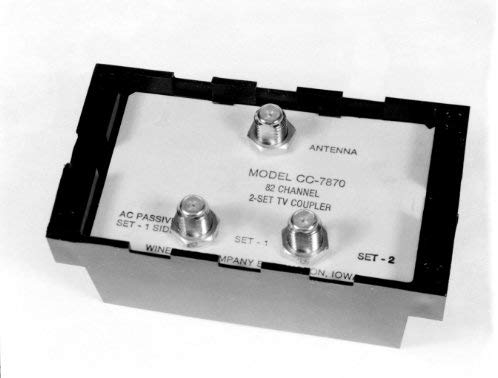 Is Tablo working on a solution to integrate multiple tablo’s so that the user does not have to switch back and forth between tablos?

I would seriously doubt it. The software is designed to treat each Tablo as an independent media server.

Along the same line, a feature to add the live channel guide from Tablo with other services like Philo, Pluto, etc would be nice.

Why? The Tablo can’t use those other services, and the Tablo isn’t a big enough product to get integrated with those services.

A dual port/jack for multiple antenna’s would solve a myriad of problems.

What myriad of problems? Winegard combiner is $19.99 at Solid Signal. And $22 on Amazon, that’s not a pain to find at all. See all 3 links below for aid.

Also, there are kits online that include all the parts. For example:

Thank you for the suggestions. I initially used Dish’s antenna installation service. They installed a Televes antenna, which works great in getting the signals from the directions it is pointed at. I only get Fox and NBC however. I purchased a Winegard Elite 7550, which also does a good job in getting signals from a different directions. It strange, however, that when I switch them, they don’t perform as well. Each antenna has its own preamp. Anyways, the Winegard Elite gets CBS, CW and PBS for me. No ABC signals (VHF 7) at my location due to hilly terrain. I have tried the Winegard, Jointenna, Stellar Labs, and almost a dozen other combiners. No luck. As I read the various blogs online, combining antenna signals is a hit or miss. In my case, it is a miss.

Yes, there are factors that make it work better or not…
This guy has some good points:

I would almost certainly pick-up a Tablo Dual after I get a Tablo Quad if there was an integration that made them function as one unit (i.e. didn’t have to switch back and forth). Having a couple of extra tuners available for outside streaming, recording extra shows, adding the preview thumbnails, etc. would be great.

I know some users appreciate the ability to keep them separate, I think a menu selection to ‘merge’ the two units could facilitate keeping them separate or having them act together in unison.

While I understand several people that are very active on the forums have multiple units, I would be curious how many Tablo customers overall have multiple units. That might drive the priority as to whether something that would probably take a decent amount of development has a high enough ROR to have it high up on the list at this point.

I have three tablo units.

But I come the baby boomer generation. I was taught that when I get up in the morning I need to put on my big boy pants and get on with life. If having total integration of my tablo units is the most seriously issue interfering with my life, my life must be pretty good.

@Nilex I can live without the feature, it certainly would be much lower on my list than several others (i.e. series priority). However, current ownership of multiple Tablo units would have very little correlation to implementation of this feature in my opinion. I for one would not purchase a 2nd Tablo unless this feature was implemented. I’m sure there are many others out there like me. Those who purchased 2nd units did so for other reasons. This feature didn’t factor into that decision. I guess my point is, the number of current multiple unit users has no bearing on the potential number of users who would find this feature beneficial.

I get what you are saying, I consider myself a “heavy recorder” and through all my TiVo years and now Tablo never have had need for more than 4 tuners. I’m just curious what the % would be of Tablo owners who actually need more than 4 tuners.

I live on the West coast.

At the start of the college football season it’s 16 games on Saturday. Starts at 9AM PDT and ends around 10:30PM. So that is more then 4 tuners just for football and not what others want to record or the October MLB playoffs. I may record them all, I don’t have enough cycles to watch them all.

I have the 1st 2-tuner model and the Dual Lite. Some level of integration would be nice, however, there are advantages to having them separate. I have my Dual Lite set to record at 5 Mbps bitrate and the other to record at 3 Mbps. Another advantage that I don’t care much about but others enjoy is having separate progress/watched statuses.

So other people don’t mark shows watched that you haven’t yet, so frustrating! Lol

For $99 dollars and the cost of a USB drive your problem is solved. With all the feature requests over the last 90 days, you will probably be dead before profiles or multi-tablo integration make an appearance.

@zippy You’re probably right. Not being a Table engineer though, I have no idea how much effort multi-Tablo integration or profiles would take. Not all features are going to be hard/time consuming to integrate.

I spent 45 years as a senior system analysis in R&D for multiple major companies. - operating systems, middleware, databases. Changes aren’t cheap and have to not only fit into existing memory but also not impact performance. And the original tablo didn’t use the fastest CPU in the world.

How many features have been proposed in just the last 90 days? Nuvyyo is a small VC company and funding for VC companies ain’t easy to get without giving up a lot.

Unfortunately there are no $99 sales on Tablo in Canada, just unfair!

And no friends south of the border willing to buy one for you and smuggle it into Canada.