One follow on note as I saw a recent comment regarding scheduled shows becoming unscheduled after a rescan. This also happened to me too so please check your scheduled shows are correct. Some of them look right on the surface but the episodes airing today and tomorrow were unscheduled but subsequent airings were fine.

I actually encountered the very problem you predicted. Recent, Sunday news shows were not correctly rescheduled.

The major reason I bought my second and third Tablos was specifically to provide enough redundancy that I would not miss favorite broadcasts. This morning and early afternoon, my other older 4 tuner recorder came to the rescue and recorded all my shows.

I have the same Poster problem that OP posted. Here’s the details:

Original 4 Tuner Tablo running 2.2.34 firmware. The poster problem started for me before the 2.2.32 firmware was installed.

Just replaced a WD USB Powered 4TB drive with a new Seagate 4TB drive with an AC Adapter. To replace the drive, I deleted all programs from the Tablo, swapped drives, had the Tablo format the drive and went on. All schedules that existed before the swap still exist and are working fine. This did not affect the Poster problem either better or worse.

As you can see some posters are cut off as if they are actually a wide format poster. Others are ‘generic’ blue posters with the text of the name. 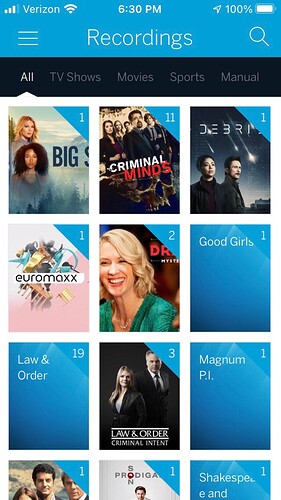 The Roku client shows the same.

The problem affects all Posters in the Tablo (PrimeTime, TV Shows, etc.) Movies seems less affected. Many movie posters look cropped so items on the edges are cut off. So the problem is consistent and has been for months. In fact it seems to be getting worse as some posters that were correct have been replaced with incorrect posters or the ‘generic’ ones.

EPG updates appear to work correctly every night as they should. Recordings are happening as scheduled.

I can verify that the “Optimizing Guide” procedure is happening about 3:30am-ish every day as well.

I can’t do the blue button reboot suggested above at this time as it is recording. But since this problem has started, I have had the unit powered off at least two times. And I have performed a full scan to add a new channel in the area.

Don’t know what else to try but willing to entertain suggestions! Thanks! - Chris

I have spent many hours screwing around with this, and have exactly the same messed up icons as you do, after many months since I originally started this thread in February.

I have multiple players including many Rokus, Apple TV’s, iOS devices, Nexus players, and recently added an Amazon Fire Cube. Each and every player shows the same messed up icons.

And I have come to accept the fact that this is a temperamental and, in my personal opinion, overly complex product which will never work totally. It is, however, a wonderful product nonetheless, supported by an exceptionally helpful and dedicated group of great people, trying hard to make things right.

In the course of my earlier complaints, which were posted in literally hundreds of posts in this forum, a significant number of inexperienced fanboys wasted a great deal of my time trolling and disputing whether my complaints were legitimate, most often using the specious argument that the problem could not exist since they were not experiencing it. Having three Tablo units online here simultaneously with every available player makes it abundantly clear that these problems are very often dependent upon specific user configurations. As a retired engineer, I sympathize with those who need to debug these problems. The sheer number and complexity of supported players and Tablo models makes it very difficult.
So does the variety of disk drives, routers, OTA environments, etc.

So, this particular problem remains puzzling. I find it also intriguing that the very same show, recorded at the very same time on the very same channel, may have different icons depending upon which of my three units is used for recording. Good Morning America, for example, a daily news show I have been recording/watching for years, has one icon poster on my 4 tuner unit with an entirely different one on my new quad recorder.

I hope somebody figures out why you and I and others are missing desktop icons. For the time being, I am willing to ignore this and other Tablo issues since they do not prevent me from using the equipment as originally intended.

Pretty sure it’s related to this item in the 2.2.32 firmware update…

It would seem whatever change was coming back in February isn’t fully implemented still or something is out of sync in what the guide provider is providing vs how the Tablo is formatting it now.

There is some more info here about some of these issues. Long story short is that hopes are for some of it to be corrected in the next firmware update.

Artwork is off center or cut off, title omitted General Discussion

Any update on this? It seems most streaming providers display images in landscape mode with horizontal sides longer than vertical. Perhaps Tablo needs to change?

It is altogether possible that this poster issue is entirely beyond the control of Tablo. The provider of the EPG may be totally responsible.

Not a big deal, but for those of us older folks with poor vision, it makes icon recognition way more difficult. The graphics are easy to recognize whereas the small text is not.

I actually bought the Amazon Cube since it permits voice announcement of each recorded title, given that the new quad Tablo server icons were mostly text only. For a mere $100, it provides me with a good work-around.

It is altogether possible that this poster issue is entirely beyond the control of Tablo. The provider of the EPG may be totally responsible.

In the thread linked by smess just above, you’ll find this from Tablo TV:

The test data we were given was sorted by size but the actual data being provided since the switchover isn’t. This lack of sorting means that sometimes the incorrect aspect ratio image is used. The plan is to add sorting logic to the next firmware update.

One more data point. On my two 2 tuner units I saw different behavior. The tuner that had many recordings & schedules of both active and inactive series had more missing program icons than the tuner without any recorded or scheduled programs. I removed my scheduled shows and old recorded series that had blank icons and am now at about 3 missing icons out of ~220 shows with my 3 PBS stations.

I agree with the previous posting on having to give up on perfection when it comes to the Tablo eco system, especially with this fee based artwork. My tuner that had the most issues was seasonally offline for over 6 months, so the firmware update probably occurred on an out-of-date guide database as well.

The apps and user experience are better if you can minimize the number of channels and scheduled programs. Displaying cached program textual titles immediately and then letting us scroll rapidly through the text would be a better browsing experience than the current… wait for it… there is the icon now experience.

The experience is improved on my Roku 4K Stick+ vs. earlier FireTV stick, but I still need to move over to the A-Z column… nope, no “find This Old House” on the voice controlled Roku!

What’s a bit frustrating here is that the “beautiful cover art” is something that I am supposedly paying for with the guide subscription. I hope it can be resolved, but at least functionality has remained in place.

Are you referring to the cover art being cut off or entirely missing? If the former, it’s directly related to the guide provider changes I linked above and is a temporary issue.

Both I think. I’ve noticed the offset nature of lots of the artwork, as well as mainstream shows that previously had artwork now just showing text. Yes- I’m eager for the next firmware update that will purportedly fix this. Thanks!

If the former, it’s directly related to the guide provider changes I linked above and is a temporary issue.

I get the whole thing… but temporary?.

That announcement was in February, they said they were misinformed. Several months later, they still don’t know the new dimensions? The resolutions of the graphics our tables display, which they store?

Tablo has a history of posts stating it’s in the works dating back years. This will hopefully get sooner attention. If there were some information, beyond on the road map…

Yes, temporary, “lasting for only a limited period of time; not permanent.”

Indefinitely Temporary - limited period of time, although not permanent …continues without ending; until someone decides to change it.

Bumping this to keep it active.

I’m very surprised that Tablo hasn’t fixed this ASAP as it’s really detrimental to the impression of the product. I was told in an e-mail that it would be fixed in an update but there was no timeline for the fix.

I was told in an e-mail that it would be fixed in an update but there was no timeline for the fix.

The fix will be in the next firmware update which is in beta testing at the moment.

Good news! Thanks for the update. Looking forward to it.