Lost signal for all channels out of the blue - need help

You can still watch completed recordings?

Unless it’s recording “no tuner available”

along with never being able to tune any channel ever

while your antenna works just fine connected to a TV

The coax connector on the Tablo has a wire that connects the center conductor to the PCB. If you over tighten the coax cable you could twist the connector enough to break the wire. The result is tuner gets no or a very weak signal while existing recordings are fine. If you have a multimeter and are not afraid to take the tablo apart you can check the continuity from the center conductor of a cable to the PCB. If it is broken it is repairable if you have a soldering iron.

If it is broken it is repairable if you have a soldering iron.

Hope the OP lives close to you lol

There is an existing topic on this subject.

thanks everyone, you are all awesome. Still having problems. I didn’t crack open the box, but I did confirm the signal works fine using the same coax cable. Recordings work. Error messages have included everything from weak signal, no storage, and now no tuner. I have reset, uninstalled, reinstalled everything I can. I have contacted tablo and they are now doing some remote testing. I’ll post the resolution once I have it. Thanks again.

Same issue here with old Tablo Quad and now a brand-new Tablo Quad. No signal / weak signal issues start around midnight when maintenance mode starts. After that, the only way to regain signal is to reboot the Tablo. I filed a support ticket today about this.
I did see a similar thread where the original poster solved the issue by checking the box in settings to “auto delete recordings.” I had unchecked that several years ago. Just toggled it back on this morning after power-cycling the Tablo again to regain signal.
I had already done fsck to check the WD Elements 6TB hard drive before installing the new Quad – it checked out fine connected to my linux system. Additional checks include rescan of all channels, reboot without hard drive connected, etc. OTA signal is fine, lots of channels until maintenance mode starts, then nothing. Firmware is 2.3.30. Will reply again if / when resolved.

Your issue is different. The OP has weak signal all the time on the Tablo, reboots do not fix it.

Thanks @theuser86, point taken with the OP having no signal all the time, whereas reboots temporarily fix my issue. Sorry.

Same issue here with old Tablo Quad and now a brand-new Tablo Quad. No signal / weak signal issues start around midnight when maintenance mode starts. After that, the only way to regain signal is to reboot the Tablo. I filed a support ticket today about this.

Although there is no set time for maintenance mode, it’s generally later/earlier in the AM

What is maintenance mode?

During the early hours of local time,(3:00 AM+) the Tablo will enter a temporary ‘maintenance mode’

This is unlikely and very rare. Lightening hit the power transformer on the utility pole, little to no impact… later realized “things” with wiring on the front outside had been impacted. I have low voltage landscape light. When the transformer came on at dusk, the TV and tablo at the far end of the house would loose one channel. The cables run together over the patio. It wasn’t until the sun started setting earlier did I finally decide to dig dipper (it didn’t happen right when it was on).

So if it’s kind of like a “scheduled” outage - not really random. Something is turning off or on, either power or on your network? Of course it’s noting obvious.

lots of channels until maintenance mode starts, then nothing.

From above article noting maintenance mode -

During this time, the Tablo’s blue LED will flash slowly, roughly once per second.

This is the same as rebooting, second phase, so unless you were looking and saw when it started, know there was not a rapid flash… it’s possible it may have been booting?
Tablo LED Status - What Do the Blinks Mean?
…sadly, maintenance mode isn’t even listed as a reason for LED activity, as to what it may mean

@ djk44883
The “around/after midnight” is a generalization of the time, I can only say between midnight and 7AM as far as when the issue occurs and that is the same window as the Tablo maintenance mode – I have not been up to note the led flashing, but I have seen it in years past during very late nights / very early AM.

No power or network issues. I have extensive 24 hour power monitoring due to onsite solar production and no issues there – not even a voltage sag. Nothing logged in the syslog of the load balancing router, and no issues on local servers running. As mentioned the issue was happening with a 3 year old Tablo Quad and now with a brand-new Quad with the better ventilation. Both units are on top of a laptop cooling pad. 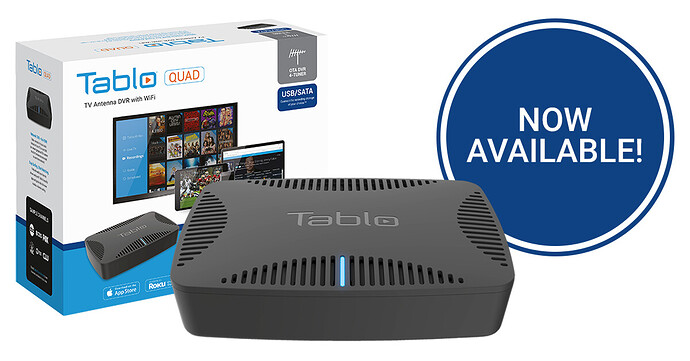 your process of elimination, “as far as I know” ?

with that I’ll let it be.

I was finally able to fix my issue with the Tablo’s tuners hanging up during the nightly maintenance mode. I have not received a response from the support ticket filed 12/29/20, but it is the holidays. Just happy to have it working.
I resolved the issue was resolved by doing (on Ubuntu linux) a e2fsck, followed by doing an integrity check of the Tablo.db, then an e4defrag of the drive. After three years of recordings the drive showed 40 percent non-contiguous files. If there is any interest I can start another thread with my full process to fix the drive.

The /DB on the drive is used if/when you migrate to another tablo. It’s only read by a tablo that’s fresh-out-of-the-box or been factory reset.

Yes, and I had made sure it was current by hitting the reset button once. And, given the integrity check showed no errors, it must have been an external hard drive issue that was resolved with the disk utilities.

Our team has received and responded to your request - thanks for reaching out, we’ll get this fixed up.

I seem to be having the same problem with my Tablo. I thought I had resolved this by removing the antenna amplifier, thinking it was causing the problem. Now it has been down for 2 or 3 days and rebooting the Tablo has not helped. I have unplugged it now and will let it cool down although it does not seem warm to the touch. plugging the antenna directly into a t.v. shows full channels with no pixelating.
let me know if yours got resolved. I will have to put in a trouble shooting request, this is not the first time with this issue.