Any updates on this? I just noticed this issue on my ipad Tablo app. The time displays fine on my Fire TV Tablo app, but it’s wrong on my ipad. Recordings have been working ok even though they display the wrong time on the schedule.

Just wanted to mention that the time displayed on the live tv schedule is NOT the only issue. As you can see on this screenshot, I have The Rookie scheduled to record from 9 to 10pm because that is when it airs. But the two scheduled showings display a recording time of 8 to 9pm. The end result is that it records at the right time because it THINKS it’s 8pm when it is actually 9pm. But if I want to set up a new manual recording I’m not sure what would happen. Just wanted to make sure you were aware of this. This is on my ipad. Thanks . 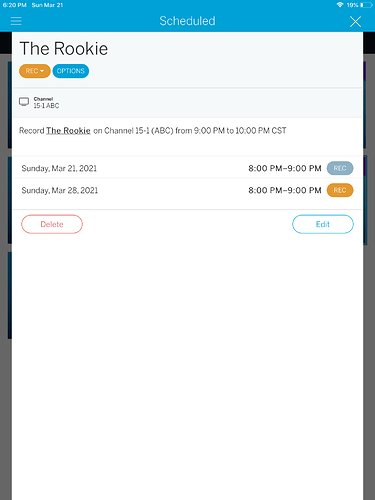 It does say CST on the schedule.

Any updates on this?

Yep. We have a fix in beta at the moment that seems to correct the issue for all of the affected apps.

We’re hoping to begin rolling it out soon.

FYI - The staged rollout of the fix (via a firmware update) has now started:

Hi there Tablo family! A new Tablo firmware update is on the way for network-connected Tablo DVRs (this excludes the Tablo DUAL HDMI and Tablo QUAD HDMI). This is a maintenance release with a single hotfix for the Daylight Saving Time issue experienced by a subset of Tablo apps. Like all Tablo firmware updates, this is being distributed in a staged rollout over the next week. A small number of customers will receive the update today, with more added to the rollout every weekday. When your DV…

I just updated and everything so far looks good. The time is now correct via IOS and on my Android tablet. Roku and Chrome on Windows 10 are still correct.