The app on my iPad 2 would not finish syncing so I thought I would re install the app. It tells me it is not compatible with this iPad any longer and will not allow me to download. Running the last and latest version iOS 9.3.5 I will be very disappointed if I can no longer use this iPad to stream my tablo content. Please advise.

Welcome to very sad - me too!

Have you tried the web app in Safari?

The web app only gives me a white screen with the address in the browser bar. 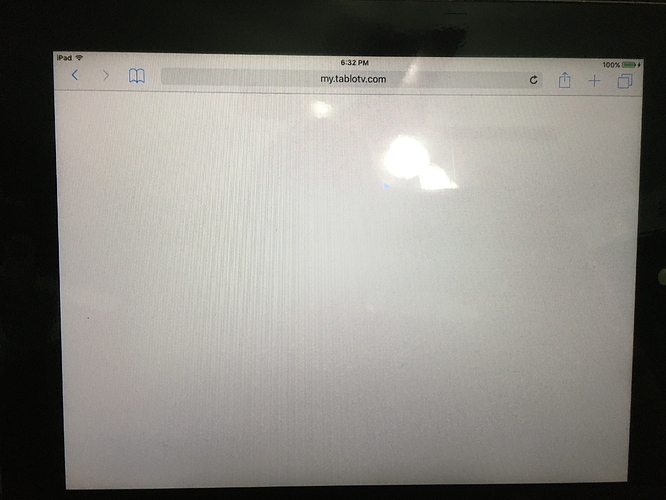 OK, I checked mine and the software version is 10.3.3 and it will NOT udate from there. Thanks for suggesting my.tablo on safari. Tried it and it also does not work. Strangely it will record a show but not play anything - with or without SS on. I give up.

Yep, it’s dead. If “the” tablet is important, time to shell out $800 for another few years of tablet goodness… which is to say… don’t do it again (IMHO).

The browser white screen of death.

The April my.tablotv.com update resulted in the white screen of death on two of my older PC browsers.

The forum Discourse update within the last 30+ days white screened the forum on one of my PC browsers.

So you are not alone.

No, I don’t buy Apple anymore, did for years, but then I built 3 hackintoshs for about 1/3 the price and now I work at 4.5 Ghz for $900. Guess I will have to live without Ipad Tablo. btw the cheapest new ipad is 799 if you want some memory and size you are spending close to 1K. Cheers

Go to play store and on bottom tap purchased. On top tap not on this iPad. Now look for the app.

@sodaman_2000 @Spiderterp As noted in our last app update, the new minimum iOS version we can support with the Tablo app is iOS 12…

Hi everyone - With the launch of iOS 13 scheduled for later this week, we’ve just pushed an update to the Tablo app for iPhones. The Tablo iPad app will also be getting an update shortly is on the way now! It’s worth noting that the new minimum iOS version for Tablo apps going forward will be iOS 12. More on that below. Here’s what you can expect: Tablo iOS App Update (v. 1.8.0) Adds support for iOS 13 Adds updated player including 30 sec. skip and 20 sec. rewind to iPhone Adds improv…

However, Safari should indeed work…

We just tested my.tablotv.com in Safari here on iOS 10.3.3 and were able to connect and play content back.

Are you folks at home when you’re trying this? Or away?

Do you have any browser extensions enabled? If so, can you try a private browsing window?

white screen of death on two of my older PC browsers.

is this older PC problem, or does the age include browsers which have reached EOL support?

I have an anchient PC still capable of playing my table content on occasion.

We dug out an old iPad2 using the same OS and alas got the same result. We’ll see what we can do to restore functionality the web side of things.

This is normally not an OS release level issue. It’s a browser version issue.

As the OS version becomes frozen often the browser versions soon become frozen. And it often doesn’t have anything to do with the capabilities of the browser but strictly it’s actual version number.

So you could have an older browser version that is HTML5 compliant but it starts to fail due to checks on the server side.

So now I have one browser that can see the forum if javascript is disabled and a different browser with full capabilities. Of course neither work with my.tablotv.com. Of course these didn’t undergo de-evolution like the amazon v1.7.2 app.

Thank you! I will keep an eye out. To at least be able to stream via the web would be fantastic.

Thanks for the response. I must have an ipad 3 because it is maxed out on 10.3.3

Thanks for checking in on this and seeing if you can help. Not a big, big deal - but would be nice to have sometimes.

Do you mean that the Tablo IOS app doesn’t work on the 4K Fire TV Stick?

Or are you talking about the original fire or the new v1.7.4 Fire TV stick app?

That’s a pretty generic comment to make based on there potentially being a problem with one specific playback device and no specifics as to the issue you are having so that maybe others can assist or provide suggestions.

I suggest you start a new thread regarding your fire stick. This thread is for iOs.