Guitars By The Pound

Way off topic. Pulled a pile of guitars out of deep freeze today. I’m a bit on the obsessed side when it comes to music & studio equipment, and they tend to pile up. This is a mixture of acoustic & electric, six & twelve-string. Taking this batch down to the Hawthorne district tomorrow to sell. 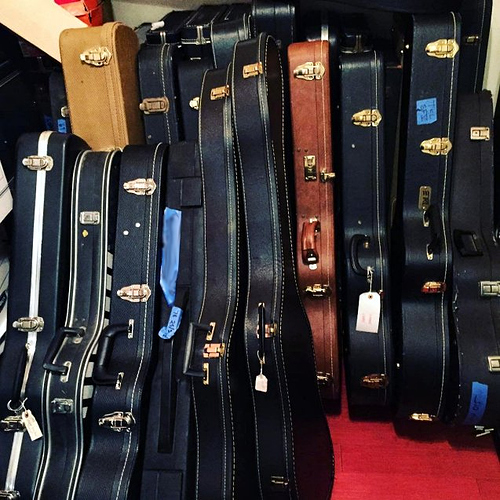 It’s difficult to part with guitars and other string instruments, even those you don’t get around to very often. Only way to do it is to load them up and move them out. Might even sell this batch by the pound.

This is a mixture of acoustic & electric, six & twelve-string. Taking this batch down to the Hawthorne district tomorrow to sell.

I wish you lived in the same city as I do. I would happily give an electric and a 12-string a new home. My collection is much smaller (1 6-string guitar)

Is it electric or acoustic?

Is it electric or acoustic?

Those Seagulls are very nice guitars. I know someone who has an Entourage Rustic, she plays at all the open mic events in the LA area. It sounds great and it’s beautiful as well

Mine is the old classic (about 15 years old now). It does sound great and is a pleasure to play. I can’t do it justice.

I have a pretty healthy guitar collection too

It’s funny… While one of them is a fairly costly fancy-pants one, my favourite and best sounding is still my original Yamaha nylon student special that my parents gave me about 35 years ago. Heck I even drilled a hole in the thing to add a bridge pickup (mistake, took it back out) and it still sounds awesome.

Does guitar wood age like fine wine?!? This one sure seemed to!

Old Yamahas are great. They have such full, rich tonal values and yes, they do “age”, just as does a fine violin. The fact that yours has nylon strings, means it’s probably a “classical” acoustic, those are more difficult to play than conventional guitars but the payoff is in the sound (as you’ve found)

Yup, Classical indeed, though I use it more for Latin, Leonard Cohen or jazz … No actual classical here!

Right now though we are infested with children, so they are mostly hidden away

Another great choice. Godin is something of a sister guitar to the vaunted Seagull. I really love their hollow bodies and they make excellent amps as well!

If this thread keeps going much longer, we may have to request a separate “Off-Topic Guitar” sub-forum.

P.S. I may have to go visit the local guitar store after work.

Gretsch, Gibson and Guild. The Holy Grail of acoustics. If this doesn’t give you incentive to stop by that guitar shop … 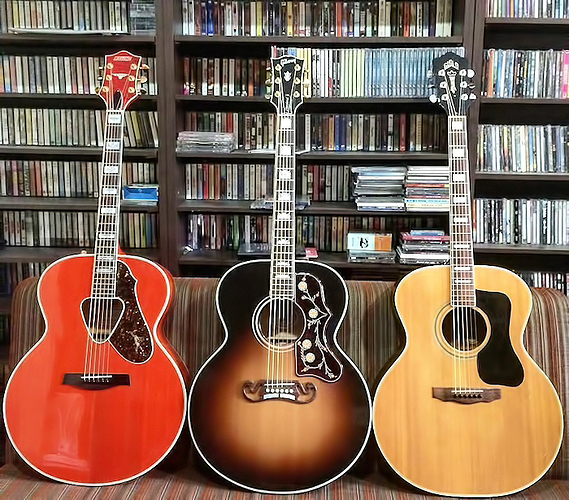 Wait - nevermind the guitars - are those cassette tapes ?!?

They aren’t Betamax tapes, that’s for sure (that bookcase isn’t shown in the picture).

The guy across the hall from me in college had a quadrophonic “8-track” tape player and his suite mate had a RCA CED player (I’m not making this up).

Cassette tapes. I’m not sure if I should admit this, but I do have hundreds of 8-Track tapes as well (and boxes of open-reel tapes).

That is fantastic, I have not seen nor head reference to a CED player for years. I have one in working condition. It was thought to be a challenger to the Laser disc at the time (obviously didn’t work out). I’ve got a box of discs, once a year or so I’ll break it out and play a few.

We watched Alien on it. IMHO, about as useful as the RCA Victor AP-1.

BTW - those are gorgeous guitars! The cassettes just stole my retrotention

My dad’s car when I was young had an 8-track, though not quadrophonic - just 4 stacked stereo “programs” as I recall! Good times

Eight Track tapes did have some merit. For one thing, you could get a lot more signal on that tape than you could a cassette. And you could buy them at gas stations. The biggest problem was the fact you couldn’t space out the timing / length of the songs, so inevitably you’d have one song or another end suddenly (at the end of the track it was on) then wait for it to resume, after the tape started on the next track. Funny stuff. I have a Volvo with an Eight Track deck in it, I keep a bucket of tapes (literally) in the trunk. Take it out once or twice a month.

I have some good music from the past 4 decades that has never made it to CD from cassette or vinyl. Every so often I’ll find at an antique store an interesting LP that the studios haven’t transcribed to CD. These stores will have cassettes and LPs lying around in boxes on the floor. I’ve been converting such tapes and albums to MP3 over the past few years. Also some good films on VHS have never made it to DVD that I’ve also been converting to MP4. It’s fun going through boxes of film and music memorabilia on a Saturday morning in an antique store.