I’ve been using Tablo on my Amazon Fire TV for a number of months. After several weeks of daily use watching LIVE or Recordings, we see inconsistent behavior such as the looping problem described in the Roku forum, pixilation, or just hanging. I restart the Fire TV box and everything seems to run okay for awhile. The other day I was “backing out” of Tablo and I thought it was looping in the backing out process because another LiveTV screen showed up. I backed out of that and magically a recording we had been watching earlier showed up. After backing out of that, it went back to the Fire HOME screen.

I’ve seen this behavior several times now and LOOKS like everytime I click on Tablo from the Fire TV HOME screen causes a NEW INSTANCE of TABLO to start. If I backout of all started instances, run one, everything works well.

Has anyone else seen this?

Thanks for any help!!

@Mycablelesslife Hey there! We got a similar report of this once, but despite trying to test it thoroughly, we were never able to reproduce this.

Has anyone else seen this behaviour?

Seems to happen regularly. Happy to help troubleshoot. Let me know how.

I would bet some of the other “weird” things you get reported may come back to this.

I use FireTV 1st Gen streamers, and occasionally see some wonky behavior. By wonky I mean that I will see freeze-ups, non-responsive remotes, very rarely pixelation. I have always chalked it up to standard Android instability and just reboot the FireTV and all is magically fixed for a while.

I see this about once a month. I also see similar behavior on my two Fire Tablets, neither of which even have the Tablo app loaded.

Any news on troubleshooting the multiple instances on FIRE TV?

I am running the most current firmware for the FIRE as well as Tablo.

Seems like when Tablo starts on the FIRE, it starts a new instance when it should return to an already-running instance (if it exists).

Have a GREAT holiday!!

Which Fire TV? Doesn’t do this on my 1st gen box running the newest firmware.

Bought the Fire TV new from Amazon about 8 months ago. I guess that’s Gen2 ?

^ Has anyone else using the Fire TV app had @Mycablelesslife’s problem? We’ve tested this here without any success so far.

I am using the 2nd Gen Fire TV. So I believe that this is what I am seeing. I thought at first that when I backed out of the Tablo app, the app was just restarting rather than exiting as a bug. After reading this forum, I too am seeing this scenario…

I have a 1st gen fire tv that when I try to exit out of the tablo app it loops back into the tablo program. Either by going back to a live channel we were watching or by “trying to connect to tablo” screen. It doesn’t do it all the time but I’d say 80-90% of the time.

If you want my opinion on what is happening, the app is not executing the “stop” command properly.

To confound this, my wife does not exit the app properly. Meaning she likes to click the “home” button on the fire tv remote (which ALWAYS brings it back to the fire tv home screen). She never exits the program by going to the exit menu button within the tablo app.

When I try to exit the program properly (which is a lot slower due to the number of clicks and responsiveness of the app than just clicking the “home” button), it loops as described above. For this behavior to stop, I force close the app through the fire tv settings. This works until my wife uses the tablo app again. She watches more tv than I so this is something I have to live with. (hahaha)

Very odd. Sounds simple, but we haven’t been able to reproduce what you folks are describing… I’ll chat with our team and we’ll take another look.

I am happy to help diagnose. Let me know what you need and how to get it…

I have 4 Fire TV devices (2 sticks & 2 boxes) all 2nd gen. I have never experienced anything like described. I always exit Tablo by hitting the home button on the Fire remote BTW.

I have a 4 tuner Tablo and also see multiple instances of the Tablo app on my Firetv Stick. I believe a few times it has caused the Tablo box to reboot. It appears to occur if the home button is used to exit the app (as my wife does), then the next time we use the app and I go to exit using the exit menu the screen goes black, then white, then shows the connecting screen, and finally what looks like a prior instance of the Tablo app (because it may show a previously watched show that ended, usually due to someone falling asleep while watching). There have been times when I had to exit up to three instances before seeing the Firetv home screen.

Happens on my fire tv. I have to hit the home button to eventually back out.

This happens to me as well. Definitely happens on the 2nd generation Fire TV box (the one we use the most) and I just tried it on the 1st gen box we have but was not able to make it happen there.

Update: I have reset my FireTV to factory defaults and re-installed Tablo…same results. Using the HOME button on the remote when Tablo is running, followed by running Tablo actually restarts a new instance of Tablo. This is known because exiting Tablo from the Tablo screen, exits the existing Tablo session, revealing the previous instance of Tablo (right down to the minute of the show I was watching when the HOME button was pressed).

Update: I have reset my FireTV to factory defaults and re-installed Tablo…same results. Using the HOME button on the remote when Tablo is running, followed by running Tablo actually restarts a new instance of Tablo.

Hi there - We haven’t been able to reproduce this here at HQ.

Are you using the Fire TV box or stick? Which generation of the device are you using?

When you say home button, I assume you mean the one circled in red?

When you say, “Exiting from the Tablo screen exits the existing Tablo session…” What process are you using to exit? What are you doing in the Tablo app at the time? 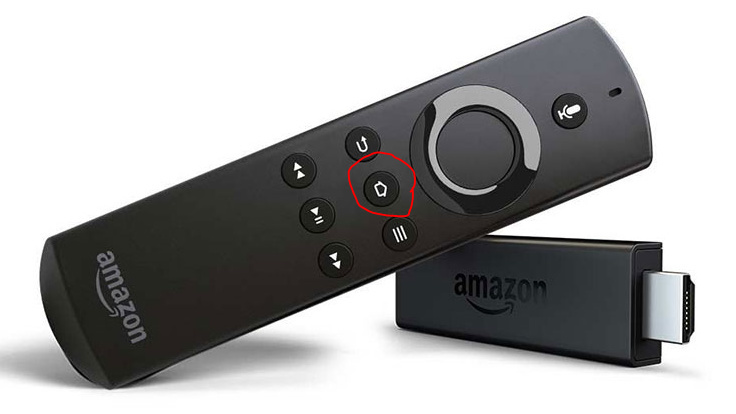