The new release today (1/19/17) no longer sorts all recordings correctly. it also freezes.

Rather than present the shows in alphabetical order, the sort now presents some mixed up combination of recent recordings and partially alphabetized recordings.

I am also finding freezes in play back which did not occur previously.

This app for the iPhone and iPad rarely gets updates. It’s a real shame that they are so full of bugs, so poorly tested, and continue in the tradition of one step forward, two steps back, Tablo software at its worst.

Yes, I know, theuser86, you are not experiencing these problems.

Under the Recordings section, are you sure you have “All” selected? Rather than “Most Recent”?

When I have All selected, they are sorted alphabetically. With “Most Recent”, I get a chronological sorting.

As well just to clarify, the iOS iPhone and iPad app are different. The iPad app has not been updated recently and it is on v1.2.3 from November 2015. So I’m assuming your issues are only on the iPhone?

However, with your luck, an app that hasn’t been updated in a year could only now start having problems.

Under the Recordings section, are you sure you have “All” selected? Rather than “Most Recent”?

When I have All selected, they are sorted alphabetically. With “Most Recent”, I get a chronological sorting.

Retired for several decades and enjoying it fully, except for Tablo updates… LOL

Yes, I am using the sorting tabs as you describe. The friggin app is, again, borked by bad programming.

Take a read of the App Store reviews and they are FILLED with reports of issues.

As always, GLAD to hear YOURS works fine. I am an Apple developer using their newest release iOS so I will acknowledge that may be involved.

I will also mention that a prior bug preventing proper quiitting of the player in Landscape mode DID FINALLY get fixed in this release. I had that bug for the entire 30 months of using Tablo with 3 iPhones, countless versions of iOS, and several app updates. I posted a screen shot showing it occuring. And naturally, your response then was predictably, you did not have that problem either. Thankfully I treat all of this with LOL. I hope to live to a very ripe old age and follow the Tablo releases as a badly written comedy… 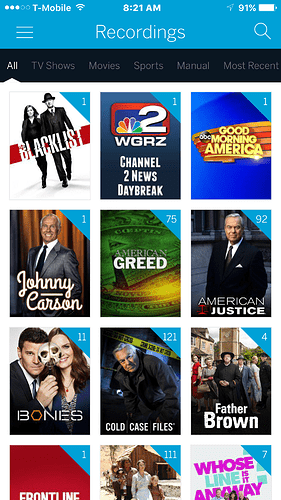 As well just to clarify, the iOS iPhone and iPad app are different. The iPad app has not been updated recently and it is on v1.2.3 from November 2015. So I’m assuming your issues are only on the iPhone?

However, with your luck, an app that hasn’t been updated in a year could only now start having problems.

Thank yoy for clarifying. I was actually goIng to NOT install the App Store iOS update on my iPads to prevent this and new freezing bug.

My luck is really not the issue. Tablo software QA is very lacking. Many hundreds if not thousands of people on Amazon, the App Store, and this forum are not unlucky. WOULD YOU PLEASE STOP BLAMING THE VICTIMS!!!

I suggest you try disconnecting from the Tablo; remove stored sync data in the media device, and perform a fresh complete re-sync.

Doing so improved the response of my Amazon Fire TV Stick.

Takes only a few minutes; is non-destructive; and can’t hoit.

Your suggestion was superb!

No idea if the freezes still occur. Will try this out when I get home later today.

Same recordings as in screen shot above but now properly sorted: 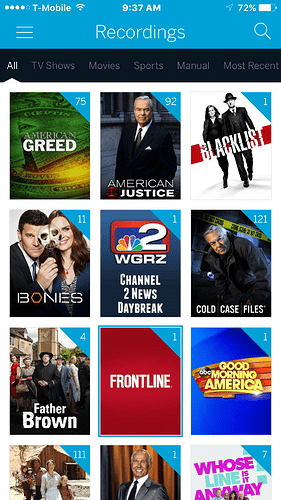 @RetiredEngineer Your Tablo’s on 2.2.12 - correct? Any chance you can post a screenshot of the Settings screen from the iPhone app? Just wanna take a look at the version and build number posted at the bottom. We’ve tested this here with the same published apps but have been unable to reproduce thus far.

Edit: Just saw your post above. Keep us posted!

emphasized text[quote=“TabloSupport, post:8, topic:10596, full:true”]
@RetiredEngineer Your Tablo’s on 2.2.12 - correct? Any chance you can post a screenshot of the Settings screen from the iPhone app? Just wanna take a look at the version and build number posted at the bottom. We’ve tested this here with the same published apps but have been unable to reproduce thus far.

Edit: Just saw your post above. Keep us posted!
[/quote]

Thank you very much for your prompt reply.

All good news to report here:

The reset process described above fixed both the sorting issue as well as the freezing issue, so the lack of cache currentcy seems to be the cause. No doubt, some code could be added to the new app to prevent these issues. Providing the user with a recommendation to manually reset/reboot/re-sync would be the next best solution. Either way, I’m delighted to have things working properly again.

You probably do not need this now, but I am including the information you previously requested. Please see below. 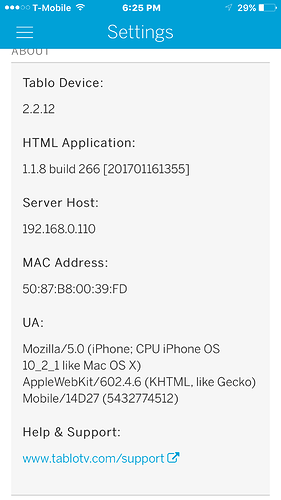 And for the issues on your iPad app?

As I continue to use the Table app on my iPhone 6+ will latest version everything installed, I am seeing numerous occurrences of SOFTWARE BUGS which mess up playback, fast forward and rewind scrolling, and scrubbing of the time line.

The bugs most certainly did NOT EXIST in the prior iOS app release, and can make playback annoying and sometimes impossible on the iPhone.

I am reporting here without any intention / expectation of trying to prove, explain, or defend my complaint / observation. I have absolutely no desire to engage in the time wasting dialogs of the last 31 months of “I have never seen this ‘supposed’ problem from my special perch in Ottawa” so you, Retired Engineer must be UNLUCKY and no doubt, having a bad retirement besides.

Maybe you can open a Support Ticket with Tablo detailing every bug to work on - it all should be fixed. They’re quite open to direct communication via the tickets.

Makes the experience better for all of us.

Ticket submitted (1 hour later same day as above)
And succesfully entered as:

It will be interesting to see how long it takes for this problem to be fixed.

My previous iPhone app bugs (screwed up icons and landscape mode formatting mess) took over 1 year and 29 months to fix, respectively. Sadly, the latter 29 month fix brought with it new bugs such as the ones posted in this thread.

Sorry to be such a nag…

All I want to do is watch two shows daily on my iPhone, which I have been able to do for 2 1/2 years without complaint until this damn update broke the player.

Now I can no longer watch/listen to the morning news or the nightly Charlie Rose NPR show on my iPhone in my car as I have for nearly 2 1/2 years since it freezes, the player buttons are ignored, and the timeline cannot be scrubbed. On top of that, restarting the playback loses the point of freezing, always reverting to the very beginning of the play back.

I absolutely dread receiving updates from Tablo since they invariably are filled with new problems which clearly shows a terrible lack of quality assurance.

I did indeed reinstall the app on two separate occasions. In both cases. this provided an immediate benefit, making the player work properly without freezing. (Reinstallation also corrected a sorting issue which caused the alphabetized Icons displayed in the “Recordings” homepage to lose their correct alphabetical sequence.)

The improvement from reinstallation of the app is only temporary, however. Over time, the player again begins to freeze, the control buttons have no effect, the timeline scrubber cannot be moved, and the player can only be restarted manually, at which point it loses any memory of where it previously hung. So restarting of play back always begins at the start of the recording, never able to resume were previously left off.

If I were willing to reinstall the player on my iPhone every week or so, I might not see this hanging problem whatsoever. In fact, my delay in reporting this as an issue is a direct result of the fact that a fresh installation delays the problem until quite a bit of playback use and time has elapsed.

Thus, we have a bug which is hardly obvious and only replicated after many days of use. When it begins to happen, it happens very frequently. And reinstallation of the app does, temporarily, fix it.

I hope this discussion above sheds some light on the issue to assist in debugging.

To retiredengineer, it looks like you are on to something. I checked memory usage of the Tablo IPhone app and saw a big difference between a “fresh” install ~35 mb after sync and long-term memory growth ~430 mb. I tried disconnect/clear data at the snowflake/ and then checked memory before resync and it had not diminished. See screenshots to follow.

BTW, I am also a retired Electrical Engineer 69 years young and an Amateur Radio op WA4CUA. 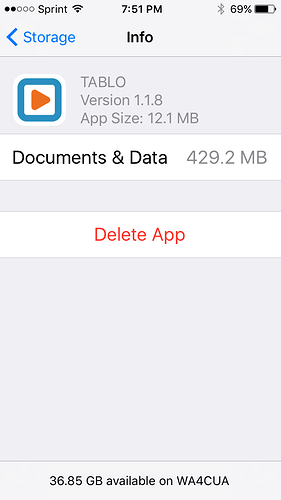 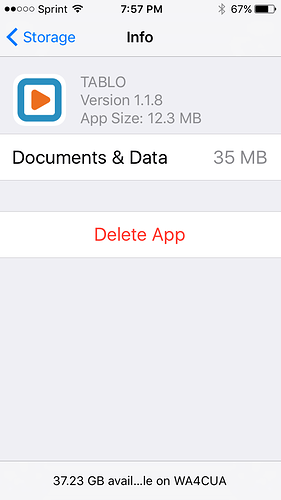 That “syncing” process stores a huge database of the show info for everything on every channel. Just the way it is.

The freezing occurs long after the re-sync, so the additional RAM needed after re-sync is not the problem. But continuing use of the player quite likely DOES continue to grow the memory or overwrite some vital code which hangs the player. A memory leak or improper release would explain the slowly degrading performance, particularly since my 64GB iPhone has very little remaining unused memory, approximately 400 MB free. No doubt in my mind that this new freezing bug along with the screwed up alphabetic sorting are fixed by reinstallation of the app with the new small memory footprint.

Hope that somebody at Tablo will take a look at their code and find the memory issue.

See below data memory with fresh app load, which only increases to 25 mb after first sync.

I would have thought a disconnect/snowflake purge would have cleared the data memory back to the level of a fresh load, which is less than 1 Mbps before next sync after snowflake.

I was in NSPE but not IEEE. Could not afford membership dues for both. 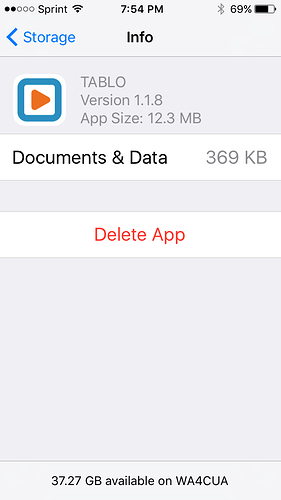 Make that 35 mb after first sync after app reload. Also that includes data for 31 active channels in my case.