There are a few threads on the forum about two separate issues: 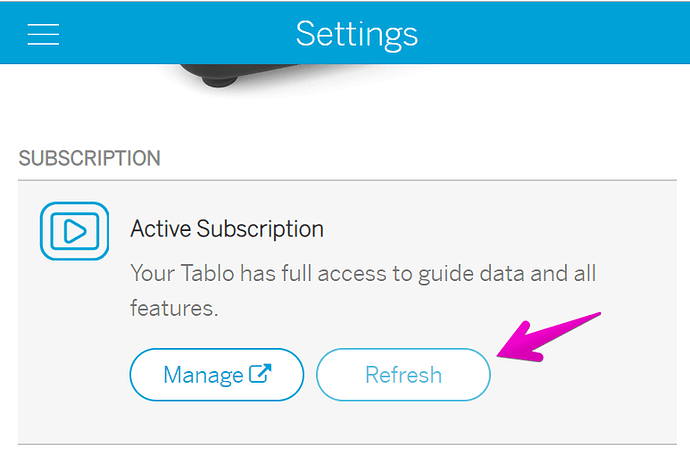 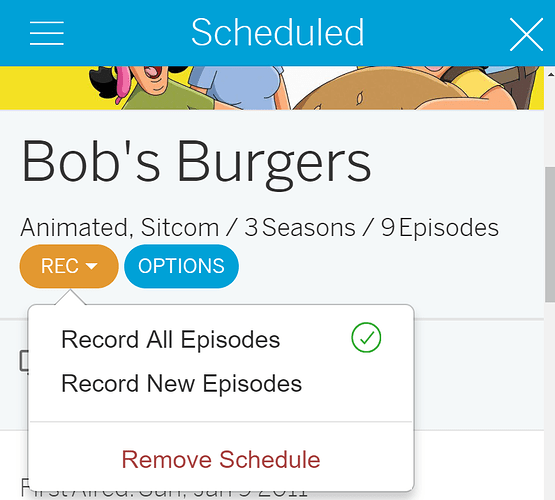 For those with a significant amount of scheduled shows, send our support team a ticket and we’ll get back to you with instructions for remote access. We should be able to reschedule your shows for you. However, please note that this may take a couple of days as we work through this.

We sincerely apologize for the inconvenience and appreciate your patience.

Found that some shows that got rescheduled still did not record as planned. I have to check daily on the live grid to make sure they show up in orange.

Found that some shows that got rescheduled still did not record as planned.

In the cases we’ve seen, the series level recording remains set (as shown above) but the episodes were unscheduled.

An easy way to check is to look on your Roku, Fire TV, Android TV, or Apple TV under:

This will list all of your upcoming scheduled recordings.

You can also look in any app at the episode level under each series to ensure they have the orange REC tag:

The solution for the second problem only works for shows you have scheduled using “All” or “New”, I found several movies that I had scheduled to record where the schedule was completely lost. Luckily I was able to figure out which ones were missing… I hope…

Yes - movies don’t have series containers like TV shows do. Definitely worth noting!

Due to the problems that you were having I missed the season finale of The Good Doctor. Is there some way it can be made available?

One option is to wait a week and then go to ABC’s website. 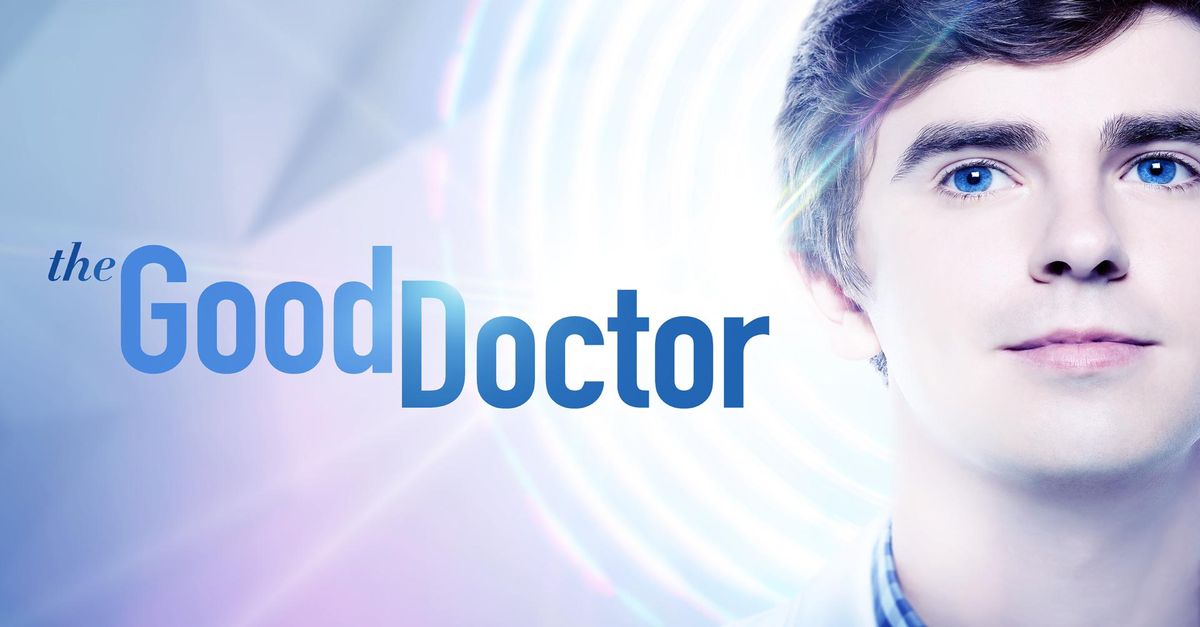 Thanks. I did not realize that it will be available for free online in one week.

Have tried the “fixes” suggested here and still missed recording every show which appears in “Scheduled”.

The apps for my Laptop and NVIDIA Shield, Samsung TV, and KODI/LibreElec/Raspberry Pi all behave differently.

Only the NVIDIA Shield shows a full “guide” while all others only have maybe 5% of the show information populated.

On the NVIDIA Shield, even though shows appear in the “Scheduled” menu, when viewed in Guide, the little orange to be recorded indicator in the upper right corner of the guide listing does NOT appear and of course they are not recorded.

On the Samsung and Raspberry Pi systems, the “Scheduled” menu item is totally blank with no shows listed.

It is available on KODI with various addons. Usually within 10 minutes after it completed it’s airing.

Well, that was a drag. I missed a bunch of shows due to this, and only realized they weren’t recording after three days (I usually catch up on the week’s viewing at the weekend).

I thought my Tablo was failing, but I guess it was a “programming opportunity” at Tablo.

My first decent issue with Tablo, and only a couple of months in … hmm …

I got a ticket issued by Tablo and they had me put my unit into Remote Access mode and an hour or so later I got an e-mail that it was fixed.

Not even close to being fixed. Regardless of the TV, Box, laptop, app used, I have not been able to record anything in over a week.

Now Tablo is ignoring my e-mail responses to their ticket #. Guess they have given up.

Maybe smart back from the beginning since it was working before. Kind of like when you’d reinstall Windows to get everything back to normal.

How to Factory Reset your Tablo

A reset to Factory defaults makes a lot of sense if it were not for one recorded show I wanted to keep. Don’t understand why retaining show data on the external hard drive would be affected.

I’ll do a search on KODI to see if that one show is available, and if so, and if the people at Tablo do not respond on Monday, I’ll try this.

Thanks for taking the time to respond.

I agree the factory reset is the nuclear option but if you don’t solve it another way might as well give it a try.

Thanks! I did find the only critical movie on KODI so, again if Tablo does not respond, I do the reset.
Thanks again.

I may have found another solution. In troubleshooting this on my own I did a rescan of channels which forces a guide reload. That appears to have everything back to recording.

That was worth a try, but all I have, after a rescan and a guide refresh is a grid which shows all the available channels with zero show information. Same on all my devices.

I cannot even watch live OTA because Tablo will not allow me to access from a grid location void of information. Seems I’ll have to do the reset to factory.

I think your initial thought might end up being the last solution before finding another option to record OTA shows.

Amazing, that we can get content from around the world but OTA has been, at least in my case, the most troublesome and least enjoyable adventure.