Many of your points are valid, unless there was a complete overhaul with the “HDMI” device - all too often there seems to be unfortunate reasons why not…

There needs to be a live signal quality indicator. And the “weak signal” popup box that sometimes appears is useless. I keep hitting Retry and it keeps appearing. The Tablo Dual HDMI should just retry all by itself; and certainly not give up.

Here… why it keeps asking, is a great one. Is it trying to wear you down? Has it ever worked for anyone? Why doesn’t is ask “Are You Ready To Accept Defeat?”. The device seem to realize it’s futile - why not design it to move on and not “cat and mouse” the user?

Hi @e645824 - One of your feature wishes made it into the latest firmware update:

Hi folks - Another new firmware release for Tablo DUAL HDMI is on the way. (This release is NOT for network-connected Tablo DVRs.) This is a second maintenance release intended to address some additional issues seen by early customers. A notification will pop up in the Tablo interface by tomorrow (Wednesday the 16th of December) but you can check for and process the update immediately by going to SETTINGS > ABOUT > CHECK FOR FIRMWARE UPDATE. [tablo_hdmi_check_firmware_update_markup] Here’…

SteveB, can you pull a similar list from your video and include it in this thread?

Hi Scott, sorry I never responded to this. I pretty much dropped off the board after the first update was issued. See below for some more items for the list

Hi folks - Another new firmware release for Tablo DUAL HDMI is on the way.

@TabloTV - Thank you for continuing to push out updates. Timely updates are very reassuring that you are trying to improve the DUAL HDMI

Per Scott’s request, here are some additional ideas for software enhancements.

I have no idea what it is trying to tell me, but every time it appears I click and it goes away. If you must have it, put it in a loop and click the “Retry Playback” button every second for 10 seconds or so. After 10 seconds you can tell us whatever we need to know, but my experience is that it will appear for 1 second and then be gone.

a) The spinner appears for several seconds.
b) If I’m not mistaken, the error screen shown above appears
c) After clicking “Retry Playback” a screen appears that no tuners are available.

I would suggest to always check tuner availability first after clicking “Watch” in live TV. If both tuners are in use, inform the user. I have to believe that would be nearly instantaneous.

BONUS POINTS: If both tuners are in use, present the user with the same “Resolve Conflicts” dialogue that you have on the Recordings screen.

For example, I have my unit set to record all Seinfeld shows. I probably have 30 shows recorded right now. If I see something on live TV that I want to watch, and you present me with the “Resolve Conflict” dialogue, I can quickly decide that I don’t need 31 Seinfeld’s and stop the current recording to watch the live show I was trying to select.

SUPER BONUS POINTS: On the “Resolve Conflicts” dialogue mentioned above, include an option to stop the current recording AND delete it. In my above example I don’t want a fraction of a show, I’ve got 30, I don’t care about the one that is currently causing the conflict, so allow me to quickly stop the recording and delete whatever has already recorded so that someday in the future I don’t start watching that episode only to find that it was stopped before the end.

I realize that this might be difficult since the remotes are already in the field, but you should have asked be before you designed them…

Thanks for your consideration on any of these suggestions.

New product releases always go out the door with a known set of issues(problems). Fixes to many are ticketed and prioritized somewhere in the outstanding issue list.

I would expect the first few updates to address problems and not new features. And tablo spent years trying to get all the various apps for headless network attached models to be consistent.

It will be interesting to see if tablo allows the HDMI model feature set to significantly drift away from the network attached model. Especially since users can connect various network apps to the HDMI model.

Thank you for continuing to push out updates. Timely updates are very reassuring that you are trying to improve the DUAL HDMI

We’ve had almost 40 firmware updates for the networked DVRs, tons of app updates for all of our various streaming apps, so HDMI will be no different.

We’ll have frequent updates over the next little while to iron out some of the kinks, and then move to a more quarterly-ish cadence thereafter.

FYI - The FFWD button does skip by 20 seconds (not quite 30 but I’ve passed that feedback and the rest of your wishlist along to the team). The DPAD will take you 10 seconds forward or back. 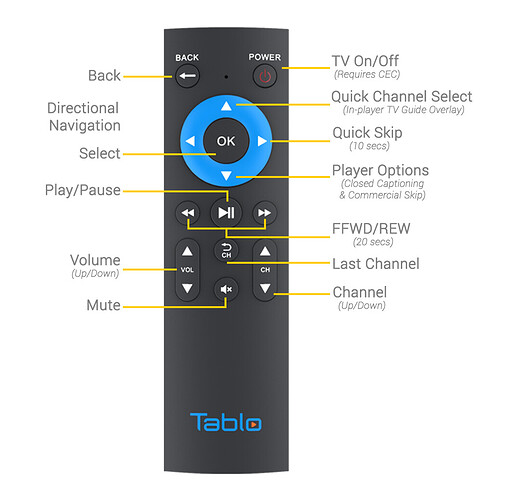 Thanks, but it doesn’t skip by 20 seconds. It presents a picture menu where I can decide if I want it to 10,20,30,40,… seconds skips forward, then by using the arrow key, then the Enter key.

Likewise, the Quick Skip and FFWD do exactly the same thing. Based on the remote’s descriptive, that was probably not the designers’ original intension.

What I would like it to do is just skip forward 30 seconds when I press the button. The fancy popup picture menu is fine for the other button.

The January firmware update did not incorporate any of #2-13 of the Features list (the first post of this thread).

Thanks for your feedback, we’re looking into you #11 & #12 for you right now via our support team. The MAC address you’re seeing is something we hope to correct for you in the short term.

I’m seeing empty guide slots since the firmware upgrade, but it seems only for shows playing around the current time. When I forward in the guide all guide slots are filled. Anyone else with this issue? 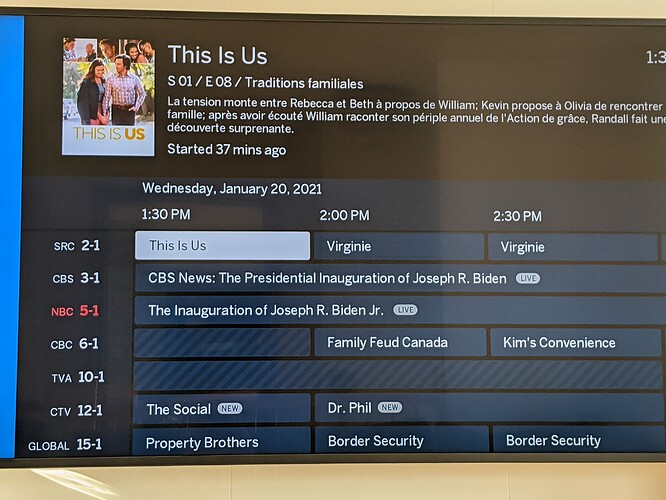 I’m a new user - as of Jan 7. I’ve seen the missing guide slots, too, but not often. Sometimes clicking the “Clear User Interface Data” button in the Settings (scroll all the way to bottom) fixes this and other temporary glitches. It’s akin to clearing the cache.

Since the Edit system in this Thread only allows 10 edits of a Post, I can’t continue to keep updating the entry in Post 1. So here is the updated version of the list (that should be good for 9 more edits).

Unless there is an ungodly bug, firmware release seem to only appear every 4-5 months.

Thus I would assume that all features in your list won’t be implemented before your edit limit expires.

Since the Dual HDMI is new, firmware releases happened in mid-December and mid-January to address obvious bugs. Since they recently came out with a firmware update for the non-DualHDMI systems, they might be integrating those changes into the DualHDMI firmware. So I would expect (hope) for a firmware update shortly for the DualHDMI.

In working with Tablo Support, I know that they are working on #12 so it should be in the next firmware release. #13 is just as trivial.

Aren’t #12 and #13 bugs and not features? I’m only talking about features.

#3 is definitely a new feature.

In reading through that thread, there seem to be objections that this feature is too complex. Since other DVR systems can do this (e.g. CM DVR+, etc.) then the Tablo developers should be able to accomplish this also.

These are good suggestions, but for some of them I would caution trying to make an apples to apples comparison of Tablo to other DVR systems unless those systems are also transcoding while recording so that no further transcoding is needed on the playback devices.

Of course there are always changes that would make tablo users love their plex on nvidia shield even more.

Excellent point. As discussed in the past, there really isn’t a 1:1 comparison with OTA DVRs. They vary greatly, how the function, required hardware, playback options as well as technology differences.

Unlike many commercial cable/satellite conventional DVRs many had become accustomed to, were vastly similar in “features”.