my main router was bad. It was replaced but tablo wont connect. I have a Netgear box that is connected to the TV because the main router is too far away from the TV. the TV connects to the Netgear box but I cannot get Tablo to find a connection. Thoughts?

Tablo wont connect to the replaced “main router” or the “netgear box”?

If you have a “main router” do you have a secondary router? Or would this be the “netgear box”?

To what and how does the “netgear box” connect to… ?

How many network routers are there? A “main” and …?

so I think i can just use an ethernet cable from the tablo to the netgear box and avoid all this wifi business. correct?

Also, a wired connection between the Tablo DVR and the router normally gives a better experience.

Yeah. No clue why it didnt work. 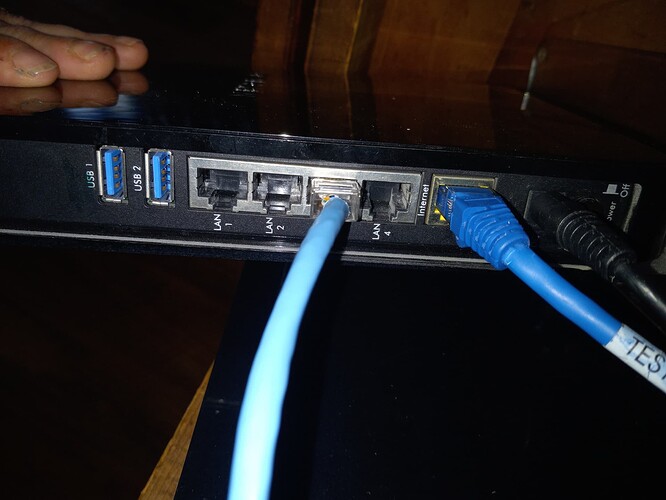 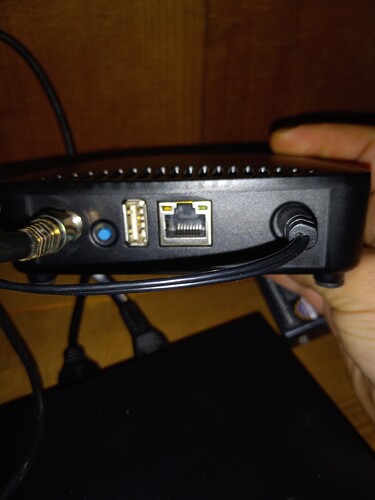 Did you try a reset as indicated here https://support.tablotv.com/hc/en-us/articles/360028021271-Switching-from-Wi-Fi-to-Ethernet-OR-Ethernet-to-WiFi it should pick Ethernet over Wifi. I know it sounds silly to ask, but we all get frustrated with technology and overlook small things.

Did you plug in the cable to where the dark blue cord is or the lan4 socket? If it was the first, that connects to the internet. You have to plug it in to one of the lan sockets.

Say again? Plug the light blue cord into lan 4 and the other end into tablo?

They both don’t connect to the internet unless you have mulit-WAN.

You can leave it where it is and plug the other end into the tablo. The tablo can be plugged into any of the 4 sockets that says lan#. I thought you were plugging the dark blue cable into the tablo. That socket goes to the internet or the main router.

The light blue cord from the netgear box goes out the back of my cabinet and is attached to this white adapter thing then the cord goes into the wall. I don’t know where it goes after that.
I tried that light blue cord. I disconnected it from the white adapter thing and plugged it into the tablo and nothing. And yes. I hit reset. unplugged it and plugged it back in. Still nothing. Maybe this will help…
I have an old house with thick walls so in order to get good wifi upstairs, I have 2 routers. So here is my set up. I have my ISP’s router in the front of the house (Centurylink). In my family room, I have a Netgear box. My tv (and all devices) can connect to both boxes. The tablo is in the family room right next to the netgear box. I don’t know how the netgear communicates with the ISP (centurylink).
I cant even connect via wifi to the tablo. I don’t know which router the tablo is trying to wifi connect to. Since I had to get a new Centurylink router yesterday, Im assuming that I’d have to put in the new password, but its not even getting to that point. I only get the screen on my TV with the Search again button. Any help or suggestions would be appreciated.

Tablo is currently connected via wifi through the app on an unactivated cell phone I use when im listening to music outside. its working ok. but i’d really like to get the ethernet thing figured out. Im going to try again on Saturday. Thanks!

attached to this white adapter thing then the cord goes into the wall. I don’t know where it goes after that.

Maybe a powerline adapter? “into the wall” - plugs into an electrical outlet? And maybe another near your Centurylink device connecting to it?

Power-line communication (also known as power-line carrier or PLC) carries data on a conductor that is also used simultaneously for AC electric power transmission or electric power distribution to consumers. A wide range of power-line communication technologies are needed for different applications, ranging from home automation to Internet access which is often called broadband over power lines (BPL). Most PLC technologies limit themselves to one type of wires (such as premises wiring within a s...

ah. sorry. so maybe. I have no idea whats going on behind the tv and especially this box that swallows up the cords to what?..the belly of the house? lol
So if i use the light blue cord - disconnect it from the white adapter and plug it into the tablo, will that work? or is that how the Centurylink router is communicating with the Netgear router?

Yes, not trying be smart. Im sure from where you’re at telling us you got a new main router while your TV and tablo connect to a negear box is clear and as technical as it gets, well yea there’s an adapter thing as well.

Its unfortunate when there’s different names, often incorrect for technical terms. Its likely there are people here who can assist getting you up and running - one they get the complete picture of your setup.

Sadly, not necessarily what it looks like (to you), but specific details. You’re interchanging with some real tech geeks here. But, been through it as well and can keep it simple once they understand details.

Model numbers of equipment would help too to identify what it is router, ethernet switch, etc. Can you just put everything back like it was before the other router needed replacing, since it was working then.

Mine is connected wifi and when I got my new router, I just named the wifi the same as old one so everything stilled worked.