Can you reboot a Tablo remotely?

Is it possible to reboot a tablo remotely? Like from iOS Client? I am having an issue where live and recorded programs can not be watched remotely. (Loads and then goes back to guide.).

Which iOS device? What version of iOS is it running?

You can do it with a remote controlled outlet. You plug the Tablo into it, and then you can turn it off and then on again with a smartphone, tablet or PC. I also have it on a schedule to reboot every 3rd day.

Not sure that this something that Tablo support recommends (would like to hear from them about this) as you may be cutting off the electricity when Tablo is writing to the hard drive which could corrupt the database. Tablo Dave - what say you?

@jdoe - That is correct… If your Tablo isn’t doing anything at the time, it’s less risky, but we don’t recommend just yanking power if it can be helped which is why the blue reset button exists.

@TabloTV I too would like to know the answer to this as I have a similar question. That is I need to move some of my hardware components around to re-organize the router, modem, tablo, hd, etc.

Mainly right now I have a very long hard drive cable from the tablo to the hard drive that I want to swap out for a shorter one to tidy things up a bit. But I’m not sure how best to do this considering there’s no way to shut down the tablo other than pulling power…and the same thing for the hard drive (my drive is a full sized drive not a notebook drive so it has it’s own external power source).

I have yanked the power cord out of my Tablo many times and never lost anything. It isn’t something I would worry about.

@jbsmith_05 - When removing power from Tablo, hit the reset button… the led will start flashing. Wait for the light to go solid before removing the power.

This enables Tablo to complete its entire shutdown procedure which will ensure zero data loss or corruption.

@Reg1982 - No, that’s not the case. 99% of the time, nothing bad will happen when your Tablo loses power. However, in order to avoid that 1% badness (which is usually a corrupted drive), it’s always best to use the above procedure.

When removing power from Tablo, hit the reset button… the led will start flashing. Wait for the light to go solid before removing the power.

This enables Tablo to complete its entire shutdown procedure which will ensure zero data loss or corruption.

So then the proper way to move/shut down my hard drive is to hit the reset on the tablo, once it stops flashing unplug and/or power off my hard drive, then move stuff around.

As for powering back up the hard drive…should I just plug it into the tablo and turn on the hard drive or do I need to do some process with the reset button for it to recognize the hard drive has been connected?

@jbsmith_05 - It’s best to have the drive connected on boot up.

So then the proper way to move/shut down my hard drive is to hit the reset on the tablo, once it stops flashing unplug and/or power off my hard drive, then move stuff around.

Hit the button, wait for the blue light to go solid, then unplug the Tablo. Then turn off the hard drive, move it, and turn it back on. Then plug the Tablo back in.

Getting back to alternatives to rebooting, my Tablo is physically installed in a remote location. When I am at home, I have no problem trudging upstairs to a closet and hitting the reboot button. However, for whatever reason, the wife does not want to do this. And as stated previously, my Tablo has an established history of going off line or other problems as soon as I go out of town.

So I purchased a “AVANTEK WiFi Remote Control Outlet Switch Electrical Wireless Smart Plug for Lights and Home Automation with Timer and Energy Management” from Amazon for less than $30. I installed the remote control app on all of my smart phones as well as tablets. This allows me to accomplish two things: 1) “reboot” the Tablo without being there, and 2) set up a schedule to “reboot” the Tablo automatically. Just last night the Tablo got caught in a loop where it just keep showing the same 10 seconds of TV for a certain channel over and over. One quick tap on the phone, and it was rebooted without having to access the Tablo directly.

Another poster was worried about losing recordings or corrupting the database on the hard drive. The only time I “reboot” it by cycling the power is either 1) it is already inoperable, nothing to loose, or 2) I have scheduled it to reboot every 3 days at 3 AM when I am sure no one is watching TV or recording.

My best investment was adding dedicated antennas for each TV, and stopping using the Tablo as my main method of watching live TV.

Be careful with 3 am reboots, the Tablo has scheduled overnight maintenance of the database to optimize it. Could be a disaster waiting to happen.

Well, hopefully their software will tolerate a sudden loss of power, whether it is by accident or on purpose.

I would think it would be the same risk as your computer losing power. Small chance to corrupt the HD, but still possible.

EDIT: meaning, you don’t just cut power to your computer, you perform a shutdown or restart.

Tablo developers should provide a way to gracefully shutdown or reboot their device through the app from phone or tablet. I have cameras that have reboot option on the app. How hard can this be added to the app?

Does gracefully shutdown the tablo mean turning off the power completely off?

If so turning the power back on would probably require the unit be unplugged and plugged back in. I don’t think the reset button is also a power switch.

One of these will do it pretty inexpensively… 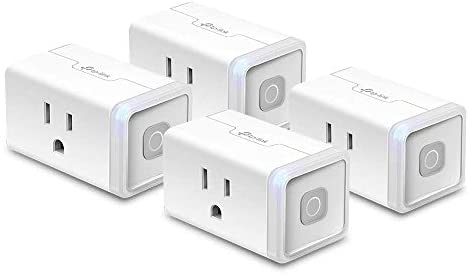 It’s a good idea to make sure the unit isn’t accessing the hard drive before you kill the power but that’s easily checked by looking at the live guide. I use one and it works well.

Since most wall plugs are 15amp I prefer 15 amp models like the hs105. I currently don’t hang anything that draws very much power off of my smart plugs. But I don’t want to try to keep track of which plugs are 12 amp versus 15 amp.

I guess I could take a red marker and draw a big red dot on the 12 amp.