Can someone help me with MCEbuddy?

Im using Tablo ripper which works fine. Files end up as I would expect and have file structure and info so plex recognizes them.

The problem is after MCEbuddy rips them the season#, episode# and episode titles are lost. I tried setting as below and it made no impact. 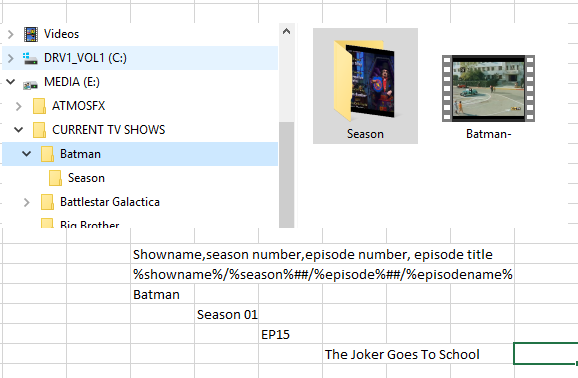 Can someone steer me in the right direction so Plex can find them after commercials are removed?
Oh and I am using MCEBuddy 2.3.13 I know its no longer supported but I don’t want to spend money on software unless I 'm sure its going to work.
I followed the advice in the thread about Plex and started there but it still wasn’t working. 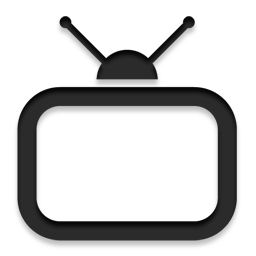 @Bruce did a really good job with the “how to” wiki entry you’re referencing. Have you followed it step-by-step and/or tried contacting him as he suggests?

If Plex isn’t finding your commercial-stripped output, have you checked that your Plex library is pointing at the correct folder (the one containing your .mp4 files) including subdirectories

@FS_3 - To help troubleshoot this, could you post a few screenshots?

will do after work today. I went ahead and bit the bullet and purchased the MCE buddy software so hopefully that will eliminate that as an issue as well. 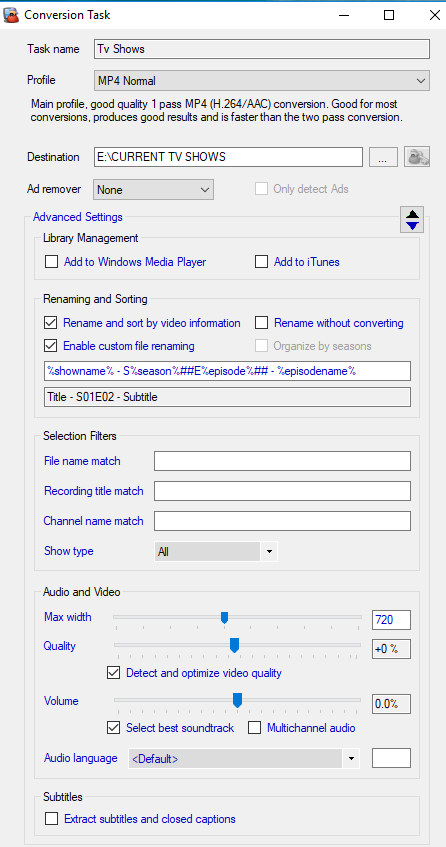 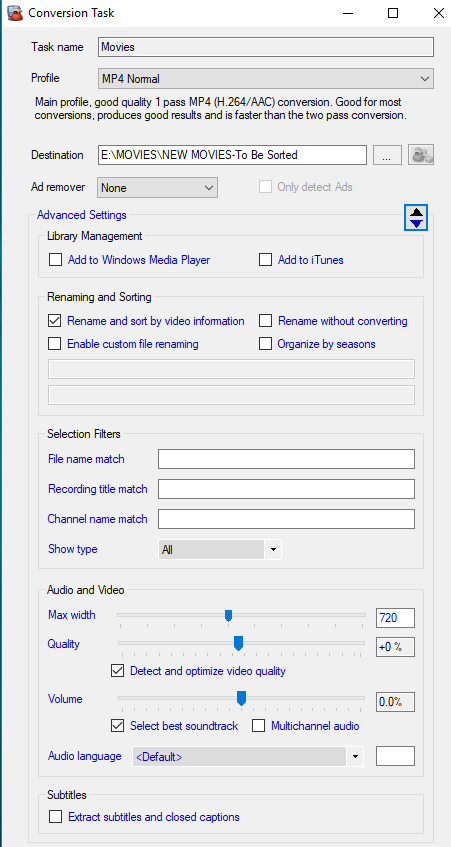 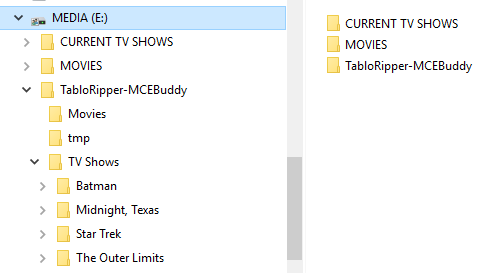 Since Upgrading to the donater Version I am going to try again. Will reply back in a while.

Ok I just ripped a Batman episode to my Tablo ripped folder. When MCE Buddy starts it starts 2 versions one in movies and one in Tv shows. Any Idea Why? I thought it was just supposed to monitor and start the Task from which ever folder has the new file in? 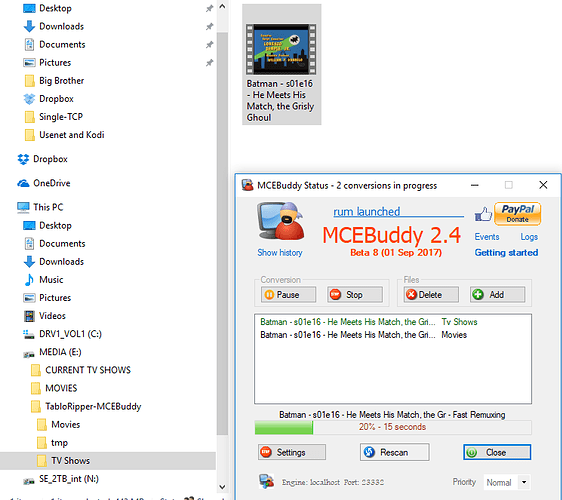 I went back thru CycloJ’s procedure and set all up as he did . MCE Buddy is working thru the file now.

I imagine it’s doing it twice because you have it monitoring the one folder but have two tasks assigned. I would think anything in the source folder would have both tasks run against it.

To stop both conversion tasks from running on the file, you need to set the “Show Type” value in the Selection filter.

The best place to start is in the Tablo Ripper config, Add Metadata. Try de-selecting it. @CylceJ posted about this a while ago: Tablo Ripper - Automatically download new recordings

Your MCEBuddy custom renaming for the TV Show conversion task is a bit different from the guide. It doesn’t look like the files will be put in a directory for each show and season. Not sure if that is important to you.

If removing the add metadata option doesn’t help then try this next (still with metadata turned off). Go into Expert Settings in the Conversion Task (the button is between Save and Cancel).

Let us know how this works out.

Ok It looks like now with the donater Updated version of MCE.Buddy it seems like its working.
I went back to Tablo ripper and de selected Add Metadata.
I have went back and deleted the Movie task for now. I have the setup as follows from CycleJ post: 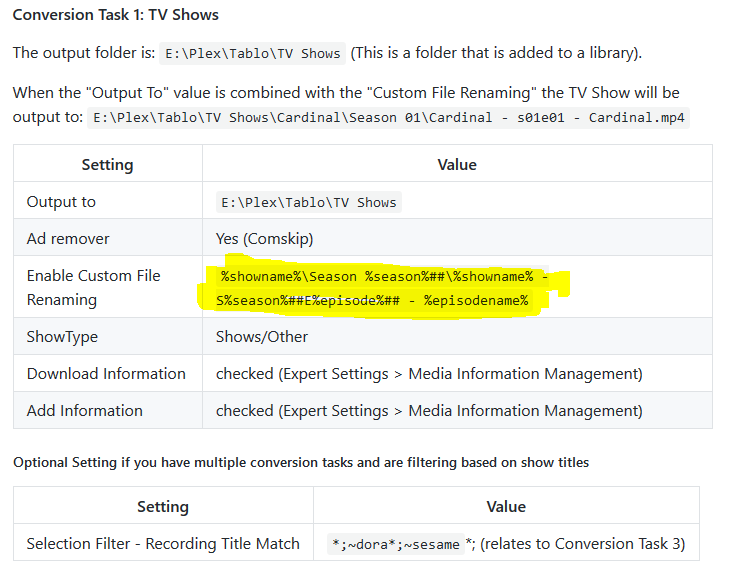 image.png736×574 27.9 KB
Bruce. I did this earlier and it still did the same conversion once for Movies and once for TV.

Its converting a Star Trek episode right now so we will see. Thanks for being patient. Once I get it all working I will try and write up my settings to help someone else.
Bruce September 13, 2017, 1:05pm #11

@FS_3: Once it is going, rather than you writing up something new could you suggest revisions/improvements to the instructions on the TabloRipper github site. I wrote and maintain the instructions we are referring to. I am happy to make changes to help make it easier to follow.

Sure thing Bruce. I just realized there is more documentation from MCEBuddy that I wasn’t aware of too after gaining access via donation.
Thanks again.

@Bruce Does this string look correct or am I missing something?

Just wondering? Can I set up 2 monitor locations ( TV shows and Movies per Tablo ripper) and then have a separate conversion Tasks for each folder so they end up in the correct Plex folder or is a single Conversion task with the ismovie command better.

…‘better’ is so much in the eye of the beholder

When I first go my setup going, tried multiple locations and, if I recall correctly, all conversion tasks ran against all locations. I think that I why I changed to using to one location. (hopefully someone can correct this statement if is wrong)

I prefer the separate conversion tasks, as I sometimes get lost when I am debugging strings like

Ok I thought the first MOVIES in the string should point to “my output folder name” which is MOVIES ,and then if not a movie then output it to CURRENT TV SHOWS\ which is the other folder.

Have you tried setting 2 monitor locations ie one pointed to TabloMCEBuddy\movies then set the first conversion task to movies only,
Then set a second monitor for TAbloMCEBuddy\TvShows with a second conversion task set to Tv shows only? or does it not work like that?
My head hurts…

Sorry, I reread what I typed and it probably wasn’t clear. I did try 2 monitored locations but as I recall all conversion tasks applied to all monitored locations. What I wrote in the guide is what works for me both conceptually and in practice. I really didn’t like using the %ismovie% or %ifseason% in the renaming because they made my head hurt.

Remember, in the conversion task, the ‘Destination’ field plus the ‘Enable custom renaming’ create the full path. So if you prefix the custom renaming in field with MOVIES, everything will be in movies. (Movies and TV Shows). Unless you have the ShowType field selected for movies in which case %ismovie% is redundant and can be removed. 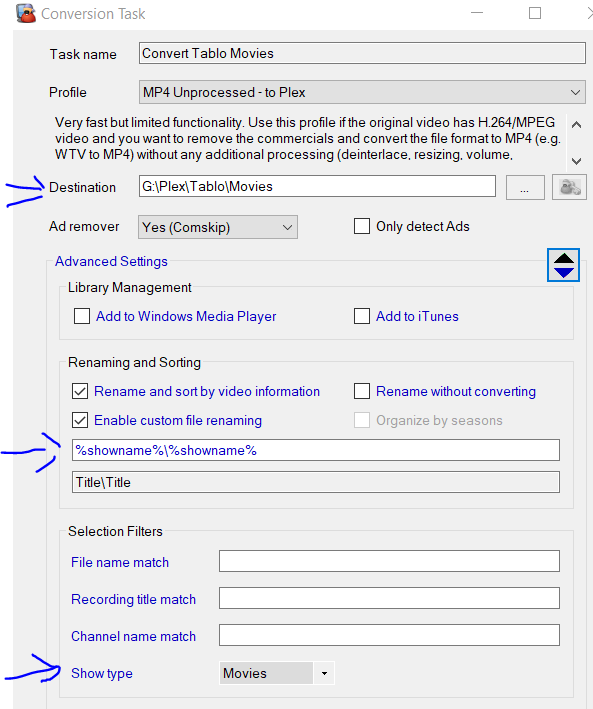 My suggestion is to follow the example as written and get it working - no customization. It is easier to help you as we have a common reference to compare. And if something is wrong the guide we can correct it. Once it’s working and you feel more comfortable with all the pieces you can adjust to suit your needs.

Thank you for the screenshot. That helps immensely. I will set this up after work and we will see.
The above will work for Movies Showtype Movies, so you also have a second Conversion Task set for TV shows of Show type show? 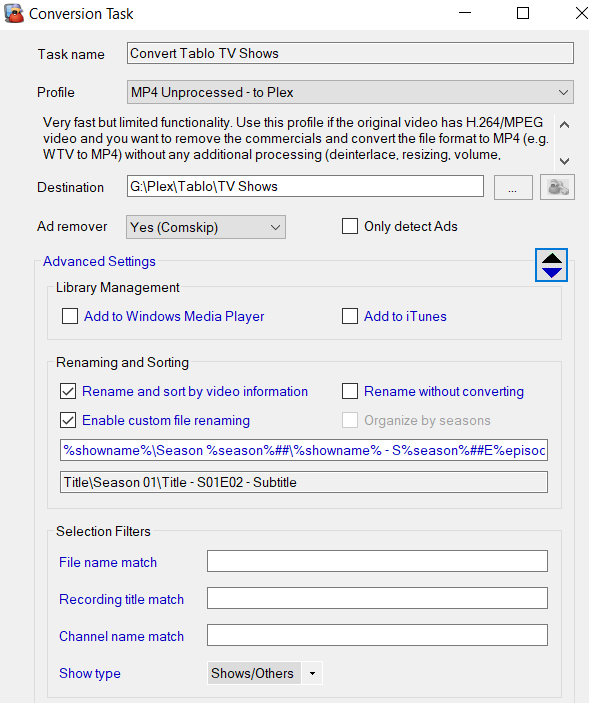 Awesome Thanks Again!
Ok That looks like its going to work.
Again Thanks for the screen shots that clarified things for me.

Set Tablo to record at 1080 and 60fps - MCE Buddy takes 1.5 hours or more to process a 1 hour show and over 3 hours for a 2 plus hour show like the Annual Globe Awards …is this a normal time frame for the high recording sessions ?