Better Remote than the one that is provided

The remote in your HDMI versions are lacking. I wish you would offer a better remote as an option. And one that have a keypad for rapid access to channels would be a great add on replacement for the simplistic remote that you provide.

We don’t have any plans to add a different style of remote control at this time, but I’ll pass your request along to the powers that be.

Thank you. Even support for a universal remote that had a numeric key pad that allowed you to select a channel by keying in a numeric number would work. My wife hates the scroll scroll scroll, select type of selection. She wont let me get rid of our minimal DISH connection and switch to a HDMI TIVO because of that.

Keep in mind that both Roku boxes and FireTV boxes also support other tuners and streaming services with channel numbers besides Tablo, and neither of those remotes have numbers or the ability to direct tune by channel number. I have a FireTV, a RokuTV and a Samsung TV, and none of the remotes have numbers either. A learning remote with a numeric keypad likely would not work because the application itself doesn’t have a way to go directly to a channel by number. Direct channel tuning is kind of a relic left over from broadcast and cable TV tuners and remotes and seems to be going out of fashion. Also consider many TVs accept voice commands (even though Tablo doesn’t) so that eliminates the need for the actual numbers when you can just say the name of the channel. Just sayin’ . . .

Direct channel tuning is kind of a relic left over from broadcast and cable TV tuners and remotes and seems to be going out of fashion.

And yet a Tablo is a broadcast TV tuner(s).

With a media PC, you can point 'N click directly to a channel.

A coax splitter may allow you to use your TV… as a TV, and it’s numeric remote.

That is true of the streaming type of providers but providers like Directv, Dish, cable TV, etc all provide a remote that allows you to direct dial to a specific channel without scroll, scroll, scroll, select. Heck even my TV came with a remote with a dial pad. This is what i see as a lot of the HDMI Tivo potential clientele. You say it is a relic but then I guess I am a relic. 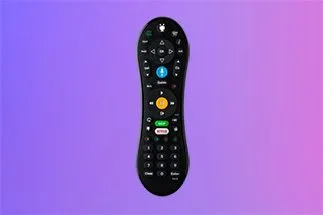 I have always liked the TIVO remote. How about it Tablo?

Why do you need that many buttons on a remote?

This is going to be one of those subjects that will be very user dependent.
My TV came with a 80+ button remote. Of those 80+ buttons, I used only a very small sub-set (~5-6).

For me, the fewer buttons the better. I like the simplified remote that comes with the Roku. This remote is so simple that I don’t even have to look at it to use it. I know where all the buttons are just by feel.

If you are looking for a remote that has lots of buttons and will do everything, maybe one of the third-party “learning” remotes would be a solution.

I think it’s a valid point though, especially based on what someone might be used to. That is, think like a very old person that only knew old style NTSC broadcast television. While they may have been exposed to remote, they are used to being able to punch up channel numbers (and yes, that concept is quite a mess and maybe even wrong today).

I hear people asking all the time for those “take me back to the 70’s” style of remotes, but mostly for the elderly. It’s a thing.

With our desire for “retro”, who knows, maybe such things will make a comeback.

(I would be considered by many to be part of that elderly crowd, but, I’m also pretty technical, so I understand the “new way” of doing things)

Lets say your watching channel 4 at the top of your guide and want to watch channel 70 towards the bottom of your guide. Would it not be simpler and a lot faster to punch in 7, 0, enter than to scroll scroll scroll /repeat until you get to 70? I have about 80 channels on my Tablo and a lot of the things I want to see are at the 70ish spots. New way/Old way what I am saying is a BETTER way…

If the Tablo would support the keypad presses of any remote I would be happy to use it. However, it would take some software in the unit to recognize these keypad entries and act upon it. That is a no-go right now.

Not disagreeing, but we live in a flick flick swip swipe scrolly world. Not that you get quite that experience today from Tablo in a lot of cases.

Again, what I said about our desire for “retro” might be a bigger drive for the return to such things.

Overall, the remote control has not changed much since it’s invention. I just get a kick out of these pictures. 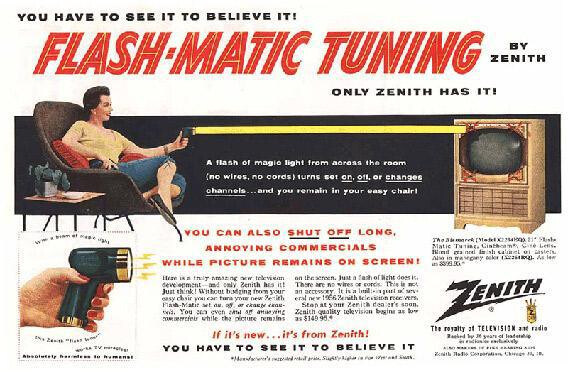 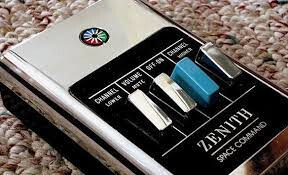 It’s been awhile since I’ve posted on the forum. Hope everyone is doing well.

If you press quick skip while anywhere in guide takes you to the top, should also skip to the bottom with another press.

You made me remember my Zenith remote. Not IR, but frequency based. “you can hear it”

So, when I read the tagline “You have to see it to believe it.” I would add, “wait until you hear it!”

But, changing the channel wasn’t all… sometimes you had to fine tune and, as most of us know, your body position affected the picture quality. So you had to “pose” (maybe while touching the antenna) and potentially hold your pose for exceptionally long periods of time so dad could finish watching the game.

Long time ago (late 1970ish) my church owned an old giant three story home that they used for various services including a place for youth to meet. We would go there between church service and Sunday school to watch wrestling on TV. This TV had a wired tabletop remote with a thick 15 to 20 foot long cable that attached to the back of the TV. On the remote were the available VHF channel buttons in an arrangement like an old rotary phone, same as how it looked on the TV. When you changed a channel on the remote the TV channels would change one at a time in a grind/click sound over and over until it rotated to the channel you selected. It was a lot of fun to use. I wonder if this was an original version of TV remotes.