New cord cutter here. Received my Tablo Quad a couple weeks ago and am loving it! Running 3+ TVs and computers in the house over Google Wifi and the picture quality is better than cable (even on my 100" projector in the basement). Very pleased! So now I need to get an external hard drive. I know Tablo recommends Western Digital Elements and Seagate Expansion. Costco has a 5TB Seagate One Touch for a good price, but not sure if it will work. Interested to see what the community is using and what is working well. Thanks!

I have been using a Seagate Expansion 5TB drive since September 2015 with no problems. Tho I’ve not used a Seagate One Touch 5TB drive, I see no reason why it wouldn’t work equally well with your new Tablo. Good luck.

And for those using the Western Digital Elements…are you using the desktop or portable version? Does the desktop provide its own power source or depend on the Tablo? Thx!

Thanks 3rd Rock…who knew there were so many HD options now??

from my own personal experience Seagate tends to work best.
There was an issue a while back with WD harddrives cutting recording in half
I used an internal Firecuda hybrid 2tb for a while too but ended up switching to a 4tb external Seagate and the performances are about the same as the hybrid drive, except it doesn’t heat as much given the Tablo unit seems to be lacking in cooling when you add an internal 2.5’’ HD

Still using my Hitachi 1TB Touro from 2014 on my original Tablo, but same also on the additional one I bought a year later.

My 6 TB Seagate Skyhawk surveillance drive is the best that I have used with a Tablo over my seven year history. My Quad really gets a workout every day. The mesh enclosure and the drive have been an excellent storage system. Here is a link to my post about it from Feb 2020 : https://community.tablotv.com/t/what-hard-drive-are-you-using/25606/10/

I have 3 WD Element drives (2T), two used on tablos and the other for downloading ipad files…works fine.
All portables.

Same here in my Quad … Got a WD easystore on my Dual and so far no issues (about 8 Mo.). Getting another Quad, gonna try Samsung SSD in it.

Using a WD Blue 2TB SSD in my network Quad, been running well for over 3 years now.

I wanted to use a Samsung SSD (as just mentioned by @RoadToad) but a 2TB was too expensive at the time. So I ended up with a used WD 2TB SSD (what’s in the Quad now). The price for a new WD SSD is about the same as what I paid for used 3 years ago.

@mbellaire … Any issues with th WD Blue in the Quad?

No issues that I’ve noticed.

Note that I am using a network Quad, not one of the HDMI units.

I’ve been using a 1tb Fantom Drive for over 7 years with my original 2 tuner. The drive was several years old when I switched it over to my Tablo. It could be 10 years old now. Spins down when not in use and it is used every day for multiple recordings. I think mine is using a WD drive. Has its own power source. Also using the original Tablo power supply.

I happen to have an EVO 860 1Tb I going to try.
Will post back with outcome after my new Quad arrives.

Also, for what it’s worth, I have a laptop cooler running under my Tablos

Before installing in the Tablo load the Samsung tools to make sure the firmware is up to date on the drive, and to check the TBW.

I have an original 4 tuner Tablo and it appears that my USB harddisk has died. So I’m going to need to replace it.

Is there a maximum size that will work ?? The drives are much bigger now that when I bought my last one.

There are post where tabloTV says they stopped at 8TB, but, technology wise, there is no reason a 10 or 12… or any size won’t work. That’s just the enormous size they trialed.

Running a 12 TB Easystore drive with no problems. 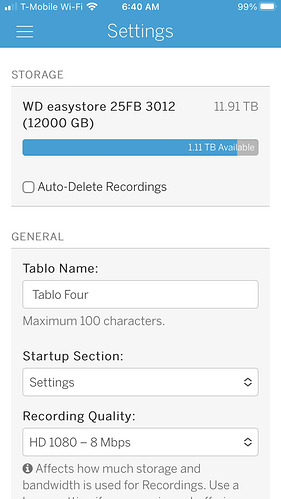