Do you mean the ‘top shelf’ feature? 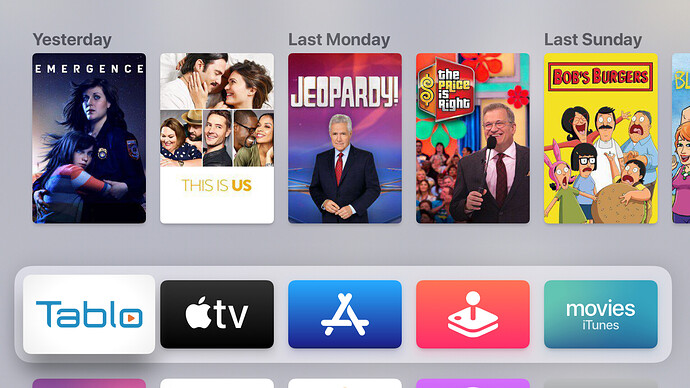 Are you using the latest version of the Apple TV firmware and Tablo app?

Ever since the last tvOS full version update (tvOS 14), this has been going on? The Top Shelf thumbnails have come back a few times, but if the AppleTV is power cycled for any reason, thumbnails disappear until … they reappear. Doesn’t seem to be any pattern, or obvious cause/effect?

Yes, I am using the most recent software for the Apple TV and Tablo. This issue is happening on 2 Apple TV’s in my house For quite some time now… Netflix and all the other provider top shelf/preview screen works fine Period it seems to be just the Tablo app that is doing this.

Mine is doing exactly the same thing. Currently the top shelf has not come back for Tablo in weeks even after rebooting my AppleTV’s and rebooting my network…

We had an issue opened for this but closed it as we weren’t able to reproduce it and the folks who had originally flagged it were just recently reporting it was working again.

Out of curiosity, what happens if you reboot the Apple TV?

Also, what ‘minor’ version of tvOS are you running? (i.e. what are the numbers that come after 14.3?)

As I stated, I have rebooted both Apple TV’s as well as my network.

I have also uninstalled and reinstalled the Tablo app on the Apple TV.

I am not at home now but I am confident I am running the most recent AppleTV OS. I will post the minor numbers as soon as I get home shortly

As I stated, I have rebooted both Apple TV’s as well as my network.

The minor numbers will be of interest to see if there’s any variation. 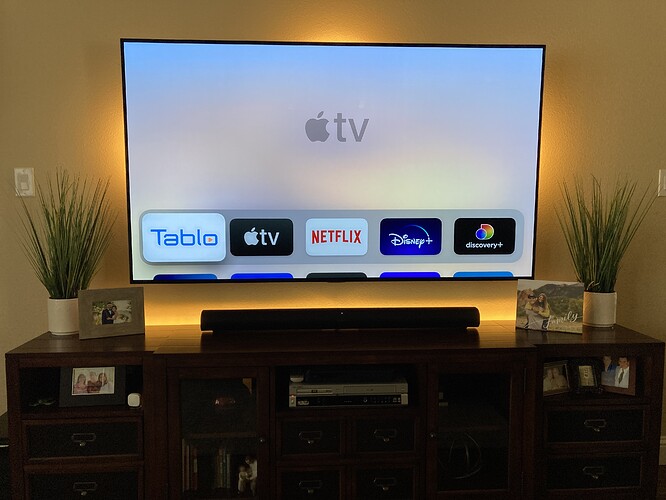 For me, they disappear when I reboot the AppleTV (usually to try and kick a misbehaving app in the butt, the SyFy app has had issues since its recent update for some reason for example).

They seem to usually come back after I’ve used the Tablo app and allowed the thumbnails in the All Recordings section to fully populate? The two most recent times, the Top Shelf Thumbnails didn’t appear even after I went through each section in Recordings and waited and made sure that all thumbnails had generated in each? So, as I said earlier, doesn’t seem to be a definite pattern one way or the other?

This has persisted through at least two Tablo reboots I believe?

The tablo and AppleTV in question are at my parents home. Will look up the specific tvOS version when I can run over there.

We think we know what’s happening… Apple has changed some of the logic that they use to make this feature work. The next time we update the Apple TV app we’ll switch to their ‘new way’ which should be more reliable.

Yes, I was told this would be addressed months ago. I have placed calls to Tablo support and told that you were aware of the situation and that a update would be coming…

Can you give me a timeframe please?

Yes, I was told this would be addressed months ago. I have placed calls to Tablo support and told that you were aware of the situation and that a update would be coming…

It’s been put back on the schedule for the next update but we don’t have a specific ETA to share.

Do you have a UPDATE on this Tablo?

**Any way to push it to me or a way for me to “force” a firmware update?

Any update on the update?

The update is in beta now.

Hi folks - A new update to Tablo’s app for Apple TV is on the way. Your Apple TV should update automatically in the coming day or so, but you can check the Apple App store for the update now. Here’s what you can expect… Tablo Apple TV App Update (v. 1.10.0) Adds new ‘switch Tablo’ interface for users with multiple DVRs Fix for issues with Top Shelf integration with the Apple TV home screen Other bug fixes & performance improvements [tablo_appletv_switch_tablos_gif] If you have any…